We Are Crimea focuses on people's lives after the invasion

Remembering a homeland that was snatched away

Written by Alexander Stemp
Four prominent Crimeans are telling on film the stories of how their lives have been damaged by Russia’s occupation of the peninsula that until its illegal seizure seven years ago was part of Ukraine. The stories comprise a project called We Are Crimea that focuses on people's lives after the invasion, the violation of their rights and the persecutions they suffer.

We Are Crimea is a collaboration of two Ukrainian governmental bodies to present a “project about Crimea we love, we miss, and we are waiting to come back”. The four films will be presented online and at Ukrainian exhibitions worldwide. They feature well-known Crimean personalities and activists, including film-makers Akhtem Seitablayev and Oleg Sentsov, and singer Jamala.

The idea is “to show Crimea through the eyes of people who cannot be there because of temporary occupation of Crimea by the Russian Federation”. The four “will tell what they remember about Crimea and how this loss affected them…

“People for whom Crimea was home, people who used to visit it often or have never been there, they all would see Crimean places that are now beyond our reach through the eyes of our storytellers.

“Virtual Reality-videos will create a sense of presence so that everybody can see and feel places of the warmest memories of Crimea.”

The We Are Crimea project is a collaboration of the Ukrainian Institute and Ukraїner. The former is a public institution affiliated with the Ministry of Foreign Affairs of Ukraine. Its mission is to strengthen Ukraine’s international standing through cultural diplomacy. The latter is a media project that aims to tell stories from all the corners of the country to Ukrainians themselves, who have left behind their small towns and villages without learning anything substantial about them and moved for good to big cities.

Three films have been completed. They all begin: “Since the Russian occupation of Crimea in 2014, the peninsula has become inaccessible to thousands of people. We invited a series of guests with links to Crimea and showed them our footage of the places closest to their hearts.” The featured Crimeans recall with fondness their life and times on the peninsula with its picturesque panoramas of mountains, limestone plateaus, volcanic formations, vineyards and Black Sea beaches – a quintessential place to live as well as a desirable holiday destination.

The annexation of Crimea by the Russian Federation took place in the aftermath of the 2014 Ukrainian revolution. Russian President Vladimir Putin sent in soldiers on February 27, 2014 then conducted an internationally disputed referendum, claiming that 95 per cent of Crimeans had voted to reunite with Russia. The legitimacy of the referendum has been questioned on both legal and procedural grounds. 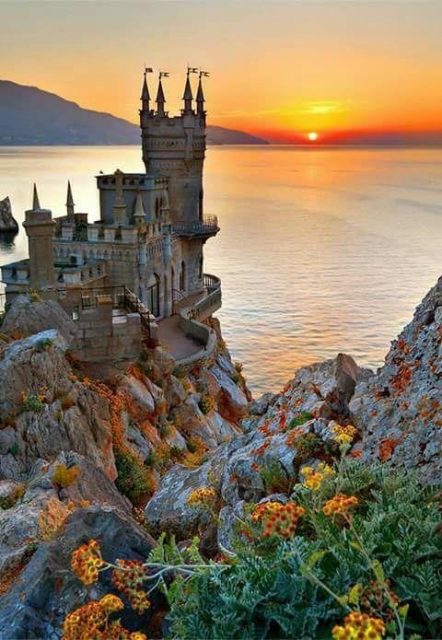 The sudden turn of events deeply shook Ukraine and the world community as a whole. The former Soviet republic is balanced between East and West. A further move by Putin on Ukraine, where he is already backing pro-Russian separatists in a war in the east of the country, could represent a threat to the Baltic republics and ultimately all Europe.

In addition to the We Are Crimea initiative, the Verkhovna Rada, which is the Ukrainian Parliament, and the country’s Ministry of Foreign Affairs have issued a statement to mark the imminent seventh anniversary of Putin’s hostile action. The statement lists continued violations and offences by Russia:

The statement appeals to all international committees, such as the United Nations, the European Parliament, the Parliamentary Assembly of the Council of Europe, the Organisation for Security and Co-operation in Europe, the North Atlantic Treaty Organisation, the Black Sea Economic Cooperation Parliamentary Assembly and to governments around the world, to condemn the temporary occupation of the Autonomous Republic of Crimea and the city of Sevastopol, and the actions of the Russian Federation, and to release all political prisoners.