Written by Mary Murphy
For the seventh time in twice as many years, I have once again boarded the Hungarian language train after nearly a 12-month stopover in the land of anything-but.

Last summer, I signed up for a two-part, four-week intensive online course with a Hungarian university but gave up after the first fortnight. I’d been upgraded to first class when I really belonged in second. It’s difficult to assess my language ability when standardised tests are based on the basics that I’ve had drilled into me over the years. I can pass myself superficially. I know enough to be able to follow the gist of a conversation and nod appropriately, even venturing to exclaim incredulously when required Igazán? Azta! (really, wow).

Simple conversations run around in my head, but when I say them aloud I’m met with the full suitcase of blank looks, raised eyebrows and helpless shrugs. You see, I never learned to pronounce the 44 letters of the Hungarian alphabet – not properly. And as Hungarian is one of those languages where each letter is pronounced in its own way all the time, mastering my AÁBCs is important. And 44 sounds – so many. The English language has 44 sounds too but we don’t have unique letters for each one. Which theoretically should make Hungarian easier to master, right?

I came across an ad by Zina Bozzay offering Hungarian folk singing classes and pronunciation classes. After a few weeks of dithering, I booked myself in for a series of four private one-hour sessions. I wasn’t about to embarrass myself again in front of random strangers.

I didn’t check her out. I didn’t need references or credentials. I simply needed to learn how to speak. She had a Hungarian name. She could speak the language. What more did I need? I wasn’t interested in what the words meant; I just wanted to know how to say them. I wanted to be able to make the sounds that had so far escaped me. And even if I couldn’t make the sounds, at the very least I wanted to be able to hear that what I was saying was wrong. That would be a huge step forward.

When I got over the shock of my teacher not being Hungarian-born – Bozzay is not a native speaker – I began the fun if arduous task of getting my mouth around Hungarian letters. First the consonants, then the vowels, then the pesky consonant combinations with -j, -s and -sz assimilations. We worked on letters, then syllables, then words. Six lessons later, I finally mastered the elusive -gy sound that, in the early Magyar days, had sworn me off dating lads called György.

Somewhat allergic to stereotypical American attaboys, I was chuffed when she congratulated me when I got something right. When I stopped and corrected myself, she was pleased. And I was pleased that she was pleased. Feeling any achievement in a Hungarian class is a rare thing for me.

Zina Bozzay hails from the US of A. Born and reared in San Francisco as the daughter of a Hungarian immigrant, she was exposed to many different styles of music as a child and young adult, including traditional music from various parts of the world. Part of the greater Hungarian diaspora, she became increasingly curious about Hungarian folk music. While living in the States, she played Bartók’s piano pieces and heard modern choral renditions of Hungarian folk songs. When she visited her ancestral home, she heard string bands in restaurants and saw folk dance performances on stage. Enthralled by more than the music perhaps, she wanted to find the source, the village recordings, the old songs. 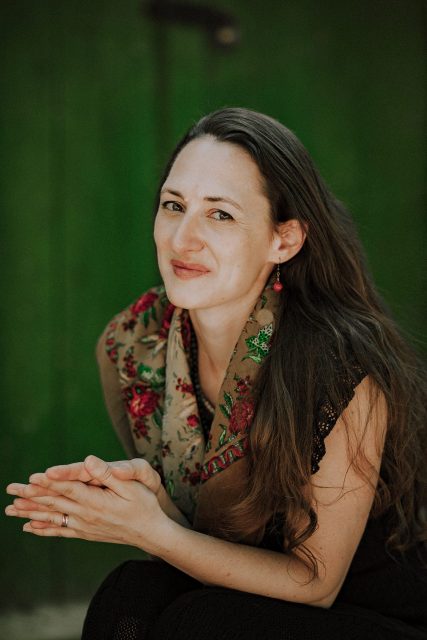 Shortly after graduating from conservatory Bozzay moved to Hungary in search of those recordings. More than a musician or a teacher or a master of pronunciation, she’s a preservationist. For her it is important not just to learn the songs but to also understand the context in which they’ve evolved. One random example is how she learned Idegen faluba’ (In a foreign village) from Pál Pista bácsi, from Tereske, Felvidék, the last living bagpiper shepherd from his region.

Although I didn’t do my due diligence before my classes started, it turns out that I had nothing to worry about. Bozzay holds the highest level of accreditation as an Advanced Hungarian Folk Singing Educator through the Hungarian government. She learned from master Hungarian singers such as Éva Fábián, Gergely Agócs and Andrea Navratil. She’s performed at the Táncháztalálkozó, Hungarian Heritage House, National Theatre and Hungarian Parliament in Budapest, as well as being a soloist at the San Francisco Ethnic Dance Festival at Yerba Buena Center for the Arts, the Golden Festival in New York and the Kárpátok 50th Anniversary Gala in Los Angeles.

With her much-acclaimed ensemble Vadalma (Wild Apple), Bozzay performs in the USA and Europe, everywhere from village halls to major festivals. I watched a live concert video of Esik eső  (It is raining). I was caught by the faces. Each one sat, enthralled. I can well imagine the effect her singing these types of songs would have on the Hungarian diaspora. Thousands of kilometres from Hungary, far removed from the tradition and the folk, listening to their native or heritage language, the familiar music and the underlying emotion … all so moving.

With such strong roots in both cultures, I was curious which won out. Did she feel American or Hungarian?

“I feel both. Because I was born and raised in San Francisco, that’s the basis of who I am – that worldview, that language, that orientation. But if I’m there, there’s “another side” of me that people don’t see (the Hungarian side), just like when I’m here in Hungary many of my close friends and colleagues don’t know my American or English-language side. Both of those identities, worldviews and languages live within me. At this point my life is an absolute blend of both.”

But back to me and my mastering of the AÁBCs. I can now hear my mistakes and have some idea of how to correct them. Huge progress. And I’m convinced that learning Hungarian folk singing is the best way to get to grips with speaking Hungarian. Although musically illiterate, I’m readying myself to join a group class in September. For the summer, I’ll content myself with singing softly behind my mask at Mass on Sundays.

Bozzay has been teaching Hungarian pronunciation to non-Hungarian speakers for more than 10 years, and has students from all over the world in her singing classes. This past year there were participants from more than 35 countries and 15 US States. She’ll be teaching several workshops this summer (in Hungary, San Francisco and Seattle), alongside mentoring work and other private teaching and coaching. Her regular weekly singing classes will resume in September, both in person in Budapest and online. Check her out. www.zinabozzay.com