Written by Mary Murphy
On 20 August, Hungary celebrates its foundation and remembers St Istvan (St Stephen), its first king, who was inducted into the ranks of Hungarian saints by Pope Gregory VII on 20 August 1083. Let's fast forward to 20 August 1993, when Scottish painter Jim Urquhart arrived in Budapest in search of something new. It’s understandable that he was a little taken aback by the celebrations. He drove in, too late for the fireworks, and was left to make sense of the teeming crowds and the smell of cordite. Twenty-six years later, and recently inducted into the ranks of Hungarian citizenry, he's still enjoying the mystery of everything Magyar.
Urquhart’s life to date reads like a series of chance encounters and happenstance, each linked by his insatiable delight in the ordinary and an innate curiosity that has him opening doors others might walk by.

His friend, travel and art writer Michael Jacobs, had suggested he contact Árpád Szabados, then head of Magyar Képzőművészeti Egyetem (Hungarian University of Fine Arts), when he arrived in Hungary. Szabados’ mother was Scottish and had met his father, a Calvinist minister, when studying in Edinburgh. During Urquhart’s first week in the country, at the behest of Szabados, he joined a football team made up of artists and writers and other creative sorts. One introduction led to another and soon he had found somewhere to live, somewhere to paint and that special someone he’d later marry – his wife Julia. 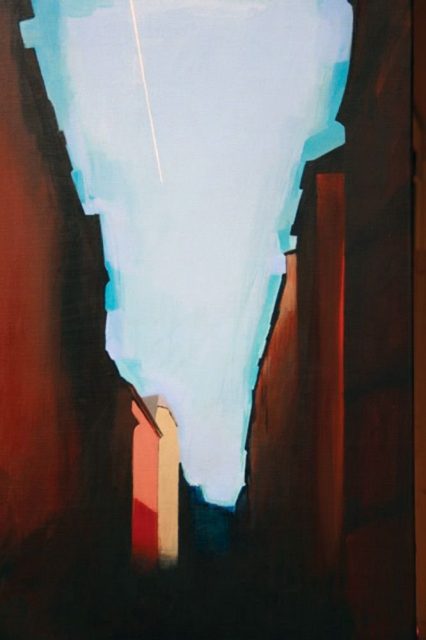 Back in 1968, his time at Edinburgh School of Art was cut short – he wasn’t the type of student they wanted on their books. Not that he lacked talent, but more that his political opinions weren’t exactly mainstream. Urquhart left Scotland for London where his days were spent labouring on building sites, his evenings at his easel.

In 1975, he graduated with a degree in Fine Arts from the Central School of Art and Design, which through many marriages is now the Central Saint Martin’s College of Arts and Design. Ever the pragmatist, he went on to do a post-grad in teaching and then, in his mid-thirties, found himself Head of Department and teaching art, painting with his students in the classroom and having conversations with himself wondering how he’d gotten there. He describes the whole experience of teaching art and being an artist as “somewhat schizophrenic”.

When he turned 40, Urquhart decided that administration wasn’t his forte. Some people are cut out for working 9-5, five days a week, with a few weeks off for good behaviour throughout the year. Not he. But wishes and dreams don’t pay bills or buy paint. He compromised by working as a supply teacher, subbing for full-time teachers when they took unscheduled breaks.

He continued to do this after moving to Hungary, returning to the UK to teach for 4-6-week spells, earning enough to keep him in paint and pálinka for 3-4 months. Around 1997, things really came together. Gábor Andrási invited him to exhibit his work at the Óbudai Pincegalériá. Andrási’s endorsement would open even more doors for the Glaswegian.

In 2000, Urquhart was one of the few foreign artists invited to exhibit at the Millennium exhibition in the Műcsarnok (Palace of Arts), confirmation indeed that Hungary thought well of her adopted son. In 2011, when artist Ilona P. Boros, curator of the Falumúzeum (Village Museum) in Törökbálint, founded Asztal-Társaság (the Table Company), Urquhart was the only non-Hungarian invited to join the group of eight. Although no longer a member, Urquhart credits Boros’s excellent organisational skills for the invitations that followed to exhibit in Hungary and abroad.

It was a busy time. Soon, Urquhart found himself painting for the next exhibition. But when his mum passed away six years ago, his subsequent regular trips to the UK to check in on his dad played havoc with his schedule. Not that he begrudges a moment of the time he spends over there – he enjoys his old man and Hughie certainly seems quite the character. The apple, as they say, doesn’t fall far from the tree.

I first saw his work hanging in the apartment of a mutual friend. The piece was from his train track series. When he lived out by Kobanya Kispest, Urquhart would regularly cross the train tracks, rails of steel that clearly defined the space around them. They made him question the underlying matrix, the mathematics of the physical world, as it were. I still covet that painting and, each time I visit, my bad self harbours notions of spiriting it away in my purse but never remembers to bring one big enough.

Back in his late teens and early twenties, Urquhart was a true believer in abstract. He was a fan of the likes of Wassily Kandinsky, Mark Rothko and, for a brief while, Jackson Pollack. Then he came across the figurative work of David Hockney and found it very “disturbing”. Okay, he thought, figures have their place in a historical context, but in contemporary art? And drawings of everyday life at that? Hockney’s work sent Urquhart in another direction, one that married everyday observances with abstract thoughts and figures.

In his telephone box series, the abstract representation of a telephone box is set off by a dress of the same colour in a shop window in the background. The dress is his nod to the idea of a person – but when you put a person in a picture, they become the focus, and this wasn’t what the series was about. 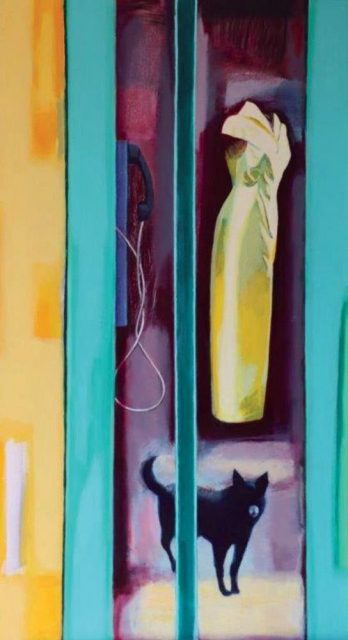 Urquhart’s bathing series is his take on a historical concept and context. Rather than painting cherubs in the sky, his bathers have that same angelic sense but in the water. “Abstraction”, he explained, “the colours and the content…they’re like the vocals in a piece of music.”

I am particularly taken by his vapour trail series, inspired by his musings on where everyone is coming from and going to. He sees the streets of Budapest as valleys, sided by tall buildings, creating a triangle of blue intersected by the white airplane path – something akin to the Kandinsky triangle, and the abstract concentration of power.

Rachel Lebowitz explains it well in an Artsy editorial:
Kandinsky’s philosophy about spiritual life and art is founded on the idea of a three-tiered triangle containing all of humanity […] The triangle is slowly – nearly imperceptibly – moving forward and upward, towards a higher level of enlightenment. […] The most spiritually elevated people exist in the top section and are, as such, the smallest group; they see today what others will not understand until tomorrow.

The apex of that same triangle is also seen in Michael Angelo’s “The Making of Adam” when God and Adam touch fingers, he told me. His art classes must have been interesting, I thought.

Commissions aside, Urquhart paints for himself. “It’s difficult enough to guess what people like to eat, let alone to try to second-guess what they’d like to buy,” he said. He sold one of his metro steps series to someone who had just recovered from a serious illness. In those steps, leading out of the darkness of the underground into the light of day, they saw a visual connection with their own escape from death.

For Urquhart, success isn’t measured in high-priced canvases or rave reviews. He’s not searching for international acclaim, although his paintings hang in rooms in North America, South America, Spain, France, Germany, Hungary and the UK. He paints what he sees. His work chronicles the everyday, the mundane, but at his hand, they take on new life. He loves to paint and paints what he loves: life as it’s being lived. His measure of success is being able to do what he wants to do on a daily basis.

In September, Urquhart will exhibit alongside two other Budapest-based British painters, Michael Pettet and David Stuart Sutherland. The one-night show, hosted by the British Ambassador to Hungary, Iain Lindsay, and his wife, Bridget, at their Buda residence, is sponsored by the British Chamber of Commerce in Hungary. Each of the artists will have their own room and will be available to chat.

Don’t expect to see too much by way of a written explanation of Urquhart’s art, though. As he says himself: “If galleries have to say a lot about your paintings, perhaps you should consider writing a book instead.”

Mary Murphy is a freelance writer and public speaker who thinks, travels and likes her cemeteries. Read more at www.unpackingmybottomdrawer.com | www.anyexcusetotravel.com | www.dyingtogetin.com