Daring to be different

Written by Mary Murphy
When the sun comes out for the summer and the temperatures start their inevitable climb towards the unbearable 40s, Hungarians living in urban areas gravitate towards the water. Whether it’s the Balaton or Velence, the Danube or the Tisza, or any of the waterparks and spas dotted around the country, the water beckons.

While the crowds might differ in their makeup, they’re all heading for a strand.

I spent a few formative years near the southeast coast of Ireland. What seemed like every day of every summer my mother would pack us into the car and take us to the strand. It would be a decade or two before I’d meet the whole beach concept. For me, the ocean’s apron was always a strand, be it home to sand or pebbles.

When I first came to Hungary and realised that the Hungarian Sea was really a lake and that the country was in fact landlocked (you’d think I’d have been a little more prepared), I was befuddled by the many references to strands. No sea. No sand. No strand. Right? But it’s not that simple. Technically, a strand is defined as the shore of a sea, lake or large river. And Hungary is quite creative when it comes to maximising this space.

The strands around the Balaton spring up amidst the reed beds. Those on the Danube appear and disappear depending on how high the water is. But no matter what part of the country you’re in or which body of water you’ve chosen to holiday beside, the offer is pretty much the same: lángos (a deep-fried flatbread covered in toppings such as sour cream and cheese), hamburger and fish.

I was quite excited a few years back when I was introduced to The Spot Grill & Bar at Vonyarvashegy. [I hope it’s still open.] There, the chef, probably tired of people dithering between ordering the summer staples – a burger or a lángos – decided to join the two and instead of a burger bun, encased the patty in the deep-fried dough. But sadly, since then I’ve failed to get excited about the fare on offer by Hungary’s strands and had resigned myself to the sameness of it all. That’s not to say it’s not good; it’s just all the same.

Think of the high street in any European town or city. Imagine the line of shopfronts and ask yourself how many of them are international chains. Yes, Boots in Ireland and the UK might not be visible in Hungary or Slovakia, but the latter have their equivalent in Rossmann and DM. Starbucks, Costa and the plethora of fast-food franchises all add to the sameness.

So, when we turfed up at Meteor Beach Bar in Szigetmonostor on the popular Szentendre Island, my expectations were so low as to be non-existent. I braced myself for the ubiquitous plastic baskets and trays, flagships of the disposable nature of fast food. Whatever pop music was playing over the speakers was failing miserably to resuscitate the holiday spirit on a chilly overcast summer’s day.

The chalkboard menu caught my eye. The fish that day was sügér (perch), the flekken (BBQ meat) was pork and the cheese was goat. I felt a peculiar sense of excitement that Meteor might be something different.

Yes, the furniture was beachy – simple blue and white chairs flagging wooden tables, the colours tying in nicely to the logo. The umbrellas added a feeling of security against the threat of more rain. The bartender was busy mixing cocktails that the place is known for. To my surprise, and still rankling at the indignity of a naked Bloody Mary served by a VERY upmarket place in Budapest many years ago, the one delivered to our table was decked out in greens. I wished I wasn’t driving and made a note to come back and overnight just to work my way through the menu. I want to try the Wrong Island. 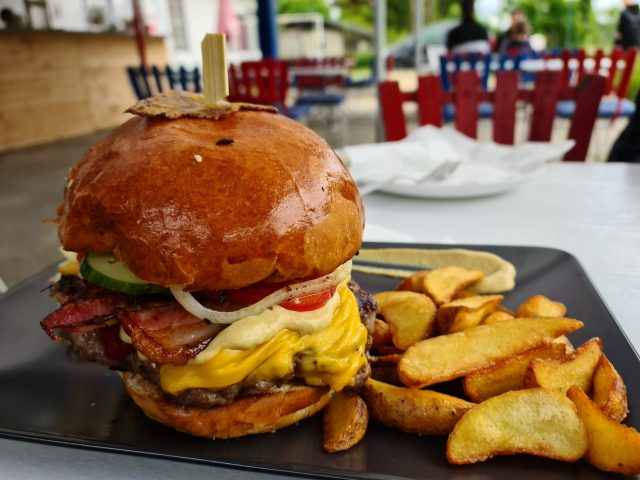 A starter plate of pita breads, humus and salad was fresh and tangy. Perfect to take the edge off. I went with my usual benchmark choice – a burger. The others couldn’t decide between the fish and the grilled cheese, so they got both. The chips were cooked to perfection. The coleslaw was nipping at the heels of the exquisite stuff my mate BE makes. And the burger had the irregular shape that betrayed its homemade origins. I sampled the fish and the cheese and looked a little enviously at the foamed parmesan and the beetroot mouse complements, happily reeling from the surprise that comes with getting real plates and proper cutlery at a beach bar.

I didn’t think I could fit any more but I can never turn down a Sacher torte. When the square slate was put in front of me, I did a double-take. Normally I’d be right in there, but this time I took a few seconds to enjoy the sight of a masterfully slated dessert. I looked around to make sure that I wasn’t in some posh restaurant. But the rustic simplicity hadn’t changed. 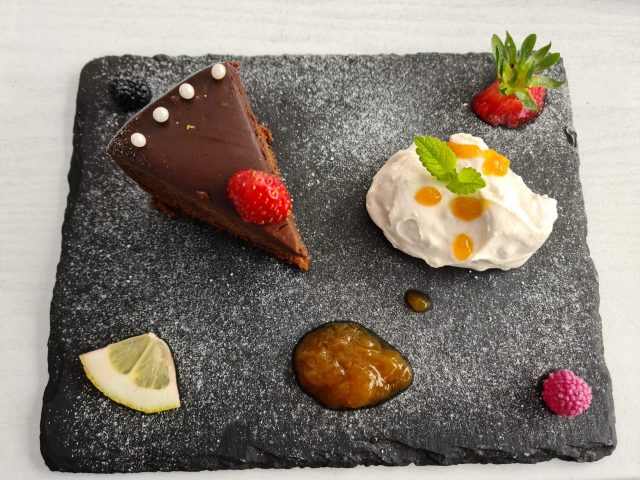 Markó was busy mixing cocktails. János, a semi-retired chef with international experience who seems to delight in making the ordinary extraordinary, was doing what he does best behind the grill. The waitstaff were on the ball and happy, despite the weather. Tables were beginning to fill. Couples, Families. Cyclists. Locals. Holidaymakers. Hórany strand itself was under water. We could see across to the boats at the other side of the river and it didn’t take much imagination to fast forward to later in the evening when those with the wherewithal to do so would sail across the river to enjoy a colourful sundowner.

If you find yourself hungry and in the vicinity of Szentendre Island, look this place up. If you’re day-tripping from Budapest to see Szentendre, Esztergom, Visegrád or Vác, factor in the extra time to detour. You won’t be sorry. It’s a classic example of what can be done when you dare to be that little bit different. 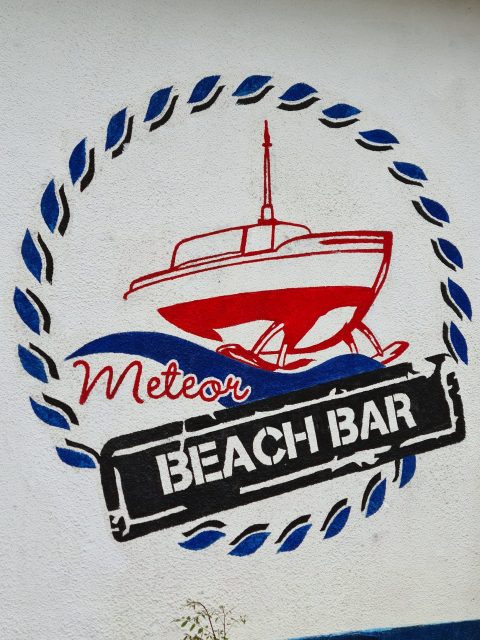