Written by Mary Murphy
I have a weakness. I have several weaknesses in fact, but more than any of the others, this one I find impossible to resist. You can keep your wine. You can have your chocolate. You can save your flowers. What gets me every time is bread. Fresh bread. With a wad of Irish butter. There is nothing tastier. It works. Every. Single. Time. And it’s not just an Irish thing, it’s a Hungarian thing, too. Well, maybe not the butter.

Attila and Kinga Pécsi, owners of Budapest’s latest bakery offer, have tapped into this love of all things doughy. Arán Bakery, their modest premises at 23 Wesselényi utca in the heart of the city’s VIIth district, has been open just four months and already has customers coming across the river from Buda each week to stock up on their loaves.

After tasting their Irish soda bread, they’ve been added to my list of must-visits when I’m in the city. Their breads, made from scratch, are good for three to five days. One customer sent a photo of 13-day-old bread toasted and said it was great. For them, quality ingredients are key. The flour they use is 100% additive-free from Garat Malom in Mohács and their coffee comes from the One Eleven roastery in Sopron. Both are for sale in the bakery. 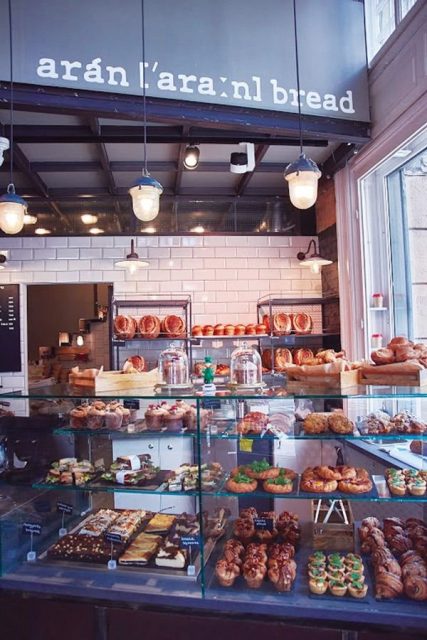 The pair have spent the past ten years in Dublin living in the shadows of St Patrick’s Cathedral. Attila managed the funky Clontarf restaurant Fishbone and Kinga trained front-of-house staff for the Italian chain Milano while finishing her training as a baker. Their son, Aron, was born in Dublin and the two identify strongly with the city. “I’m a Hungarian woman”, Kinga says, “but I’m an Irish baker.” They miss it. They miss the people. They miss the laid-back way of life. And after ten years of being away, now that they’re home, their life in Budapest has an expat feel.

The whole concept of “grab and go” is a relatively new one to the Hungarian psyche, explained Attila. Cafés tend to focus on keeping people at the table for as long as possible. It’s a concept that many tourists identify with though. Located as they are in the heart of District VII, the unofficial AirBnB centre of Budapest, a lot of their customers are visitors buying sandwiches, pastries and coffee, with most of the bread bought by Hungarians.

Practically reared in a restaurant himself, Attila is the management side of the partnership. Kinga is the baker. She woke up one morning in their flat in Dublin and decided she wanted to try her hand at baking. Her first cake was a traditional Hungarian dobos torte, a sponge cake layered with chocolate buttercream and topped with caramel. It wasn’t bad, she says, modestly.

Determined to do better, she enrolled on the Bakery and Pastry Arts Management degree course at Dublin Institute of Technology and learned her trade. Graduating last year, Kinga’s newfound understanding of the technicalities of baking and a growing passion to produce quality products that customers could enjoy, coupled with Attila’s management experience, led them back to Budapest.

When their friend and silent partner found the premises, the temptation to return to be nearer family as Aron grows up was too much to resist. They started work on the renovation in January and opened the 60-square-metre premises for business on June 24. Four months in and they have four full-time bakers working with Kinga to keep the shelves stocked and the customers sated.

Baking isn’t an easy life. Until chatting with them, I’d never fully appreciated the time that goes into a loaf of bread. I knew it was labour intensive but I hadn’t quite added it all up.

Arán Bakery produces 200 loaves of bread a day in addition to their sandwiches, almond croissants, muffins and assorted other pastries. Each morning Kinga is up at 2.50am to get in the bakery by 4am where the ovens, set to a timer, are already warm. One baker starts on the bread, another on the sandwiches, a third on the pastries and the fourth starts kneading the dough. It takes two days to make one loaf a bread. Mad, when you think of it. They’re open six days a week (8am to 6.30pm Monday to Friday and 8.30am to 3pm on Saturday) but even on Sundays the dough must be kneaded for the next day. It’s relentless.

Kinga finishes about 3.30pm to pick up Aron from kindergarten and goes to the park to play with him – her second shift begins. Attila does the daddy stuff in the morning before coming to work for 8am. He’s there all day as needed. I wondered aloud how they’d last the pace. “It’s like our second baby,” they agreed. “We love it.”

I felt a curious, if irrational, sense of pride. The two lived in Dublin long enough to pick up its ways. Their English is conversational, nuanced with the tell-tale soft “t” that makes Irish-English readily identifiable. It felt as if I was talking with friends from home. They’ve adopted my country and I’ve adopted theirs. That natural affinity which novelist James Michener identified back in 1957 when he described Hungarians as the Irish of Eastern Europe was palpable.

I felt strangely vested in the whole endeavour, willing them to succeed and not doubting for a minute that they will. Theirs is a quality product, baked with passion. It represents the best of both their worlds. With mince pies on the menu for Christmas and soda bread a staple, Arán Bakery will no doubt become the place to bump into other expats in the city, a focal point for the Irish in Hungary and indeed for Hungarians who have returned from Ireland and miss their home from home.

Arán, by the way, is the Irish for bread, a nod to the ten-year experience that has shaped who they are and a souvenir of Ireland that they’ve brought home to Hungary. May the dough rise with them.