Written by Mary Murphy
With the advent of the summer sun, the annual exodus from Budapest is in the offing. Visitors to the city during July and August are often surprised at how empty it is of Hungarians. While Parisians head to the coast and Milanese head for the mountains, Budapestens head for the Balaton.

Those lucky enough to have a summer house near the lake will be making full use of it. Others will be scrambling to pay what a friend describes as “cheeky” prices for cabins, cottages, apartments and villas – anything to get out of the city.

The smart ones, those who don’t need the nightclubs and the bars, will perhaps look farther afield, to villages within, say, a half-hour’s drive of the lake. Cheaper. Quieter. More relaxing. Who knows? This year might be the year one of Hungary’s little-known gems – the Kis-Balaton – comes into its own.

The new Visitor’s Centre is open for business offering guided tours. The water buffalo at Kápolnapuszta are waiting to be admired. Kányavári Sziget, best visited in the early morning to avoid the crowds and the mozzies, is the perfect place for a picnic breakfast. Walk. Drive. Cycle. The choice is yours.

I read recently that bike shortages will likely last into 2022, such is the demand globally. It seems like the world and her mother have taken to two wheels as a way of hanging on to their sanity and staying healthy during this pandemic. The number of cyclists around the Balaton doubled last year and is set to increase even more this summer. For those who like a challenge, there’s the Balatonkör,  a 200-kilometre cycle ride around the Balaton. Unlike the Tour de Pelso where everyone cycles as fast as they can around, the Balatonkör is more relaxed. But there are plenty of other routes to choose from.

Cycling the Kis-Balaton is another story. It’s much shorter, for one. And it offers a completely different experience with more culture and fewer crowds.  Until quite recently, the one drawback of travelling around the K-B was the lack of places to eat between Zalakaros and Zalaszabar. Yes, there’s a small pizzeria in Zalakomár and the sometimes-open Katica Csarda in Zalavár, but there was a whole stretch that almost dared you to go hungry, waiting for someone with a vision to do justice to the opportunity.

Enter Kristopher Purdy of the Ujlaki family from Kaposvár.

Born in Florida, schooled in Belgium and trained in New York, Purdy graduated from the French Culinary Institute under Jacques Pépin with a degree in Classic Culinary Arts. First place in a cookery competition landed him a job in his choice of three-star Michelin restaurants. He chose Thomas Keller’s Per Se.

2014 saw him in Budapest with stints at two of the city’s six Michelin-star restaurants, Costes Downtown and Babel Budapest. It was all about fine dining. In 2018 he got the opportunity to move to Somerset, UK, to join a team intent on elevating the restaurant at Ston Easton Park Hotel to Michelin level. One of the hotels in the Von Essen Group, headed by the bankers’ darling  Andrew Davis, the hotelier’s quest was thwarted by Covid.

Like so many around the world whose lives have been derailed or rerouted by Covid, Purdy had to decide what next. He moved to Kaposvár, to his mother’s homeplace, and got a job in La Prima Trattoria. Here, away from the magic that embodies all things Michelin, Purdy rediscovered the essence of hearty, homemade food. 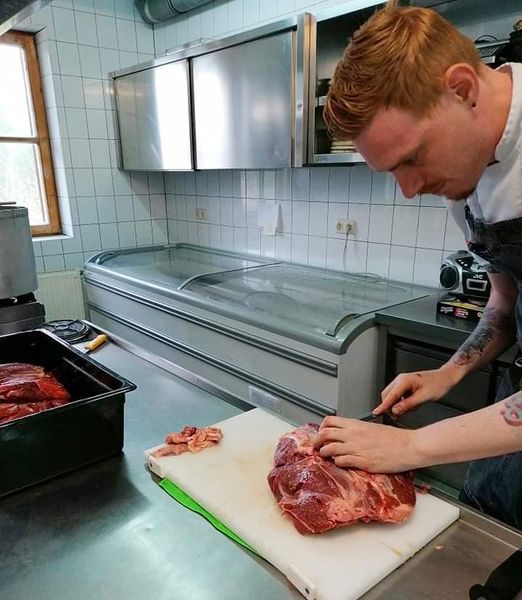 A fan of piquant spicy Kansas City BBQ and a master of fine dining, a plan began to marinade in Purdy’s mind. What would happen if he fused the two? At first glance, they don’t exactly go together, not like pepper and salt or sweet and sour. When he told me this, I had visions of a French waiter lifting the lid of a silver entrée dish to reveal a slab of pork ribs and a side of slaw.  But then the penny dropped.

Earlier this month I’d seen the new billboard in Balatonmagyaród advertising the opening of the Maximilian BBQ & Grill slated for noon, Saturday, 15 May. I spent a few days salivating at the thought of real BBQ. I was excited when I heard that Purdy was American. Americans know their BBQ. I have fond memories of the WC Handy Blues and BBQ Festival in Henderson, Kentucky. My mind was conjuring up plates filled with spicy wings, fat ribs, pulled pork and proper coleslaw. My dreams were filled with real burgers and wheel-like beer-battered onion rings.

I got there late. The others had ordered for me. I tacked on an order of Max wings so that we covered all the bases. I asked about the onion rings to make sure they were homemade and added a portion of them, too. Purdy double-checked that I was with the party that had just ordered me a Max burger and twisty fries. It was a lot of food, he said. But I’d not eaten a thing all day. I’d come prepared. 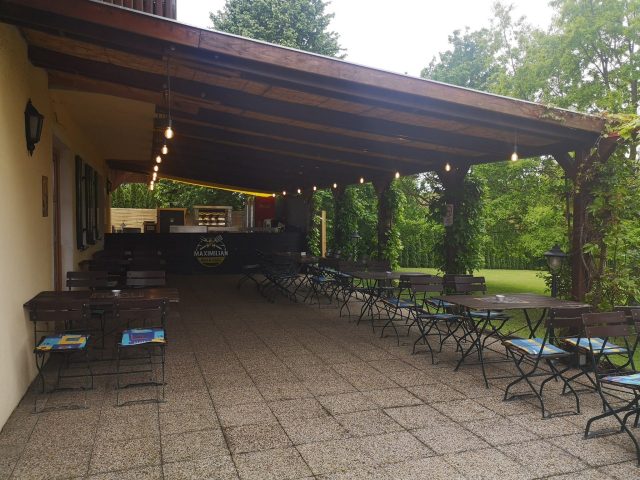 Between us we covered only a fraction of the menu. We left the quesadillas and the BBQ sandwiches for next time. I eyed up the plump chickens turning slowly on the rotisserie in the company of sizzling csülök (I love a good pork knuckle) and made a note to self. But I’d come for the burger and the onion rings. And I was a tad disappointed. For me, it’s all about texture.

Remember that penny I was talking about earlier?

I didn’t know about the fusion of fine dining and Kansas City BBQ. I wasn’t in on the grand plan, the big dream, the vision for the future. Purdy grinds his beef twice so that he doesn’t need to add eggs to bind the burger. The meat’s own collagen does the job for him. He purées his onion before he batters the rings in forms, a far more delicate offer than the hoops of barely-cooked onion I was craving. And he makes all the sauces and marinades himself. He has plans to introduce suckling pig (pre-order necessary) and to have themed weekends and chef specials. The craft beer is matched with Balaton wines and there are plans afoot to source wines from Zala county.

Regular readers will know that when I fixate, I fixate. That said, I cleaned my plate. I had more than my fair share of the spicy max wings. (Note: the regular sauce is spicy, so only ask for spicy if you’re sure you can handle it.) And, because I was in the company of other foodies, I got to pick from their plates, too. Bottom line: I’ll be back.

I’m sure that in time, as the vision continues to unfold, we’ll see real glasses and sustainable takeaway boxes. The place has masses of potential. The large terrace overlooks an expanse of green grass shaded by trees. It’s quiet enough to hear the birds sing. And it smells divine.

Kudos to the mesterszakács (master chef) for having the gumption to open up when so many are closing down, and for having the foresight to recognise the opportunity embodied by the hundreds of hungry cyclists and the carloads of visitors that will no doubt descend upon the Kis-Balaton this summer. Once word gets out, Maximilian BBQ & Grill could well become a destination in itself.

Balatonmagyaród, Petőfi u. 81B, 8753. Open weekends until end of May and then every day from noon until 9pm from 1 June.