Written by Marion Merrick
The village of Kisszékely is unlikely to be on many people’s “must-see” list of destinations to visit in Hungary. With its population of just 200, it nestles east of Lake Balaton, bordered by forests and completely hidden among the rolling hills. It is what Hungarians call a “dead-end” village: the one road leading in eventually petering out into woods at every turn.

There is a tree-shrouded fishing lake at its borders, one small shop, the primary school and the Panzió (guesthouse). People stand talking in the road, exchanging local gossip; the old, plastered houses bake in the sun; the scent of elderflower blossom is thick in the air, ready to make into syrup or wine, mingled with acacia whose blooms will make the most delicate of honeys.

Up a bumpy lane is the small hillside graveyard and, beyond that, the hunting lodge with thickets full of wild boar and deer. Life moves slowly and quietly here as it always has – even the bus only comes three times a day, and it too must turn before the woods and retrace its tracks to leave again.

It was in this remote hamlet that Sue and Eric Korkis decided to settle and begin a new chapter of their lives in 2017, with one of their children, having been inspired by a BBC programme featuring British people embarking on similar ventures. Disenchanted with their lives in Hull, and having taken early retirement, they were seeking a new challenge and a fresh start in an idyllic setting. 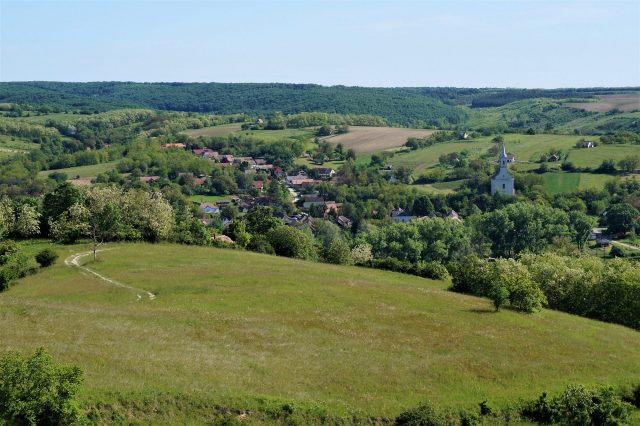 “The first year I found it quite difficult to adjust,” says Sue. “I didn’t speak the language, though Eric had picked some up during his year’s house-hunting. He’s a translator, he knows a lot of languages and so he soon learnt what he needed. I’m now doing an online course.”

When I ask whether they ever felt isolated, Sue replies: “Yes, we are isolated but we chose to be isolated. But there are two young women in Kisszékely who can speak some English – one of them lived in London for five years and she helped us. The older people are very friendly, they’re curious about us, they make eye-contact, always saying hello – they accept us.”

Sue lowers her voice. “There is one person though who clearly wasn’t pleased that foreigners had come to his village” she continues, “but everyone else has bent over backwards,” she adds quickly.

It has taken almost four years to complete the renovation of their house, and this also brought its challenges. “Because we’re English-speaking, the price of everything goes up,” says Sue. “We’ve come to accept that’s just the way things are – we know there’s a lot of poverty in Hungary. But as Eric’s learnt enough Hungarian he’ll tell the workmen to give us Hungarian prices – and you know, they now negotiate with him!”

Unexpected illness, requiring hospital care and surgery, affected them both in their second year in Kisszékely, bringing home the fact that they had not considered their choice of location in relation to medical services. Eric was first in Pécs hospital (a two-hour drive from Kisszékely) followed by time in Szekszárd (an hour away), while Sue was also in Szekszárd hospital months later.

“We were frightened – neither of us had thought about the health system,” explains Sue. “You hear things about Hungarian hospitals…. but the care Eric got was incredible! And for me too, the nursing staff were exceptional.”

In spite of their distance from medical services, Sue remains adamant that Kisszékely offers everything else they want from life. “I love the seasons in Hungary, the countryside, and there are several nature trails around the village. I have my camera with me all the time and I take photos every day. Kisszékely was voted the second most beautiful village in Hungary! I write a blog about life here and post my photos there.”

Sue’s obvious interest in village life and local culture has led her to acquire skills already fading in urban settings: staff at the Panzió introduced her to bottling tomatoes and peppers that saw them through the winter; her love of gardening meant adapting to local soil conditions and plants; and she’s joined the village Facebook group where a post signalling the loss of their beloved husky was met with a quick response and the dog returned. 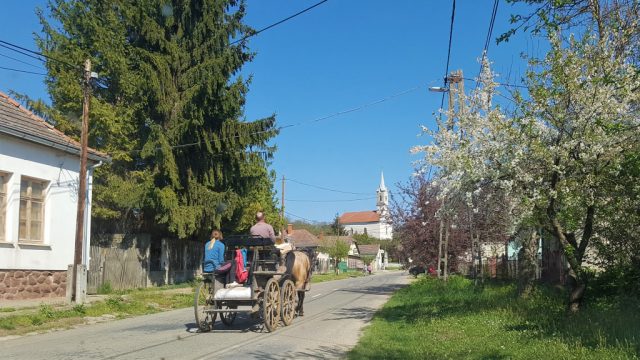 They were invited to spend their first Christmas with the proprietors of the Panzió, as well as attending a visiting music fair, and the harvest procession where villagers don traditional costume and start the day with a 7am pálinka (brandy). “I did find it strange when we first arrived and saw people already outside the local pub at seven in the morning!” reminisces Sue.

However, some aspects of country life defeated even their best efforts. “We like eating lamb, and as we’ve got a lot of land – far too much land, actually,” she adds, “we thought we’d get two ewes and a ram and breed sheep for meat. They were delivered by lorry – the sheep had their legs tied for the journey – and the two men lay them in the garden to cut the ropes. I was busy making a video of it all, and it was only when the sheep suddenly jumped up and bolted that I realised one was heading for the house door we’d left ajar, and the other two had found the open garden gate and were making off up the main street of the village! The men couldn’t believe we’d been so stupid, but after some eye-rolling they ran off after the sheep and managed to get them back.”

Sue sighs. “We kept them for a while but we realised sheep farming probably wasn’t for us, and we had them despatched for meat. We had originally thought of keeping llamas – really!” she says as she observes my incredulous look. “The farm up the road has some! But we thought better of it after our sheep experience.”

But what advice would she give to anyone contemplating such a move? “Definitely find out what access you have to hospitals and beware of buying more land than you can manage. I miss my children and grandchild but that wouldn’t have been so bad without Covid. But we love it here, and English friends have also bought a summer house in the village!”

As I drive away, I see the blue stand pumps lining the grassy verge – Sue and Eric’s gardener has neither electricity nor running water in his home – and pass two tractors Sue mentioned that “look as though they’re from the 1940s.” I watch the midday bus turning full circle in the road in order to leave the village, continue up past the farm where I spot a llama grazing among the donkeys and sheep, and I hear Sue’s parting words echoing in my head: “We’re going to stay here – we want to explore so much more of Hungary!”

In this series of articles, I’ll be looking at those who have come to Hungary to pursue much more “local” Hungarian lives than the usual expat working in the capital for an international concern, and finding out what brought them – and what’s keeping them here…