Welcome to that ‘wow’ feeling

We’ve checked in at Reception and entered Room 116 of the five-star Hotel Lone in Rovinj after having been kindly upgraded from what would surely have been a premium room anyway to something even grander – most notably this is one of the Lone’s 16 rooms with a private plunge pool on the balcony, right outside the large picture window facing the autumn colours of the adjacent Golden Cape Forest Park.

Hotel Lone is operated by Maistra Hospitality Group, one of the leading tourist companies in Croatia and part of Adris Grupa, a diversified conglomerate that we later discover is based in an old factory whose tall brick chimney we had noticed near the Rovinj waterfront. The building once produced tobacco products but now houses a few dozen of the more than 8000 Adris employees around the country working in insurance, tourism, healthy food and real estate. Adris and Maistra are a combination that is going places.

When The Budapest Times was last in Croatia’s Istria peninsula three years ago Maistra was offering a portfolio of 10 hotels, eight tourist resorts and six campsites in Rovinj and Vrsar, two Adriatic coastal towns only 30 kilometres apart and separated by a fjord. Since then Maistra has expanded quickly with five hotels in the capital, Zagreb – the five-stars The Sheraton and The Westin Zagreb, the four-star International, the three-star Jadran and the Panorama that is being reconstructed as the future Zonar to open in early 2023 – and five properties at tourist hotspot Dubrovnik – the five-stars Sheraton Dubrovnik Riviera and Hilton Imperial, the four-star Mlini and three-star Astarea hotels plus four-star apartments and villas. A further venture is planned in coastal Split.

Currently, the Maistra choice runs to 18 hotels, 11 tourist villages and six campsites across three different brands. These three are Maistra Collection, described as a sophisticated collection of unique luxury hotels in breathtaking locations, Maistra Select, these being choice hotels and resorts in the most beautiful seafront locations, and finally Maistra Camping, inspired by the outdoor experience  in Istria’s most desirable spots at Rovinj and Vrsar.

These span five-, four- and three-star categories for most budgets, and one of the jewels is Hotel Lone, which while it may be only one of a group of three adjacent five-stars in the Maistra Collection – the others being the Grand Park Hotel Rovinj and Hotel Monte Mulini – it has the distinction of being the first member in Croatia of Design Hotels, a United States hospitality association that awards this designation to handpicked boutique and design-driven luxury hotels. Hotel Lone opened in 2011 and there are currently 287 such establishments worldwide.

They are “a handpicked portfolio of one-of-a-kind properties”, Design Hotels says, and to earn the classification an establishment must be notably focused on its visual concept, its architecture, its aesthetic style and its interior décor. The appearance is the main appeal and the aim is to evoke a “wow” feeling in the visitor.

Also that country’s creative minds should have been involved, whether they be architects, conceptual artists or product, fashion and graphic designers. Thus Hotel Lone’s architects were 3LHD Studio of Zagreb and the external design has a facade that is described as defined by dominant white horizontal lines – terrace guards designed to evoke the image of slanted boat decks. “Like a luxury cruise liner nestled on the hillside,” according to Design Hotels.

Agency Bruketa & Žinić OM of Zagreb conceived and oversaw its visual identity. Attention was given to ensuring that all the interior design elements were created specially. In addition to the overall architecture, when designing the interior 3LHD and the designers from Numen/For Use of Zagreb chose the surrounding ambiance as the signature visual element that also defined all views of the interior.

The interiors and the furniture were designed and chosen especially in order to achieve a distinct and recognisable identity. Numen/For Use did the furniture, and the 264 rooms and suites contain the Satyr armchair, winner of an award for Best World Sofa in 2007.

The fashion studio I-GLE designed the staff uniforms and other textiles. Artist Silvio Vujičić created graphics on fabrics for the rooms, the designs apparently based on frescos in Croatian churches of the Middle Ages. Installations in the hotel lobby were made by a group of innovative artists. Studio92 designed the 1700-square-metre wellness and spa centre, while Studio Kappo did the landscaping.

As mentioned, Hotel Lone sits in the Golden Cape Forest Park, a unique and protected region, and somehow the outside comes inside with you upon entering. On the ground floor, trees reach up right to the level of the first floor, their tops at eye level in the breakfast restaurant, and a hanging garden of greenery behind the concierge adds to the “outdoor” effect.

The walls in the rooms have mirrored panels to reflect ambient light and Mediterranean flora, and the greenery also reflects on the glossy surfaces of ceilings in public areas, an effect planned to pull them deeply into the interior, fill it with the exterior and intensify the surrounding plants.

The park is described as being among the most beautiful landscapes of western Istria. In 1890 the Trieste entrepreneur Georg Hütterott (1852-1910) bought plots in the picturesque bay Lone, and on Montravo and Punta Corrente capes, thus starting the slow transformation into a beautiful forest park, rich in botanical species, and with many tree-lined paths, promenades, trails and meadows. Pine trees, cypresses and laurel trees are the most common types there and many exotic plants (such as the Lebanese cedar, Douglas fir, Ginkgo biloba, eucalyptus, etc.) were given to Hütterott as a gift or were brought by him from his travels.

Years of care, even after his death, have transformed this area into a rich natural arboretum. It was designated a protected area in 1948 and a forest park in 1961, and still has that status today. Maistra’s blue, blue swimming pools transform the area further and the pebbly beach of Lone Bay is merely a pebble’s throw away. The water – the alluring Adriatic – is crystal-clear and the attractive classic Mediterranean town is just 15 minutes’ walk away. All in all, welcome to wonderland, Mr. Osterberg, and one and all. 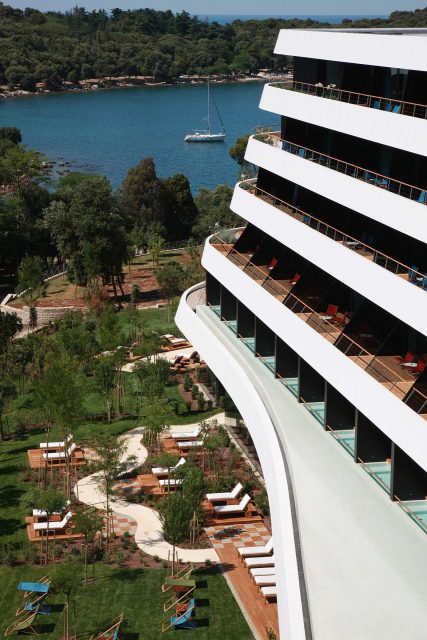