Vukovar, home to the Golden Apple and Vucedol Dove

Written by Alexander Stemp
The Budapest Times joined the delegation of the World Federation of Travel Journalists and Writers (FIJET) when it revisited Vukovar, a small town by the River Duna in eastern Croatia, this month for a ceremony on Vukovar Day, which is every May 3, to re-present the "Golden Apple" award that had been given to the town in 2011 for excelling journalism and for promoting local tourism.

Since then, when FIJET leaders Tijani Haddad and Tina Cubrilo first presented the award to Vukovar and the nearby town of Ilok for concise research into local Vucedol culture, the trophy had been kept at the City Mayor’s Office. But it was finally decided to relocate the memento to the new Museum of Vucedol Culture nearby. The museum will promote this distinct local culture and heritage globally, which is also FIJET’s task.

The original dove was made of clay in prehistoric times and is displayed in the museum. Many more representations have followed since then. What distinguishes this particular award is that a close look at the slightly transparent figure of the symbolic dove reveals an apple feature inside.

“The Golden Apple” is the FIJET equivalent of the Oscar and was established in 1970. This award for excellence is presented each year to an organisation, country, city or person in recognition of outstanding efforts in promoting general tourism. In 2022, it was the duty of former mayor Zeljko Sabo to transfer the “Golden Apple” trophy and exhibit it at the museum, for all to see.

The trophy took the spotlight this Vukovar Day when it was carried from the mayor’s office to a horse-drawn carriage with a police escort. There was a festive atmosphere as well-wishers on the streets cheered along the procession as it made its way through Vukovar on the five-kilometre journey to the museum. Former mayor Sabo, a reinsman at the reins and two passengers (myself included) were carted to the awaiting committee, including today’s mayor, Ivan Penava. On arrival, Mirela Hutinec, the Museum Director, received the statue from Mayor Penava, and then all went inside to toast this auspicious occasion.

The Museum of Vucedol Culture is a specialist institution filled with local historical and cultural antiquities. Some of these earthy objects date more than 5000 years. See the website https://vucedol.hr/en/vucedol-culture-museum

The FIJET delegation was Tina Cubrilo, Abi Shalabi, Marijana Rebic, Mira Shalabi, Ludmila Novacka and myself, and we were.proud to take part in this Vukovar Day celebration. We were hosted from May 1-3 by Mayor Penava and former mayor Sabo, who is now President of the City Council. It was also an occasion to thank sculptor Josip Fluksi and Professor and Archaeologist Aleksandar Durman who created the trophy, which comes with the FIJET logo and inscription. 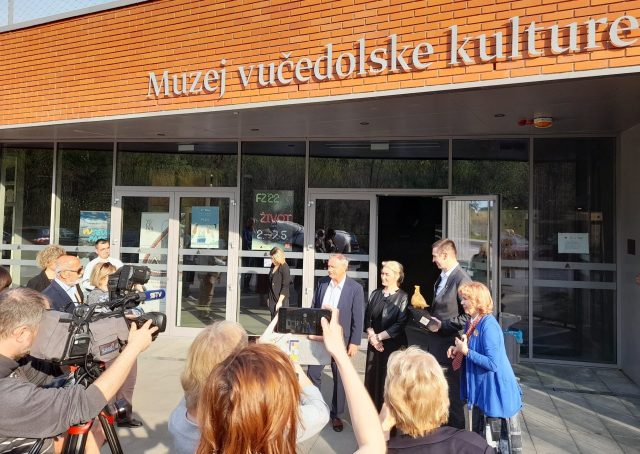 A convention at the Hrvatski Dom theatre and conference room was opened by Zeljko Sabo and heard a speech by Mayor Penava. Various political figures were present and the event was rounded off by Croatian President Zoran Milanović. The conference highlighted recent time progress in Vukovar since the war of 1991-95, the turn of the millennium and Croatia joining the European Union in 2013.

A visit was made to the main cemetery to pay tribute to fallen war veterans, and there was a Mass at the St Philip and St James Catholic Church.
The whole event was a fitting occasion for me to introduce myself to the Vukovar authorities and to hope to cooperate with them with goodwill in the future. FIJET thanked Mayor Penava and his administrative team for their hospitality.

Finally, it is worth noting that Croatia is proud of Vukovar. Croatians say, “’We may be a small country but we are proud of our identity and have an ancient, unique and traditional culture”. And it is not all just about looking back, with Vukovarians adding: “History of Vukovar or History in Vukovar? No, it’s not just about that, we want a future too.”

Also “Splendour overcomes tragedy at Vukovar” on The Budapest Times