Wish you were here

Taking it easy with Socialist idyll in the 14th District

Written by Alexander Stemp
With the general flow of Zugló commuters and 24/7 traffic leading to and from the city, this is assuredly modern-day life at District XIV’s very prim and ordinary Erzsébet Királyné utca. But for a brief moment when passing by the fence of the street’s number 10 this is not so – it's a jump back in time as an unexpected and far less hurried bygone-esque individual is more than sure to catch your eye.

Among the smallish abundances of drab mid-20th-century residential blocks overlooking the grounds of this immediate area, and relaxing in number 10’s garden, is a nameless lady looking outwards in contradiction to the passer-byers, as if to say “What’s the rush?”

Well… for anyone to be so privileged as this concrete lady, built sometime between 1958 and 1960 and who still spends her time watching the world go by, is a luxury for some. So why can’t we all be as fortunate and aspire to her ideals? Perhaps we should also abandon capitalism and our livelihoods and join her in paradise instead?

But on the other hand, whoever this spectre is, most likely in her reposal position she is a representation of a working lady taking a break from the domestic chores and taking in the sun. Even so, she is a long way off from either being as enticing as Boadicea. Or as alluring as the Copenhagen Mermaid, as well as to any form of artistic and bourgeois endeavour. 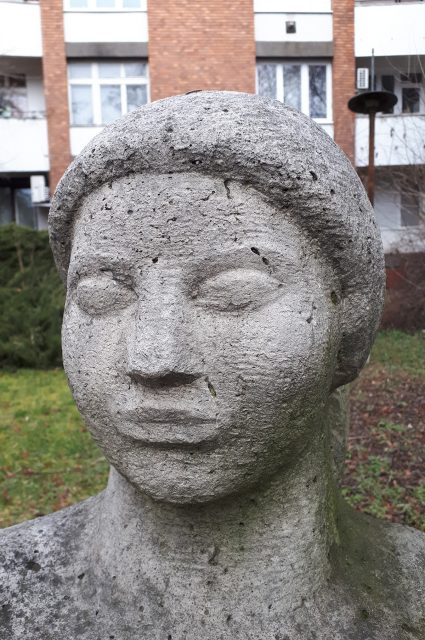 Not that it matters too much as she finally comes across as being a modest housewife type we can all eventually relate to and rely on. But regardless of ethics, why is this dated symbol still here? It seems that this oddball token from former times would be far better off in the local museum instead.

But on second thoughts, maybe for her long-awaited retirement, as it’s been such a hard life being a figure of importance to the local community. She would be better off, and more relevant, looking out to the Lake Balaton shoreline, rather than continually residing here. As this still imposing memento is a distinct contrast to all else nowadays.

Clearly from early on she must have been dutifully modelled, regardless of style, to resemble the common, everyday person at the height of communism. Aesthetically she fits in very well with the immediate surroundings at number 10, which are equally minimalistic and dull. But regardless of impressions, this weathered antique, no longer with political powers or insignia, is still likely to be considered an intrusion by some. But for most others she is generally ignored, and in particular by the post-1989 generations.

Meanwhile, this retro relic still must mean something to someone at this locale. And with nothing more to go on other than what’s mere face value only, this conclusion is over. Therefore, for now she stays, and will remain as a matter of great debate and curiosity value for years to come. And no doubt I will see her in passing again.