Searching for the original Dracula

Written by Alexander Stemp
Should you be in Romania and have an interest in Dracula but wish to avoid the tourism boom of Transylvania with its overly spooky Castle Bran and the flutter of its obvious vampire clichés, especially when at the souvenir shops, there is an alternative where you can find some remnants of an original born out of Bram Stoker’s dark Gothic novel of 1897.

“Dracula” the book became “Dracula” the 1931 Hollywood film with the evil one played to perfection by Hungarian Béla Lugosi (1882-1956), the creation becoming a worldwide phenomenon that delivered him to stardom. But while Transylvania and the castle intertwine with the modern-day enterprise, this cinema spectre can be traced to the sleepy and remote town of Lugoj, or Lugos in Hungarian, in the sweeping Banat flatlands. It is where Lugosi was born.

Lugoj is just east of Timisoara and thus about half-way between Budapest and the more enticing, hilly and bat-flying wilderness further on by Brașov, or Brassó to Hungarians. After the success of the film, it was the temperamental Dracula who took most of the spotlight and theoretically left a bewildered Lugosi behind. Despite this unforeseen mishap, it still has to be said that it was he who ultimately established the vampire and his distinguished identity, which still plays out in cinematic chronicles and many other fictional imitations today.

While working on my Budapest Times article “From Hungary to Hollywood, Dracula still lives on” two years ago, discovery of the Lugoj connection came as a surprise and I felt compelled to visit to find out more about the man who played the devilish Transylvanian nobleman. Research was needed and finally I made my way to this unlikely pilgrimage site. 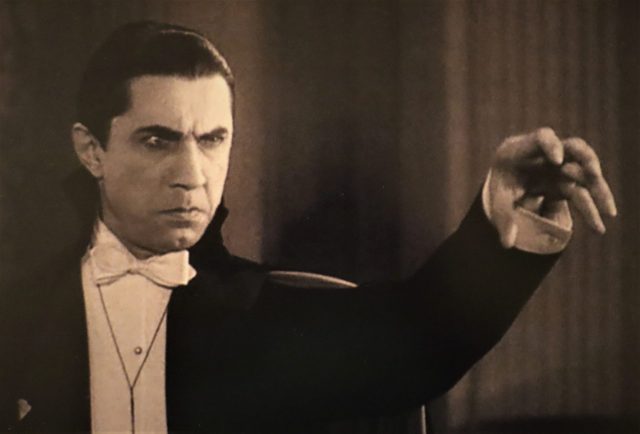 With little to go on beforehand, I was riddled with uncertainties while en route as I wondered again and again whether this venture would prove to be worthwhile. But regardless of outcome my first move was to visit the town’s central History, Ethnography and Fine Arts Museum. Fortunately, my entrée there was not in vain, as I met Cristian who not only works at this commendable locale but is also a fellow Lugosi enthusiast.

I got to see an exclusive original photograph of Lugosi’s former house, which was at the Strada Bucegi main through road. With further luck I was taken directly there. The spot is easy to find, as this dwelling was next to the prominent Parohia Roman Catholic Church and near the newish Béla Lugosi cinema at the Strada Alexandru Mocioni road.

The former house itself, which was originally green, is clearly no longer the same. The original was demolished in relatively recent times and rebuilt into what today has a different facade. But at least this abode comes with a fitting plaque in tribute to the town’s cinematic celebrity. Beyond taking a look at this immediate area there was nothing more to go on, other than to make my own photographic findings.

It was also finally clear: no further museum archives and general periodicals were going to be presented to me. Knowing I was in the best hands with a local expert, but also knowing there was nothing more to work on, I took my leave. Although all was far too tokenish, I was glad to have walked briefly in Lugosi’s footsteps and grateful for what I did see.

Even so, the local authorities could deliver more spectacularly. My host and I both agreed that Lugosi is a real asset to the town, and greater tributes to this remarkable actor could be made with a statue and a museum, to say the least. This would bring in new-found local interest as well as promising tourism for sure. In addition, the town itself is attractive enough with assortments of olde-worlde-style buildings and there are some hotels to make a pleasant weekend away.

Finally, as I have now reached a grinding halt with all-things-Drac, I concluded that if this quest is to continue, my next move would have to be to go to California, where Lugosi, beyond the success of his prized film, lived out the rest of his life in Los Angeles and never returned home.

It would have to be there and only there that I could perhaps round off this intriguing mission and finally get to know more about the mysterious man behind the cape. It is good to know that Lugosi is deservedly immortalised with a star at the Hollywood Walk of Fame.

Until then, to get to Lugoj/Lugos, which is 350 kilometres from Budapest, take the M5 road, turn off near Szeged at the M43 and proceed to the Nadlac border. From there across the expansive agricultural flatlands, follow the A1 road that orbits conveniently around Arad. All then leads to an A6 turn-off, close to Lugoj itself, which will take you directly there.

There are also trains. A direct daytime train from the Hungarian capital leaves once a day en route to Bucharest through Arad. Otherwise travel there overnight and change at Arad until completion and return late the next day. As for me, I hope one day to return, but only when this town has more to offer.