Scenic delights but slow-going on a pre-motorway trip

Written by Christopher Osterberg
Europe can still sometimes offer unforgettable drives, if you can get away from the solid lines of trucks, spaghetti junctions, roadworks, accidents, toll booths and vignettes, radar traps, potholes, lunatic overtakers and other hazards. One such spectacular route is the Jadranska Magistrala, the scenic main road along the Croatian coast, some 650 kilometres almost all a two-lane, undivided carriageway but with scarcely a boring stretch.

Running from Rijeka on the Kvarner Gulf to Karasovići on the border with Montenegro, the Jadranska Magistrala, or Adriatic Highway, offers one heck of a journey, whether weaving its way round deeply indented bays or skirting scree-covered mountains. The Magistrala may frequently set stomachs a-churn with its endless twists and turns, but the views are fabulous, with the Adriatic’s famously stark islands parading in stately procession before your eyes.

Travelling along the Magistrala (literally “main road”, although the Croatian original sounds much more romantic) used to be a severe test of holiday-season nerves, with its columns of caravans, straggling towns with speed restrictions and enough blind corners to make overtaking a near impossibility. With Croatia’s still-growing tolled motorway network now taking the pressure off much of the route, however, not to mention ongoing viruses, it has been re-discovering its reputation as one of Europe’s greatest coastal odysseys.

Engineers in the former Yugoslavia designed the Magistrala well before gigantic machines bore holes through hills and mountains. Winding its tortuous way along the heavily indented, mountain-fringed shore, the narrow highway has astounding views, complex history and – not to be forgotten – an outstanding range of food to be eaten along the way. However, it is the coast itself that provides most in terms of sheer wonder, with stark grey-brown mountains overlooking the verdant littoral strip and its scattering of islands. Some of these latter are lush and green, others are as otherworldly as moon rocks dropped randomly in the sea.

In the olden days travellers could undertake this journey via a costal ferry that ran from Rijeka to Dubrovnik, stopping off at all ports in between. Sadly, this service is not currently in operation; the Magistrala, however, offers its driveable, stunning alternative.

It wasn’t until the 1960s that a modern asphalt road serving the whole coast came into being. Before then, drivers had to contend with gravel roads and clouds of dust, or simply take the ferry instead. Indeed, it wasn’t until the completion of the Magistrala that tourism in the southern parts of Dalmatia could fully blossom. The road quickly became so busy that it was a by-word for bad traffic, with columns of vehicles winding their way laboriously along a lovely shore that drivers were too bad-tempered to enjoy.

In recent years the pressure has been taken off the coastal route with the extension of the Croatian motorway network – it is faster to get to Dubrovnik by zooming down the highway slightly inland rather than following the long and winding road that is the Magistrala. No longer the Adriatic’s main traffic artery, the Magistrala has gone back to being a great ride, an exhilarating experience to savour rather than rushing, foot pressed on the pedal.

And spectacular it certainly is, one of the most dramatic road trips in Europe, and rarely failing to take your breath away, however many times you might have done it. The fact that you will be passing many of the Adriatic’s most popular holiday resorts ensures that there is plenty of accommodation along the way. A profusion of shoreline campsites, especially in some of the smaller places, is an important part of the charm. 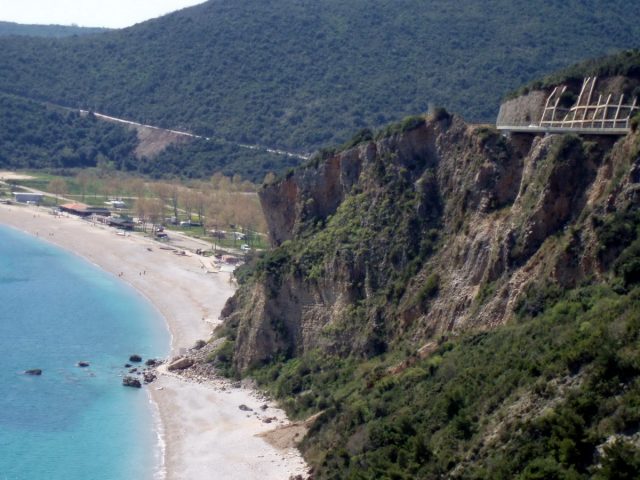 Things get interesting as soon as you leave Rijeka, curving your way around deep sea inlets before winding along the foot of the mountains that hover above the coast. Winding along below mountains becomes something of a leitmotif for the whole trip. Progress is never going to be quick on a road like this. Get stuck behind a truck or a caravan and you could be waiting quite a long time before you get to a stretch of road suitable for overtaking. Providing you take it easy and enjoy the views, however, this is not a journey to tire of in a hurry.

Excitement arrives after the cute port of Senj, with the rocky heights of the Velebit range glowering over the coast, and the road zipping its way between outcrops and ravines. Over on the seaward side of the road can be seen the bare ochre flanks of the islands of Krk, then Pag. Once densely forested, these islands were denuded of trees in order to feed the shipyards of Venice, hence their stark beauty today.

One hundred and ten kilometres south of Rijeka a side road descends from the Magistrala to the port of Jablanac, starting point for the ferry to the island of Rab. Many people jump aboard ship here without realising that one of the highlights of the Adriatic lies a short walk around the headland. A deep inlet squeezed between walls of dazzling white rock, Zavratnica Cove possesses the kind of stop-you-in-your-tracks beauty that will remain in the memory. 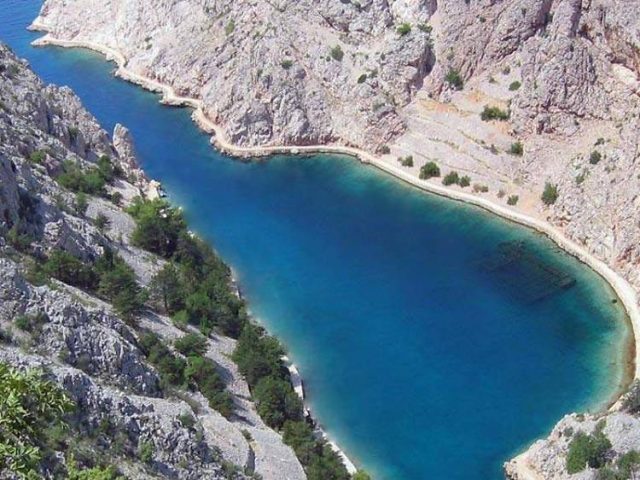 By the time you get to Zadar, with its multi-layered Roman, medieval Croatian and Venetian heritage, you begin to appreciate that the Magistrala offers an educative voyage through the centuries as well as a mosaic of maritime landscapes. Also home to innovative sound-and-light installations such as the Sea Organ and the Greeting to the Sun, Zadar offers a crash course in where the Croatian Adriatic is going in the future as well as where it has been in the past.

Take a north-bound turn at Šibenik, with its Renaissance cathedral and Venetian fortresses, and you’ll soon end up at Skradin, inlet-hugging entrance point to the Krka National Park. Skradin is a lovely little town in its own right, with a yacht-crowded harbour and an impressive handful of regional-cuisine restaurants.

The history lesson goes on: the Roman city of Salona at Solin; and Split, home to Roman-Emperor Diocletian’s Palace. South of Split, the road passes beneath the intimidating grey crags of the Biokovo range, another imposing mountain ridge that stretches for several kilometres along the coast. Set below Biokovo’s western shoulder is Omiš, home to famously fine shingle beaches and starting point for boat trips up the Cetina river, a lush reedy wonderland flanked by tortured rocks. South of Omiš, the road runs along the famed pebble beaches of the Makarska Riviera, any one of which would serve as a quick-dip journey-breaker. Once beyond here, the Magistrala crosses the Neretva delta, whose bright green patchwork of fruit orchards and irrigation canals comes as something of a shock after all those stark coastal mountains.

It would be a shame to speed through Dalmatia without sampling the local idea of road-trip food. Roadside restaurants roast lambs over spits, hawkers sell cheeses and honeys, and in the Neretva delta region, stalls sell the mandarins for which the region is famed.

Many travellers will end their journey at Dubrovnik, the perfectly proportioned Medieval-Baroque city encased within stout sea-splashed walls. However, there are abundant reasons to carry on southeastwards towards the Montenegrin border, with the Magistrala carving its way across an inland plain characterised by stone-built villages and fertile green fields.

South of the Dubrovnik Riviera the road heads inland towards the border crossing with Montenegro. For a true end-of-the-Croatian-coast experience you should detour south to Prevlaka, a stony stub of land jutting southwards into the (largely Montenegrin) Bay of Kotor. Formerly the site of a highly secretive Yugoslav Army base, it is now well on the way to becoming a tourist attraction.

You can either hire a bike or travel with a golf-cart-style tourist train past derelict barracks, finishing up at the echoing stone barrel of an Austrian sea fort at the end of the peninsula. The scrub-covered landscape has a desolately eerie quality, and the views towards Montenegro are splendid.

For a final breather consider a side-trip to the seaside village of Molunat, home to a brace of fine pebble beaches and wonderful views of the open sea. Lulled by the sight of crystal-clear waters and the sound of crickets in the trees, it’s the perfect place to reflect on just how far you have come.

Travel after the pandemic #16: Istanbul, Turkey

Travel after the pandemic #18: Salzburg, Austria

Travel after the pandemic #19: Chernobyl, Ukraine

Travel after the pandemic #21: around the world

Travel after the pandemic #22: Norway