Written by BT
Vienna’s Sigmund Freud Museum reopened on August 29, 2020 following a rebuild (which took longer than planned due to COVID-19) in which it was renovated, expanded and made wheelchair accessible. Sigmund Freud and his family lived at this historic address, Berggasse 19, which was also the site of his practice, for 47 years until they were forced to flee from the National Socialist regime in 1938.

New exhibitions offer comprehensive information on the life and work of Freud. The multifaceted concept of architects Hermann Czech, Walter Angonese and ARTEC Architects has preserved traces of history and combined them with state-of-the-art museum standards. For the first time ever, all private rooms of the Freud family will be accessible including his “first” practice located on the upper ground floor.

This bel étage area is entirely dedicated to research. It houses Europe’s largest library of psychoanalysis as well as the museum archive, which is equipped with a new reading and lecture room. The modernised museum infrastructure provides up-to-date facilities that include a ticket counter, museum shop and café in the newly designed foyer.

The exhibition area, which now totals about 550 square metres, has nearly doubled during the course of the renovation. For the first time ever, it now includes all rooms in which Freud and his family lived and worked.

The entire mezzanine floor, the private family apartment and the practices of Sigmund and Anna Freud are the sites of comprehensive exhibitions that provide a wide range of information from the historical developments of psychoanalysis to critical perspectives on its contemporary issues. These are in the centre of the special exhibition “Analysis Interminable. Psychoanalytical Schools of Thought after Freud”.

The history of the building and its inhabitants is presented in a newly constructed stairwell that unites all museum levels and enables visitors to tour all exhibition rooms.

The rooms on the upper ground floor that used to make up Freud’s practice now display art: the collection of conceptual art, which was established by Joseph Kosuth, includes works by, among others, John Baldessari, Pier Paolo Calzolari, Susan Hiller, Ilya Kabakov, and Franz West, and they are exhibited where Freud once wrote the “Interpretation of Dreams”.

A new installation by American artist Robert Longo is on display in the Showroom Berggasse 19, a storefront exhibition space in what used to be the butcher shop Kornmehl. Longo’s installation envisages new associations between the disciplines of art and psychoanalysis. 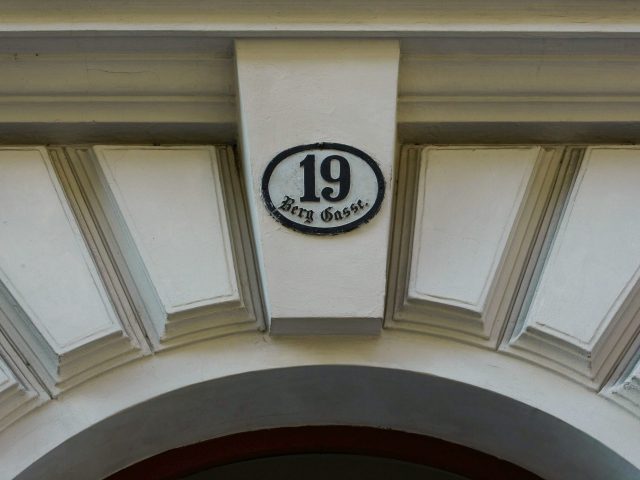 The ticket counter and museum shop are located in the new foyer on the ground floor, and, together with the new wardrobe system, provide an infrastructure for a frequency of over 110,000 visitors per year. By separating the commercial museum activities from the historical rooms, the atmosphere of the former family apartment and practice can be experienced without any distractions.

The new café in the foyer provides space to relax and enjoy a culinary finish to the museum visit. The café and shop may be visited independently of the museum, and are thus available to walk-in customers.

Berggasse 19 – a commemoration site: On the one hand, this world-famous address is the “birthplace of psychoanalysis” where Freud studied the human psyche and the unconscious, and in doing so gave people a new way of looking at themselves that has left its mark on science, culture, and society to this day.

On the other hand, the location functions as a site of commemoration and memorial to the loss of culture and humanity under the National Socialist terror regime: because of the historical responsibility of Austria and Vienna, Berggasse 19 serves as a commemoration site and memorial to all displaced and murdered Jewish Austrians.

The renovation and restoration project, which cost around EUR 4 million, was financed by the city of Vienna, the federal government, private donors and the Sigmund Freud Foundation, which also operates the museum.

If we consider the rooms of Berggasse 19 as exhibits by their very nature that centre on their former functions and significances, they are given another layer of information by the presentation curated by Monika Pessler (director) and Daniela Finzi (research director) on the life and work of Sigmund Freud located on the mezzanine level of the building.

According to Monika Pessler in summarising the basic conceptual idea behind the new museum presentation, “The architecture of this Gründerzeit building not only defined the redesign with regard to space, it also correlates with the significance of subject matter.”

This layer of information is in many ways closely connected to the history of each respective room: the practice of psychoanalysis and the so-called “talking cure” is addressed with the help of case histories and texts in Freud’s former treatment room. Doing so refers to the former use of the room and brings it into the present.

In this vein, the spot where the psychoanalytical couch once stood remains empty. Monika Pessler explains why the museum deliberately avoided reconstructing the original room: “This void, which has existed in Freud’s treatment room since his flight from the National Socialist regime, clearly represents the dark side of history. To reconstruct a ‘world of yesterday’ (Stefan Zweig) within these rooms — i.e. a world before the March 1938 Anschluss (annexation of Austria into Nazi Germany), as if Freud’s forced exile in London never happened — would be to negate a significant part of Freud’s history and, in doing so, negate ours.”

Anna Freud’s adjacent living and practice rooms are dedicated to her work of combining psychoanalysis and pedagogy, which she performed together with her partner Dorothy Burlingham in Vienna and, after their emigration, in London. Several personal artifacts on display have been loaned from the Freud Museum London including Anna Freud’s laterna magica (magic lantern).

Following the exhibition concept, the private rooms of the Freud family are dedicated to Freud’s life as a family father and his career path as a young physician and neurologist. Objects such as hospital documents and medicinal instruments, as well as travel toiletry kits, gifts to his future wife Martha, and other personal objects provide the viewer with information on Freud’s family life, and according to Daniela Finzi, “set into motion imaginations, associations, and narratives.”

Texts and manuscripts from the estate of the Freud family will be presented to the public for the first time in these rooms. Freud’s former bedroom is dedicated to the topic of “The

Interpretation of Dreams” — listening stations furthermore provide an auditory experience of Sigmund Freud’s dreams. Original pieces of furniture have found their way into the exhibition for the first time including a dresser on permanent loan from the Freud Museum London which, along with its accompanying intarsia table, makes up part of the original, historical ensemble of the Herrenzimmer (gentlemen’s salon).

The History of the building and its inhabitants

The newly built stairwell is where visitors experience the history of the building that began in 1889/90 when it was constructed according to the plans of architect Hermann Stierlin on the site of the former home of Victor Adler, the founder of the Social Democatic Worker’s Party.

The darker history of the building is also addressed in the exhibition: After Freud fled, Judensammelwohnungen (collection apartments) were established at Berggasse 19 in which a total of 79 people were forced to await their final deportation to extermination camps.

The fate of Freud’s sisters Rosa, Marie, Pauline and Adolfine, who were murdered in National Socialist concentration camps, is told in a separate section of the exhibition located on the museum foyer gallery level

Psychoanalysis and Art: Hidden Thoughts of a Visual Nature

As ever, the historical stairwell, which is an integral part of the new museum concept, connects the living spaces on the mezzanine level with the “doctor’s apartment” (1896-1908) on the upper ground floor where a permanent exhibition entitled “Hidden Thoughts of a Visual Nature” will be on display: A presentation of selected works from the Sigmund Freud Museum’s collection of conceptual art.

A comprehensive illustrated catalogue containing numerous contributions by international authors will be published by Hatje Cantz on the occasion of the realignment of the collection. 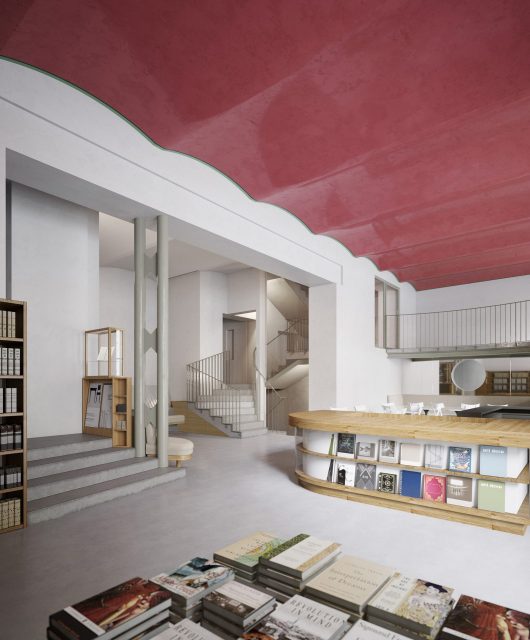 One room of Freud’s former private apartment is dedicated to a rotating program of special exhibitions that address contemporary questions and problems of psychoanalysis and its related fields.

The first special exhibition after the renovation is titled “Analysis Interminable. Psychoanalytic Schools of Thought after Freud” and contains short films and interviews with five practicing psychoanalysts from New York, Dublin, and Berlin who introduce a variety of psychoanalytical schools: contemporary drive and conflict theory, structural psychoanalysis, relational psychoanalysis, object relation theories, as well as self-psychology.

A new installation by American artist Robert Longo is on display in the Showroom Berggasse 19, a storefront exhibition space in what used to be the butcher shop Kornmehl. Longo’s installation envisages new associations between the disciplines of art and psychoanalysis.

Library of Psychoanalysis and Archives

With its collection of approximately 40,000 books and other media, the Sigmund Freud Museum library is Europe’s largest specialised library on psychoanalysis. Formerly located in the Freud family’s private rooms, it is now accessible to users one floor higher, on the bel étage.

The new reading room, equipped with state-of-the-art technology, can be used as a multipurpose lecture hall for in-house or external events. One of the library rooms is dedicated to deceased psychoanalyst Michael Turnheim, and contains books and furniture from his estate.

An additional room can be used as a seminar room. The entire bel étage level of Berggasee 19 is dedicate to research, and together with the Library of Psychoanalysis is also the home to a comprehensive archive as well as workspaces.

Please note: Subject to changes due to the current COVID-19 situation.

On the occasion of the reopening