Pleasures of being, in a green and pleasant land

Written by Alexander Stemp
Neighbouring Slovenia is a diverse, green country and easy to reach via the M7 motorway. The capital, Ljubljana, 450 kilometres from Budapest, also makes a delightful sojourn before heading to the Adriatic coast, the Lake Bled region and elsewhere within the Mediterranean sphere.

At the time of my recent visit this July there were no official Covid checks on either side of the border, but this matter is subject to immediate change at any time. Therefore, take all relevant health cards and documents with you for a free pass unless otherwise stated. Beyond this point of caution, Slovenia is as safe and comfortable as Hungary.

The country’s terrain consists of mountains, hills, plateaux, limestone regions and a small strip of the Adriatic coast. Other European geographical regions also meet in Slovenia, such as the Alps, the Dinarides mountains and the Pannonian Plain. It’s remarkable how green Slovenia is, as 60 per cent of its territory is forested and increasing, much due to the local government and people’s support for environmental issues. So much so, many of these areas have protection orders to allow them to grow and prosper sufficiently without interferences or harm.

Another strong Slovenian characteristic is that the locals are very respectful to bees. One in 20 from the population of just over 2 million are bee-keepers. Others work with bees in related ways too. Plus, the wine industry is very lucrative: one in 70 persons have a vineyard, a winery or perhaps both, and work with this as a livelihood. It’s clear, Slovenia is an environmental example to many. I also noticed that tunnelling is a strong feature when on the motorway and within the outer Ljubljana orbits.

There are some renowned politicians, celebrities and outstanding sports personalities from this region, but probably Slovenia’s most famous modern-day personality has to be Melania Trump, who requires little introduction. She could be followed by Micky Dolenz, an actor and drummer for The Monkees, who also has origins there.

Sunshine-filled Ljubljana is a small, lively city with a population of a quarter million-plus, and easy to orientate around when familiar with the main Cerkev Marijinege Oznanjenja. This alluring 17th-century Franciscan church features a pinkish façade, and inside one can look up at the captivating ceiling frescoes. This main central point is easily found when within the realms of Prešeren Square, where various streets terminate at this immediate circular pedestrian zone and meeting point, known not only for hanging out and socialising but delivering outdoor festivals too. 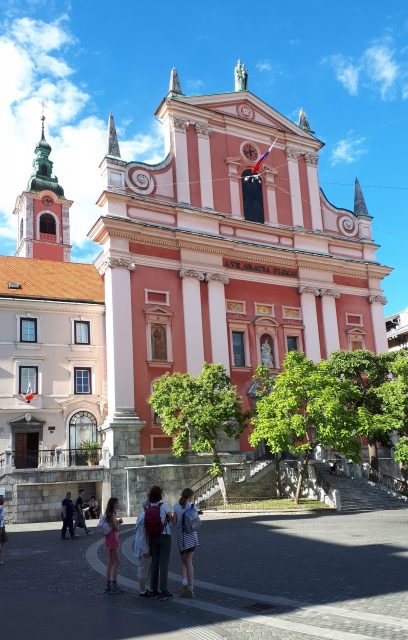 The River Ljubljanica flows through the city centre like a canal. All the immediate area is overlooked by the impressive Ljubljana Castle, which is a medieval fortress and equally easy to find.

There is plenty more at this capital with its Mediterranean-esque atmosphere, which was once part of former Yugoslavia 30 years ago. Ljubljana, a half-day drive from Budapest, makes a delightful stay for either a long weekend or before venturing en-route elsewhere.

But what has to be Slovenia’s crown jewel, and perhaps the country’s most recognised landmark, is the graceful Lake Bled in the Julian Alps. For rapid relief from the heat and dust, concrete and computers, make your way there to the cool and calm of this tranquil region, and really take in the immediate splendour of the forested locale. This region has much to offer with the great-outdoors and guaranteed cooler temperatures than much else I can think of relatively nearby during the summer.

The Lake Bled area itself with the enchanting Bled Island is a green and environmental wonderland in every sense. My family and I made our eventual way, roughly 50 kilometres northwards from Ljubljana for promising ventures in this area, as well as for a promising campsite.

Tourism there is well established and rolls out with all the general amenities, which are comfortably close or as far from the salient main feature as you please. Swimming at this scenic alpine and vacation spot is generally allowed at official strands. But perhaps it’s needless to say, the sheltered Lake Bled area has distinctly cooler conditions than Lake Balaton. And although this immediate area is busy and ongoing, central Lake Bled at this time of the year is significantly less crowded and congested than the Hungarian Rivera. Even so, bathing in the Bled waters is distinctly chillier.

The next task was getting to the picturesque Lake Bled island itself. Traditionally, the most splendid wedding this country has to offer is here and it’s obvious why. Local legend dictates that to ensure a prosperous marriage the groom must carry the bride up the 99 steps that lead from the island shoreline to where the Pilgrimage Church of the Assumption of Mary awaits. An additional ringing of the bells ceremony is held, and when finally done inside, one is granted a wish.

In our case we hired a rowing boat and arrived at Bled Island in about ten minutes, before exploring this picturesque and rocky terra fauna. It’s definitely worth going to the top of the Provost’s House with its 52-metre tower before returning back to base.

Overlooking this immediate area is the fairytale-esque Bled Castle, which provides the best bird’s-eye views. Then it was a simple matter to complete the six-kilometre circle, which is manageable by walking or cycling. This essential introduction to this region is a very light and pleasurable way to start off one’s trail in this area, before proceeding to further lesser known ventures nearby. 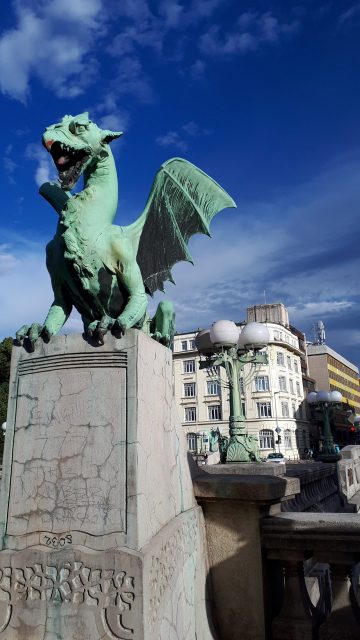 Should this itinerary be too tame and the scenery too sedate, fear not. Beyond this point for the more intrepid travellers there are plenty of livelier sports and outdoor pursuits on offer, such as rafting on the rapids, climbing, ab-sailing and much tougher ventures and work-outs, with high scenery and less crowding.

This area also comes with a golf course as well as various thermal springs, and clearly makes the perfect walking, hiking and sporting holiday destination for all ages and for all levels of ability. For those with real stamina, take to climbing Mount Triglav, Slovenia’s highest mountain at 2864 metres, and which is considered a patriotic duty for every Slovene to accomplish at least once in their lifetime.

Alas, before we knew it our time was up. What was a delightful and very full, but brief, introductory three days were soon over. Knowing there is more to see and do for next time, we made our way to Budapest via Lendava, a small border town, assuringly famous for its wine production, as well as for the Vinarium Tower. On a clear day one can see a 100-kilometre radius from the perimeter of this immediate area. As well as looking upon the general Slovenian scenery, one can also see into Austria, Croatia and Hungary. This made a perfect half-way break between these two capital cities before our inevitable return to all-things-Magyar, which prevailed moments later.

Finally, for one last distinctly green but unexpected twist: I try not to pick up on tourist clichés when on the road. Such as very obvious ones like “The Danube Pearl” and “The Adriatic Pearl”, or words to this effect, which clearly relate to Budapest and Venice. But perhaps it’s a weakness of mine to occasionally dip into them, as they occasionally provide some amusement. And this was finally the case when my family and I went to pearl-less Ljubljana, as this capital came with much surprise as the city of dragons. This was mildly refreshing at first, after being swamped by too many illusive pearls, and so forth, for far too long elsewhere.

The symbolic dragons were not only evident when crossing over the scenic Dragon Bridge, but also with many additional greenish motives that continually sprang up along the way, a bit too much so. Still, I appreciate this city’s inherited mascot. It certainly is a novelty, as anything dragon-related clearly refers to nobility and powerfulness. As well, it makes a playful change to the many highly, overly done flowery tags that many olde-worlde places so often receive and have to endure, perhaps for the sake of maintaining some form of heritage as well as modern-day tourism.

But finally I saw through it all with the alluring greenish creatures, which were as finally obvious as the many pearl-esque puns. As the dragon novelty finally dispelled and burst into over-plus word redundancy. Not that it mattered, as I am charmed by the mythological side of dragons and their peculiar shape in general. And we will return to Dragon City and this splendid region, alongside with its equally symbolic bees, as I would like to find out more about them, with the utmost pleasure. I am looking forward to this quest already.

For this and more about Ljubljana and Slovenia in general, see the official travel guide, I feel Slovenia

For general Covid-19 travel advice in the EU, see consilium.europa.eu