Written by BT
Where once stood two catastrophically ugly buildings – the cheapest of office blocks and a massive rotting concrete factory – now can be found the beautiful Millenáris Széllkapu Park, a green space with a lake, a grove of cherry trees, water spouts and a playground.

Said by officialdom to be one of the largest recreation parks in Central Europe, the park covers 26,000 or 35,000 square metres depending on where you read about it. Beyond dispute is that it is a significant increase to the green space of the capital. 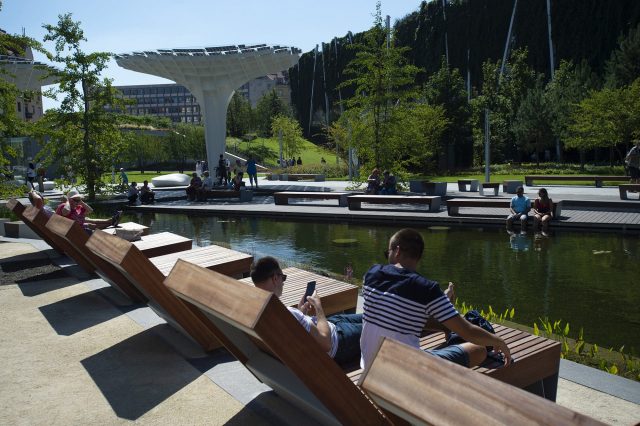 Water plays a central role. The nearly 700-square-metre lake is inhabited by aquatic plants, and the wood-covered pier and the sunbeds and benches placed on the shore serve those who want to relax and unwind. Near the lake there is a water play area equipped with humidifying nozzles. Illuminated with coloured lights, the programmable water jets break out of design concrete slabs with stylised graphics depicting plant and animal species. The spectacular digital water curtain next to the park’s main entrance in Margit körút cools the air in the heat of summer, forms various shapes or letters and words from the falling water drops, and had already been operating for months to the enjoyment of passers-by.The fate of the former Ganz factory at the Millenáris Park had long been a topic of debate, and finally bureaucracy managed to demolish it. The adjacent Millenáris Park was completed in the early 2000s but the smaller part of the former Ganz industrial area – Fény utca/Kis Rókus utca/Margit körút/Mammut 2 shopping centre – remained untouched. For the next decade this was a shame. Here stood the monster of the former Ministry of Industry office building, and behind it were decaying factory buildings and a temporary car park. In 2013 officialdom decided to revitalise the neglected one-hectare site and complete the project by expanding the area and functions of the Millenáris Park.

The new area is an eco-friendly one – not only was Millenáris Széllkapu Park created to provide a relaxing green retreat, its trees and empty space will allow for wind to counteract the traffic fumes of busy Margit körút nearby.

Possibly this good effect could be countered in turn by the underground car park that holds 500 vehicles. The mighty motor car must be accommodated but the new park can boast solar panels as a nod to sustainable energy.

When the sun is out it shines on perhaps the park’s most spectacular feature the three-dimensional hanging garden, a natural green wall set on a 350-tonne steel frame that acts as a relaxation and observation point. It is almost as tall as the adjacent shopping centre.

The hanging garden connects the new part of the park with the “old” Millenáris, and is equipped with panoramic elevators. Between the green plant walls people can not only walk or cool off on hot summer days, the hanging garden can also be a place for cultural and leisure programs and events. On the steel support structure, various types of creepers increase the biologically active green area by an additional 3000 square metres, and in a few years by about 4000 square metres. The design plant walls can be interpreted as a vertical extension of the park.The 355 “pre-grown” trees were planted in and around the park, and size was an important consideration so that they would immediately form a significant green area. For the sake of sustainability, mainly native trees and shrubs were planted that are well tolerant of the urban climate and ecological conditions.By choosing stress-tolerant perennial species, a diverse, biodiversity environment was created on a total of about 17,000 square metres of green space. The 150 ornamental cherry trees will exude a special atmosphere during blossom time, but there are also larger saplings, oaks, pines, apples, birches and hornbeams. In addition, 50,000 perennials, plenty of ornamental grasses, large shrubs and more than 40,000 bulbous plants (tulips, hyacinths, anemones, saffron, pearls, daffodils) colour the park. Grassing was done with lawn carpeting due to the metropolitan climatic conditions.The intended ventilation of the busy Margit körút and the favourable climate and air pollution-reducing effect of the diverse, rich vegetation of Millenáris Széllkapu Park are designed to improve the quality of life of those living in the area and those travelling to it. 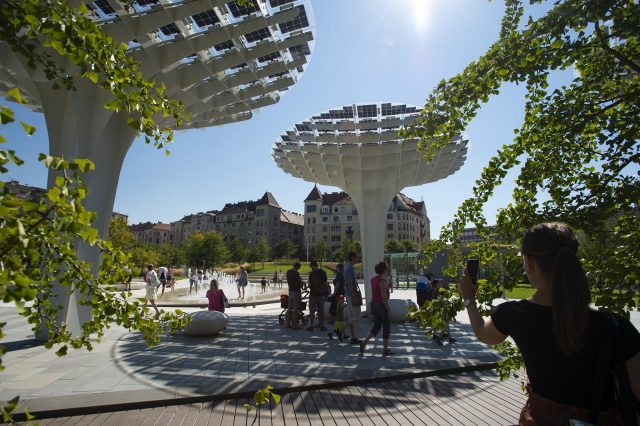 Dogs and other live animals are not allowed in the entire Millenary area. An exception to this is an assisting animal and a card.

The Széllkapu Park, like the Millennium Park, is barrier-free throughout.

There are three bicycle storage rooms.