Still standing out from the crowd with nowhere yet to go

Written by Alexander Stemp
Just when I thought I had seen them all, another surreal oddity comes my way. After last year’s unexpected sighting of a statuette of a hostile gun-waving revolutionary in Újpest, clearly from early communist times, I wasn’t anticipating another such find to stop me in my tracks – until the other day in Kőbánya Kispest.

All of a sudden while passing through this District X neighbourhood, I was set upon by another equally striking and irregular object d ‘art, also associated with 20th-century tyranny. Once again I was not prepared for this glaring object to pursue me on the streets in today’s times. Had I seen both these monuments in a museum, I would have felt far less about them, other than that these redundant relics were certainly now in the correct place.

Although both these occasions are very rare occurrences, to see them and other pre-1989 oddballs still “out there” is another matter, as well as a real jump back in time. But at least this latest one had some merit: its appearance is less menacing than most others.

Constructed in 1977 and simply titled “Munkás”, meaning Worker, by renowned local sculptor and artist Imre Varga, 1923-2019, this five-metre chrome-steel structure of considerable weight is perched on a cobblestone mound. Clearly it represents a symbolic ideal from former times. Even so it is far from glorious, as compared to anything vaguely biblical, mythical or ornamental.

I think this otherworldly spoof would look very good as a stage prop in an early science-fiction film, as such a phantasmagorical “illusion” may have been designed with more artistic endeavour rather than a political one for the local working-class community. Now, after the various 1989 revolutions that brought down almost all these period pieces, and ended that defining era, new generations of passers-by express their regard by generally ignoring this occupant. Even so, this industrious representation is still there and holds “something” from those times, as seen with its imaginary grasp over the steel wires props for all to see, overlooking the pleasant Bánya-tó (Bánya lake) and its immediate park. 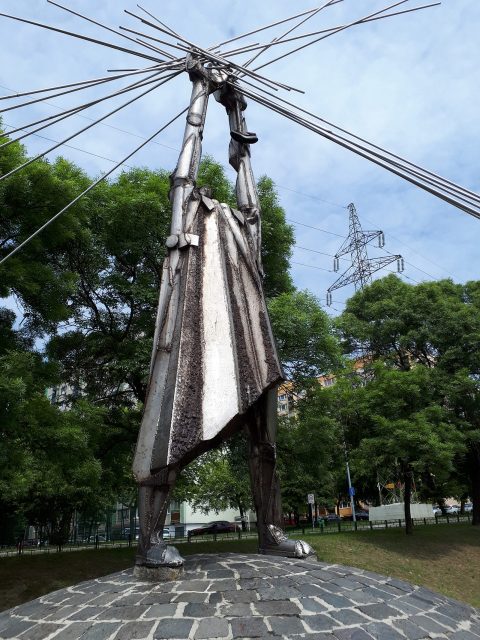 Why this striking make-believe exhibit has not found its way into a history museum is yet to be known. Certainly it would be safer there and serve a more symbolic purpose. There would also be less chance of it collecting another overhanging sneaker, a dangling impediment that I assume someone either directly threw at it or was purposely placed by a climber to add contrast and parody to the object.

Any disrespect to such monuments during their time would have been a strong, punishable offence. But as this occurrence with the sneaker clearly happened recently, this can probably be seen as an act of defiance, hence with some aptness the obtrusive shoe stays. Directly behind are the tower blocks, the real electricity pylons and overhanging live wires which clearly serve, more so, the people and this immediate area today without any additional fanfare.

Although Imre Varga’s works are perhaps more challenging rather than appealing, the good news is that they are not always political or “brassy”. Some are admirable and patriotic, such as the statue of the martyred Imre Nagy, who was once looking with hopeful endeavour at the Országház, the Parliament building at Kossuth Lajos tér, but was moved in 2018 by the authorities to the less obvious Jaszai Mari tér.

Other of Varga’s works, also found in public places, carry much lighter “everyday people” themes with no contentions. A very famous one is the far more alluring “Tree of Life” at the captivating Dohány Street Synagogue. Then there is the very harsh and repressive Bela Kun exhibit found at the Statue Park.

For these and more about this artist, visit the Varga Imre museum in Óbuda, as seen here: http://www.museum.hu/budapest/vargaimre

For an intriguing day out at the “Munkás” it’s a short 85 or 117 bus, or bike, ride from the main Kőbánya Kispest terminal to the Kőbányai Bánya-tó lake. Step off at the Mélytó utca bus stop, from where it’s a clear line of sight how to proceed.