Written by Christopher Osterberg
It is a decade now since a group of Viennese architects hatched a plan in 2011 for a different kind of tourist accommodation. Empty commercial premises in areas off the well-trodden track but still fairly central would be converted for guests who could then consider themselves temporary residents of the district. These visitors passing through for a while would stay next door to the real Viennese and hopefully meet some of the locals, shop where the locals shop and generally acquire some familiarity with and perhaps share in the neighbourhood life before they moved on. The idea must be working out so far, with the initial three properties in the Austrian capital followed by expansion to Linz, the country’s third-largest city.

The architects founded the Austrian company URBANAUTS Hospitality GmbH to carry out their concept. From 2012, those first three properties were called grätzl hotels, a name that came about to reflect the fact that cities have their individual neighbourhoods and quarters, where relatively small and self-contained communities exist within the larger urban area. Berlin has its “kiez”, Barcelona has its “barrio” and Vienna has its “grätzl”.

The three are Grätzl Meidlinger Market, Grätzl Belvedere and Grätzl Karmelitermarkt. Over the years The Budapest Times has stayed at five splendid hotels on Vienna’s famed Ringstrasse, but then we tried out Grätzl Karmelitermarkt and subsequently found ourselves ensconsed in the city’s second district, Leopoldstadt.

Here, it was indeed possible to appreciate URBANAUTS’ notion of being in a real neighbourhood where the residents visit the market for their food and flowers, pick up the kids from school, go to the park, walk their pets, have a coffee and check their phone, all the while hopefully stopping for a chat and getting to know one another. Plus, Leopoldstadt is less than a kilometre from the Donaukanal (Danube Canal), on the other side of which immediately begins the tourist-magnet Innere Stadt, the Old Town bounded on three sides by the Ringstrasse.

The grätzls are deliberately located on the ground floor in what used to be old shops and workshops or storage areas. These once housed tradespeople – professionals such as tailors, lamp-shade makers, blacksmiths, bakers, electricians, tobacconists, gallery owners and the like – who had moved out to perhaps more industrial areas or cheaper, smaller premises.

The new accommodations were thoughtfully designed to reflect these former occupations and were named accordingly: our suite was called “der hausmeister” (the caretaker), and the others at Gratzl Karmelitermarkt are “der vogelfänger” (the bird catcher), “die gärtnerin” (the gardener), “der laternenanzünder” (the lantern lighter), “der elektriker” (the electrician), “die knopfmacherin” (the button maker) and “die lampenschirmmacherin” (the lampshade maker). 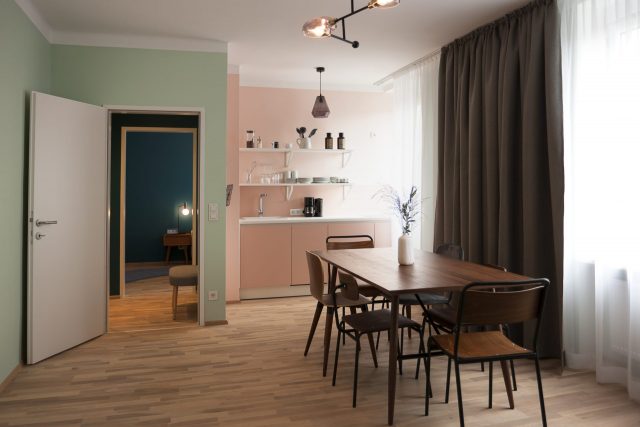 In October 2017, URBANAUTS developed a second concept, the étagèrie, and this introduced a new apartment product, again in a location beyond the typical tourist routes but still reasonably close-to-centre, and this time transforming apartments in a building from the 1950s and in true back-to-1950s style. And these are not just on the ground floor. “Étage” is the French for “storey”, or “floor”, thus étagèrie is a play on words to reflect that these apartments are on different levels, unlike the ground-floor grätzls.

The concept was taken to Linz, where the location is just a 15-minute walk from the huge main square, the Hauptplatz, with its towering Holy Trinity column, following the side of the Danube to a large apartment complex containing some 250 flats. This was built in 1952 to house workers at the neighbouring tobacco factory. The factory has gone now and its building put to new use, but the flats remain, and URBANAUTS has converted 33 of them. They are 45, 65 or 75 square metres.

Unlike in the grätzls, with their dutiful nod to the previous occupants and their trades, the étagèrie, as mentioned, are designed in 1950s style. Two days before arrival, the visitor is sent an email with a pincode for the key safe at the courtyard entrance. In our case, the apartment is on the fourth floor. It offers basic necessities for comfortable living and is not overloaded with décor; minimalist and not fancy.

The walls are mostly pastel colours but muted so as not to overwhelm. The rugs and small tables are kidney-shaped. The kitchenette has a hotplate, fridge, dishwater, coffee maker and electric jug, and plenty of cups, glasses, pots, plates, cutlery and the rest. The living room has a lounge but the TV is in the bedroom. The shower and toilet are separate. There are a few Austrian/German books, one with photos of 1950s Linz. There is an iron and ironing board. Having been in use for just a couple of years, nothing is over-worn.

The courtyard is a large grassed area with garden furniture for outdoor meals, underneath which is a parking area.

Exploring the living and breathing neighbourhood, as URBANAUTS wishes us to do, visitors will find the former tobacco factory (fondly called “Tschickbude”, or “ciggy hut”, by the locals), now transformed into the Tabakfabrik for start-up companies and such events as exhibitions and design fairs. It is protected as a historic monument.

Right opposite the étagèrie and alongside the river is the Brucknerhaus in Donaupark, a landmark of Linz offering top-class modern and classical music. Austrian composer and organist Anton Bruckner was born in Ansfelden, then a village, now a suburb of Linz, on 4 September 1824 and died on 11 October 1896. He is a famous son of the city.

This area is the Linzer Kunstmeile (art mile of Linz), and between the Nibelungen Bridge and Brucknerhaus is the Lentos Art Museum, 130 metres long and one of the most important museums of modern art in Austria. At night its transparent glass casing is attractively lit to glow blue. Its restaurant sits next to the river.

In a nearby backstreet is the Musikschule der Stadt Linz, where the passerby can hear the sounds of pupils practising their singing or scraping on violins. For athletic types, the Fitnessoase Parkbad swimming complex is also close, with indoor and outdoor pools and ice-skating. 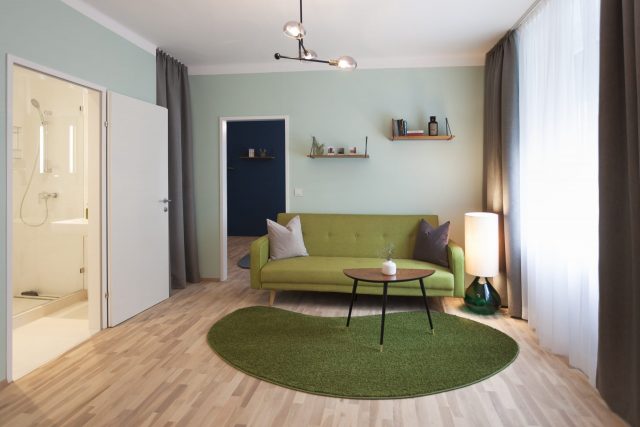 And then there is the open-air gallery Mural Harbour, where well over a hundred examples of street art, or graffiti, some of them of monumental size, decorate the facades of the old industrial constructions and offices at the harbour of Linz. Artists from some 50 nations transformed the huge warehouses, containers, cranes and railways of the unsightly docklands into an art hotspot.

Another discovery for the flaneur is Villa Ostende, a nightclub with an eye-catching amount of red lighting outside. Inside, a young woman in her underwear says she is on duty from 6pm to 8pm, when another five “girls” will arrive. “You can see one of us for EUR 75 for 30 minutes and EUR 120 for an hour,” she informs. Prices may have increased since The Budapest Times popped in.

Living like a local can indeed offer up unexpected opportunities.