A case of lost and found in Csobánka

Little is known but much is revealed

Written by Alexander Stemp
Among the many locales within the Budapest milieu, the village of Csobánka must be one for the odd-ones-out category. Tucked away within the Pilis Mountains, an area that is a national park, and in between Pilisvörösvár and Pomáz, Csobánka is obviously and respectfully Hungarian although with touches of Serbian culture. What’s more, on first impression Csobánka comes with a distinct further-away feel.

Immediately, in full view is the unmissable Oszoly-Csúcs, a 327-metre rocky, forested peak and Csobánka’s main feature, the large, rounded rock and its surrounding area resembling an Austrian alpine setting. At the same time when closer up and walking around, the general ruggedness that Csobánka delivers could be comparable to a Transylvanian atmosphere. The main reason for these observational claims is that such a variable environment is rare in Hungary, except in the hillier and mountainous Bükk, Zemplén and Mátra terrains.

Csobánka includes a Serbian Orthodox church and community but there are few other facts to go on before arrival except what’s on maps. Fortunately, information is finally provided on various noticeboards throughout the place. Much relates to its splendid abundance of walks, rock climbing and various nature trails, and there are also caves in the vicinity. All this and more leads from the main, easy-to-find, central square and makes a rewarding day out. Walk around the serene neighbourhood and do Csobánka your way. 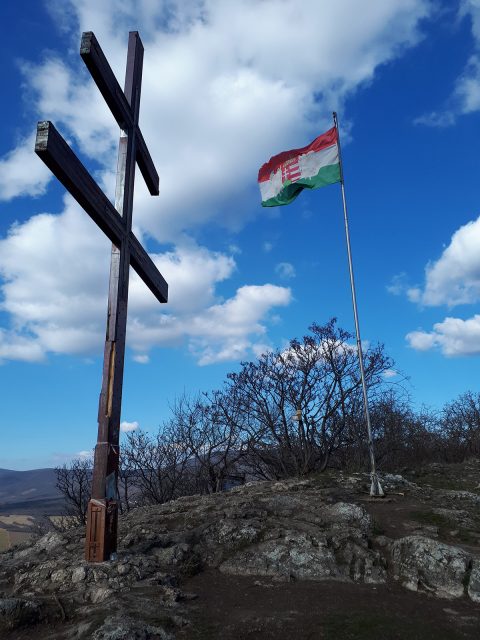 When approaching the stony Oszoly-Csúcs from any direction, providing it’s a clear day with wind one can just about make out the illustrious cross and Hungarian flag on top. One simply has to go there. Half an hour later, the top is reached and the symbols are at hand. Take in the splendid birds-eye views of all below, with more rambling peaks in one direction and suburban Buda in the other.

But this itinerary comes in two parts. In addition to the great and not so physically demanding excursion, there is an enchanting but very abashed and hidden-away St. Hubertus Chapel on the other side of the village. Unfortunately, as is the case with other abandoned sites here and there that have value and should be heritage listed, this once-elegant building has nil protection and is easy prey to vandals and looters.

It’s not easy to find and I only discovered the chapel by chance while taking a rest during a bike ride along the main Fő út through road, which runs parallel with the pleasant Dera stream. Looking up at the hills, I unexpectedly saw a mysterious steeple appearing out of the trees. That was a few years ago and recently I had my calling to return.

The shrine sits on a steep, windy hill and is accessible only from the main road. Generally it still remains unnoticed, unkempt and unpublicised. When the forest leaves are down, this tranquil chapel is obviously more visible from afar and thus easier to find. When the greenery returns to swamp the area it’s more difficult to locate. Regardless of the season it’s worth a visit. The search for St. Hubertus can be challenging but it’s possible to safely find by following the bumpy Kápolna utca.

As of now there is minimal information and research available. This neo-Gothic place of worship was built in 1904 and was respectfully looked after, as shown in this one and only presentable picture, picked out from an online archive courtesy of the Zempléni Múzeum in the far-off town of Szerencs, 200 kilometres east of Budapest. I suggest this photograph was taken a short while before World War II.

Beyond this photo the file is minimal, stating that the chapel was destroyed during the war, rebuilt but then abandoned, perhaps in 1972, and has been in ruins ever since.

Despite its appearance I find that it still carries a dignity, grace and style. The intrigue to find out more about this romantic and charming fairytale-esque landmark remains. It would be great if the St Hubertus Chapel could be rebuilt, from the original architectural plans. I was so glad to have returned again recently and I hope this investigation will continue.

On my recent visit I came across another matter to be further explored next time. At the end of the village leading out towards Pomáz is the grand Margitligeti Castle, which is relatively similar in structural style to the St Hubertus Chapel and which was recently renovated in 2010. Inhabited today by Missionary Sisters and thus closed to the public, earlier it was a sanatorium, an orphanage and, after 1950, a “Special Education Institute”.

Nearby are other significant but ramshackle imperial attributes all within the same timeframe as St. Hubertus. Plus, a nearby active stable points to a vague “hunting” connection, and further research may indicate some form of aristocratic touch. It would be enlightening to know how the nobility lived and developed in the Csobánka area at the turn of the 20th century with these statement value structures, before all took its toll from World War I onwards. 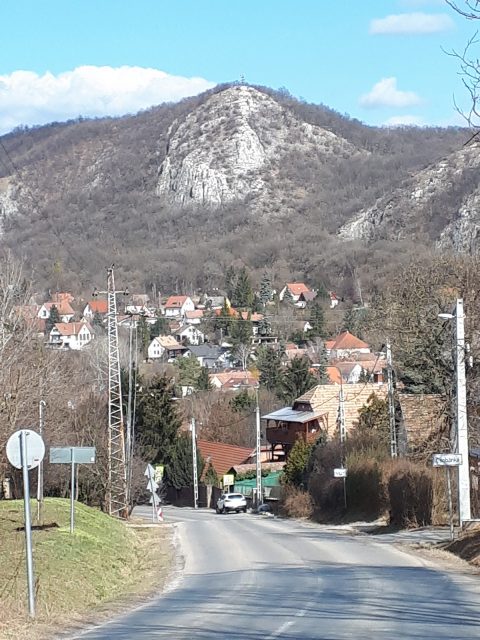 There was an established path to the former, off-the-beaten-track St Hubertus Chapel but only traces remain and it is no longer accessible. Should any readers have further information about this hidden gem, please write in to the “Comments” section. It would be great to then write a follow-on article – as well as to see the elegant chapel finally rebuilt in its original form within my lifetime.

Finally, as a bonus, when summer comes and it’s too hot in the city, another fortuitous reason for checking out Csobánka is the cooler air, with temperatures distinctly lower than elsewhere thanks to the general shelter from direct sunlight provided by the many trees and the rocky formations.

Csobánka is about a half-hour drive, depending of traffic, from either the busy Number 11 Szentendre road, which turns off at Pomáz, or the equally congested Number 10 Komárom road, but turn off at Pilisvörösvár. Either way, both take you to the main Csobánka through road.

Or take the train from Nyugati to Pilisvörösvár and cycle the remaining six kilometres along this same windy route with much high scenery all the way until arriving at the distinct flag-flying Oszoly-Csúcs rock.