Château Béla in Slovakia, a Heritage Hotel of Europe

Raring to go, heading for the horizon

Written by BT
Three months of coronavirus lockdown is enough to make anyone stir-crazy. We're desperate to get out and about again, to go somewhere, anywhere really. Finally, it is a big relief when the borders reopen. We have a booklet of "Historické Hotely Slovenska, a collection of the best historic hotels in Slovakia", and here we find Château Béla, a mere 10 kilometres over the border from Esztergom, so it will get us out of Hungary and into a foreign land with a minimum of effort.

If the borders reopened only this month, June 2020, Hotel Château Béla itself reopened only a couple of weeks later and just days before our visit. Perfect, then, and once across Esztergom’s Mária Valéria bridge over the Danube it is a pleasant sunny drive past roadside fruit and nut trees and through fertile riverside surroundings.

Tractors are at work in the attractive southern Slovakian landscape, the fields growing corn, sunflowers, potatoes, poppies and, we see by accident when taking a photo, someone’s small marijuana crop. Grapes too, which will have a significance on arrival at Hotel Château Béla. 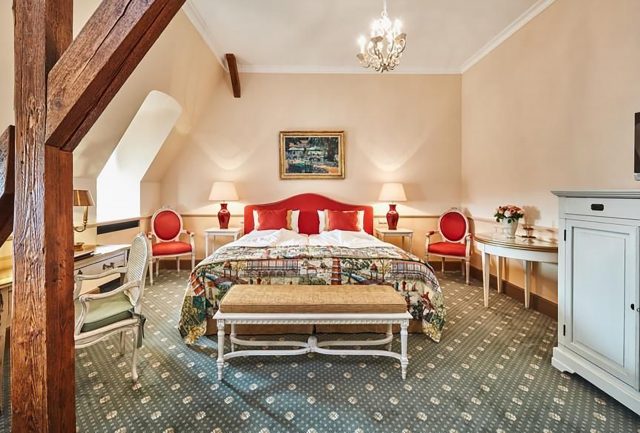 The hotel, more manor house than fortress, turns out to be easily the biggest, best-preserved and most important building in the village, a small one-shop community of barely 10 streets. While we are reluctant to employ the cliché of this being a place where time has stood still, the hotel has its own chapel and the four clocks on each side of the chapel tower are all frozen at 3.05 (whether p.m. or a.m., we know not).

There is some interesting history here. Béla, we read, was first mentioned as a settlement in 1138, although it seems that no one can really say exactly how old the castle is. What is known is that there were many owners of the chateau before the invasion of the Turks in the 16th century, and these marauders left the settlement entirely destroyed and unpopulated.

This remained the case until the early 17th century. In 1732 reconstruction of Château Béla was begun by Janos Terstyansky, a local nobleman, in French Baroque style. The château’s chapel was consecrated in 1780 and it still functions today as the local church, and a popular spot for weddings.

In 1810, Baron Adolf von Ullmann, a nobleman from Budapest, bought the château and in 1925 his son Georg Ullmann inherited it, using it as a summer residence. The socialist government of Czechoslovakia expropriated the property in 1945 and turned it into a “penalty facility” for political prisoners, then a factory for chemical production. Ultimately, it dissolved into disrepair.

Even though the castle has seen a lot over the centuries, it apparently was never as bad as in the time of communism, when all the original features were destroyed, the walls were painted with lime and the furniture was burnt. As noted in the history of the place, in 1990 the château became part of the National Trust, but in reality there was nothing to protect.

Countess Ilona von Krockow, granddaughter of Georg Ullmann, was unable to obtain restitution from the Slovak state and had to buy back the property, in 2000. The building was basically a wreck but the countess determined on a loving restoration into a fine hotel in an authentic and personal way. 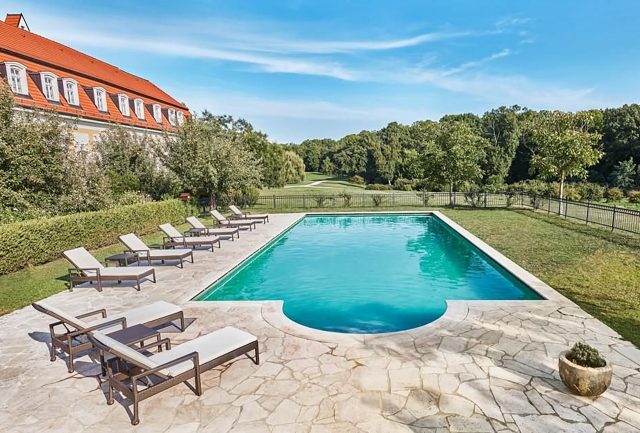 Her aim was to give guests a taste of aristocratic life, rather than the mundane feeling of being in an impersonal hotel, and when Hotel Château Béla finally opened in 2008 she had achieved the desired atmosphere of luxury, calm and warm hospitality. The effort required can be seen in the museum room, where “before” photos and such items as original, damaged doors can be seen. These decorative doors were faithfully reproduced.

An arched entry, a porte-cochère, opens into the courtyard of the splendid property, which is set amid 28 hectares of pleasing parkland, with woods to walk in, three lakes, rose and herb gardens, an outdoor swimming pool, two dirt tennis courts, a children’s playground and a collection of Hereford cattle, sheep and ponies. We fail to spot the peacocks, which must be keeping under cover.

Outside our room’s windows, there is a circular pond surrounded by lavender, white roses and box hedges, and one of the lakes. Fountains fire up at 8am and frogs supply a chorus. Creepers climb the walls and we wish we knew the names of all the wonderful shrubs and trees. The gorgeous flowers are seasonal, so there is always something in bloom throughout the year. There are lawns and white gravel paths, with a small team of gardeners to keep it all spick and span.

Terraces allow for al fresco dining and steps with a wrought-iron balustrade lead up from the well-tended gardens into the grand hall, the Fresco Room. This had lime-covered walls, and when the restorers moved in they discovered a series of paintings showing local sights, such as Esztergom’s Basilica and Visegrád’s castle. Here is also found the Hotel Château Béla’s one remaining original piece of furniture, an elaborate table holding the guest book, discovered during the restoration in the chapel where it had been hidden.

On either side of the hall are rows of classical salons, including a room for playing bridge and a library, and these and the corridors create the warm 19th-century mood desired by the countess, head of a German family, who busily bought up period furniture, paintings and ornaments by the score. Corridor niches contain statues, walls are adorned with African wooden masks from the family collection, there is an old rocking horse here, an ancient wheelchair there. The salons in particular are the embodiment of a romantic castle.

The 44 rooms and suites are all different but all characterised by warm materials. Five types of accommodation are offered, and our first-floor room under the roof was spacious enough to include two huge wooden beams supporting the roof. A whole succession of such beams extends all along one corridor, giving a real time-gone-by feeling.

Like any self-respecting luxury hotel, Château Béla has a premium gastronomic concept in its Restaurant Baldacci, and the ornate Orangerie Ballroom hosts large celebrations and weddings. We discover that some of those vineyards spotted on the way into the village are owned by the family, and supply the hotel’s winery, the Vinotheca. It produces notable reds, whites and rosés, not to mention pálinka, and the various cups and certificates it has won are on display. 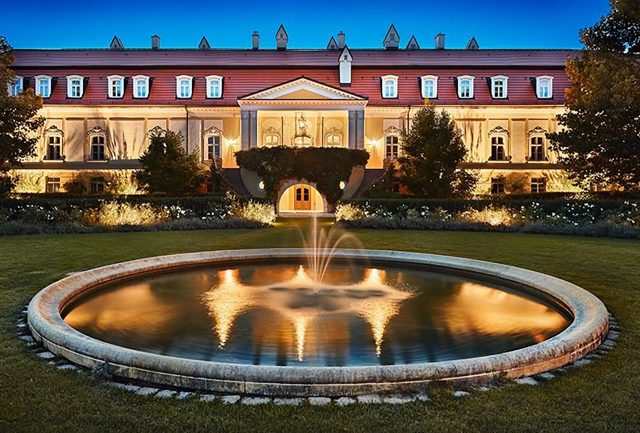 Down in the basement are discovered not dungeons and chains but rather a fitness and wellness centre with a gym, Finnish sauna and steam room. Massages are available. There is a private cinema with large individual armchairs, table tennis, snooker and table football.

Hotel Château Béla offers “best price” packages such as the Power of Silence, which takes advantage of the calm rural setting, Gourmet Dreams and the Romantic Package, with picnics in the grounds. The hotel was voted the Heritage and Romance Award winner in 2013 and 2018, given by the Heritage Hotels of Europe. There will be yoga weekends in September and October.

After opening in 2008 the hotel was confronted by the global financial crisis, and now it needs to recover from the coronavirus. Hundreds of years of history have been survived, and It is again on its way back.