High or low, and sometimes you can have your views both ways

Written by Christopher Osterberg
Can there be many finer views from a hotel’s front rooms than the immense eye-popping panorama deep down into the immaculately laid-out valley that spreads out for kilometres and kilometres before the Grand Hotel Kempinski High Tatras in Slovakia? Well, perhaps there is, guests may argue – try looking out from the back rooms of the same hotel.

Out the back rooms is a second majestic scene, and this time a lot closer: just metres away is a serene glacial lake, the Štrbské pleso, surrounded by towering pines, so tall and straight they seem to be vying to outgrow each other. Immediately behind are the great peaks of the mountains after which the Kempinski is named. Health-conscious walkers and joggers follow the 2.2-kilometre path all the way around the water and amateur rowers pull half-heartedly on their oars as they laze on the lake, all taking in the unpolluted mountain air.

Unlike the distant vista of the valley, with its well-tended farmlands and beyond which we can see the Low Tatras, out back the lake and the High Tatras are right before the eyes, seemingly just outside the hotel. Which one to choose among the 98 rooms and suites: the valley view or the lake view? Both are superb, breath-taking. It’s a tough decision. But the Kempinski Lady in Red informs us that we have been upgraded from a front room to a rear room, so that would seem to indicate which is considered more desirable among guests.

Anyway, could it be that The Budapest Times has a bit of a guilty conscience here and owes readers an apology? For we recently posted a travel article about a road trip starting at the Kempinski Hotel Corvinus Budapest and taking in the various sights along the way before finishing at the Grand Hotel Kempinski High Tatras, at Štrbské Pleso, whereupon we promptly and unceremoniously dumped readers, leaving them high and dry before the revolving door of the luxury establishment, on the outside looking in.

That was that until, just recently, we followed up the article with a short stay at the hotel ourselves, affording the opportunity to relieve readers from suspense. And, in truth, there can’t be many better places to be “abandoned”, so no one should have suffered for long. The Grand Hotel Kempinski High Tatras sits in the ski, tourist and health resort of Štrbské Pleso, 1300 metres above sea level with those mountains out back 2000-2500 metres high. This is one of Slovakia’s most spectacular areas and perfect to clear out the big-city marsh gas that accumulates at the bottom of the lungs.

One of the first things that drivers notice when they get out of their cars after a few hours trip from polluted areas such as Budapest is the bracing scent of the myriad pines, we are told. And “listen” to the silence, broken only by the songs of birds, including a duck flapping its wings as it skims across the lake surface.

This is a place for wholesome pursuits: skiing, both downhill and cross-country, with chair lifts nearby, and hiking on the trails. This being summer, visitors all around are suitably equipped with strong boots and those Nordic walking sticks. Everyone seems to have them, the fit and the not-so-fit. 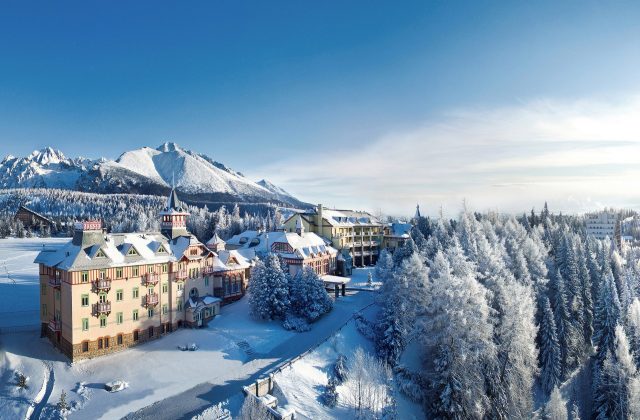 The Grand Hotel Kempinski High Tatras is a five-star complex in the Tatra National Park and is under the strictest degrees of protection. It is a Grade II listed building, making it a national monument. The hotel opened in May 2009 after extensive reconstruction of three adjoining interlinked historical buildings: Jánošík (built in 1893), Kriváň (1906) and Hviezdoslav (1923).

Each is distinguished by its particular architectural form, and these range from historicist design to the modern style of the 1920s. The building became a sanatorium, excellent for respiratory ailments, but fell into disuse in the 1970s until it was renovated from 2005 until 2009.

More than 70 original features were retained during the reconstruction – how many can you spot? – including some carved wooden doorways and their frames, banisters and creaking stairs, and light fittings. Some ceiling decorations were repainted in their original designs. Find the areas with wooden beams overhead. It was the first five-star hotel in Slovakia.

Among those who stay at the Kempinski, sometimes they can have their views both ways. Up on the roof is the Romantic Tower where eye-gazers and hand-holders can indulge in a private dinner all on their own, attended by a discreet waiter. Plus, there is the striking Honeymoon Suite, luxuriously appointed of course with white carpet, gold and silver furniture, deep yellow lounges, an open fireplace and a circular bed for honeymoon or post-honeymoon activities. 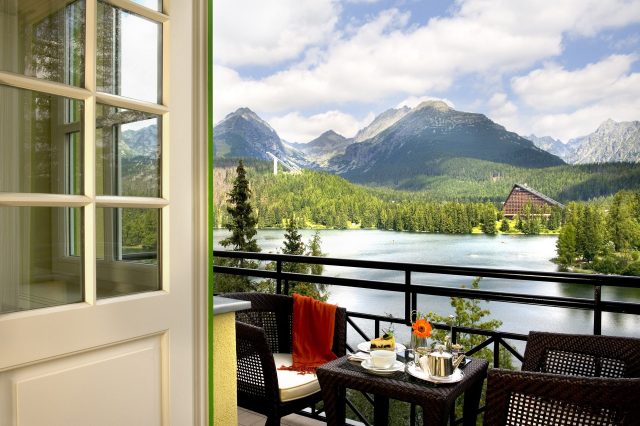 This suite has views both ways and in the middle of the room a curved chrome staircase goes up onto the roof where a personal open-air whirlpool awaits. Now, if that’s not romantic… sitting aloft on top of the world in the pleasurably bubbling water and the exhilarating air with glasses of champers in hand. It’s almost worth getting married for.

The views from these two places, almost in the sky, are truly sensational, both an uninterrupted full 360 degrees. The Kriváň Ballroom, too, faces both the valley out front and the lake and mountains out back, and it is being prepared for a wedding while we are there.

The hotel has a log fire burning in reception, where guests are greeted with a welcome drink of sparkling wine. Another open hearth is crackling in the Lobby Lounge and Bar where Tea for Two can be taken: coconut cake, apple pie, profriterole or cheesecake, perhaps, with a cocktail or one of the dozens of fine whiskys and cognacs, and possibly a Romeo y Julieta or Montecristo cigar in the adjoining smokers room. 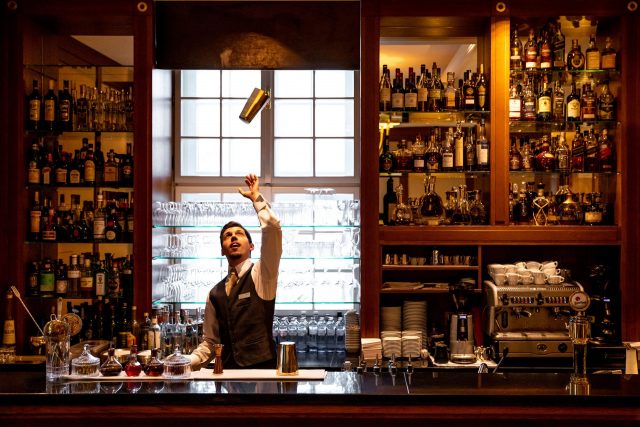 The splendid Grand Restaurant room is further proof that the Grand Hotel Kempinski High Tatras is the only such top-class establishment in the area, and over its dozen years the hotel has seen a good continuity of staff, allowing a friendlier, more family approach than might be found elsewhere.

In the current uncertain health situation, the Kempinskis have a “White Glove Service”, part of their own rigorous cleaning charter that aims to maximise hygiene measures. They are also home to the Ladies in Red, those elegant souls who are now into their twelfth year of looking after guests’ needs and hoping to add a dash of magic to their stay.

The Kempinski group has been hoteliers since 1897 and there are more than 70 worldwide, individually owned and appointed but with the common qualities of top style necessary to carry the name. So they aren’t a chain in the strict sense and you can scrub all that stuff about the homogeneity of large hotels. The Kempinskis pride themselves on unique locations and attributes that set them apart from rivals and even from each other. As we have just discovered at Štrbské Pleso.