A gracious Mediterranean city with an advent time glow

From Zagreb with love

Written by Alexander Stemp
Those who have been to the admirable Adriatic city of Zagreb will invariably recognise the Croatian capital carries a light, Mediterranean atmosphere, even when it's advent time and the season of goodwill. So much so, the centre is ablaze at this time of the year with traditional attire, as well as outdoor partying. Regardless of wintertime chill, it's obvious: Christmas is approaching.

Zagreb, along with Budapest, is considered one of the best Christmas market hosts. Various fanciful festivities and outdoor stalls offering time-honoured novelties such as candles, toys, gingerbread, woolly socks, cakes and so forth are seen in abundance at the charming main Bana Josipa Jelacica Square.

In addition to the locally produced assortment of gifts to fill the stockings, there is a chance to warm up with fortifying mugs of mulled wine, various soups, strudels and other treats. Add to this various illuminated Christmas trees and fairy lights strategically placed around the city, including on other trees and lampposts along the delightfully green urban settings of the Nikole Zrinskog and Kralja Tomislaca avenues. Ice-skating at King Tomislav square is very popular.

There is also a promenade leading towards the classical Zrinjevac Park Pavilion where choirs sing Christmas carols and bands give concerts. It is all very serene and, really, one can say that central Zagreb at this time of the year has a gracious Christmas wonderland atmosphere.

My first recollection of Zagreb, which was years before I actually went there, relates to the 1963 James Bond film “From Russia with Love”. Secret agent 007 (Sean Connery version) has boarded the Istanbul to Venice train with a beautiful female Russian cipher clerk, and danger prevails through the Balkan twilight atmosphere before arriving at Zagreb train station.

See https://youtu.be/Lukb7Xf3AV8 where Bond steps onto the platform late at night expecting to meet a fellow agent, not knowing the agent has been killed and replaced by the Russian assassin who is tailing 007, and he enters Bond’s confidence. A memorable punch-up ensues in Bond’s train compartment, and when “business” is over he and his lady comrade arrive comfortably for a far more pleasurable serenade in a gondola at picturesque Venice, ending the film, mission accomplshed.

So being a compulsive Brit who wishes to support significant heritage abroad, I made a pilgrimage to the Zagreb railway station. Certainly the platform at this otherwise, very ordinary station has a dated retroness to it, which created some incertitude. Finally, however, I took it as a “yes” that the station, with how it looks today, must have turned into a film set for a brief moment almost 60 years ago, and I found myself walking around in Bond’s footsteps but in far lighter circumstances.

Few passers-by suspected I was enjoying my moment in cinema history. It was a distinct contrast to the far more edge-ridden Cold War elements of yesteryear, though next time I will remember to return there during dusk hours and await (hopefully) more secret agent suspense.

Another reason for visiting this landmark was for far less sinister reasons, which relate to the Orient Express. Although the Paris to Istanbul luxury train stopped servicing Zagreb in 1977, it is still interesting to find out who else except Bond had also stepped onto its platform. The list is endless, as the likes of various kings and queens from worldwide appeared there during imperial 20th-century times, and later Queen Elizabeth II. Then there is the Hollywood A-list such as Elizabeth Taylor, Laurence Olivier, Woody Allen and many many more. They would have made their eventual way, within a five-minute stroll, to the luxurious Esplanade Hotel, with its distinct touch of star quality, at 1 Mihanovićeva Street, for further lavishness, until the continuation of their varying journeys.

Those bygone times may have clearly passed into the nostalgia archives but it does not entirely end there. This iconic and elite Belle Epoque delight, which opened its doors in 1925, still hosts the rich and famous today, and one can walk in the footsteps of modern-day heroes (and villains) such as Hillary Clinton, Tina Turner, Hugh Laurie and, perhaps unexpectedly, Guns ‘n’ Roses. The list goes on; need I say anything more? 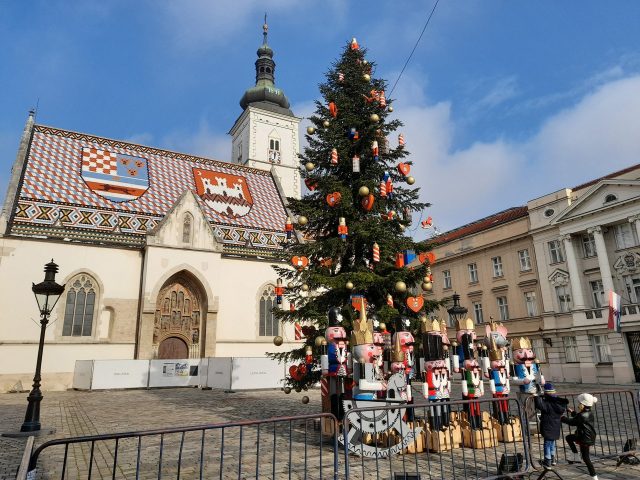 But during this season-to-be-jolly, one does not have to be a celebrity to enjoy the Esplanade’s outdoor Oleander Terrace where advent celebrations are in full flow day and night. This venue hosts a rattling social scene where local people gather year-round, and will surely party all the way into new year 2022.

From the Esplanade, central Zagreb is close by and accessible by foot, so I made my way at leisure with Harry, my excelling tour guide, to the old town and cosmopolitan hub. We passed by the exquisite Art Pavilion, a noteworthy combination of Secessionism and Classicism. This masterpiece was literally re-established in 1861, having originally been transported by train come from Budapest then re-assembled, part by part, brick by brick.

Beyond this point of splendour are the hordes of street cafés, museums and more, with the impressive backdrop of the momentous Medvednica mountain and its ranges in view, when the weather allows. Make your way to the nearby heights for a quick getaway from city life with forest walks, rock climbing and skiing in tranquil surroundings.

It was also clear that there is much local history to divulge into (for another time), which dates back to Roman times. The name Zagreb itself was first recorded in 1134. The Croatian capital, alongside the dreamy River Sava, hosts many churches, palaces, galleries and fanciful ministry departments all within close proximity.

Unfortunately, some of these old and new buildings alike are redundant as of now and closed until further notice, thanks to damage during a March 2020 earthquake. But the city is safe enough for the moment and the various cracks are being repaired, whereupon these wonders will re-open.

Meanwhile there is plenty more to see and do. Turning slightly away from the main boulevard is the most prestigious Neo-baroque Croatian National Theatre, which is another architectural showpiece and delivers world-class shows. It was opened in 1895 by the Habsburg Emperor Franz Josef, who ceremoniously delivered this deluxe venue to the people by tapping a silver hammer and announcing, “Let the show go on!”. The shows continue to roll out today.

From there, continue directly northwards towards the main Bana Josipa Jelacica Square, a renowned meeting point and orientation spot full at present with Christmas festive cheer provided by the decorations, trees and well-patronised stalls.

From there and in the same direction, it’s a jump back from the modern day at the Dolac Farmers Market, which dates to the 1930s. Proceed up the steps and enter the local scene, rather than the commercial sector, with the everyday fruit and vegetable market stalls, various buffets that sell traditional snacks and general Balkan fayre. Feast your eyes on the locally produced sausages, bureks, baklavas, strudels and so on and keep the budget down.

Further in from the earthy market scene is the main Zagreb Catholic Assumption of the Blessed Virgin Mary Cathedral, from the 13th century. Unfortunately, at time of writing this landmark that overlooks the central city is also closed until further notice, another earthquake victim. Still, a nativity scene and some olde-worlde charms are on view.

When the sun goes down, there are numerous bars and restaurants in vibrant neighbourhoods throughout the city, in particular along Tkalciceva Street and Petar Preradovic Square. For a taste of night-time Mediterranean lifestyle, even in December, proceed anywhere there. Many of these venues are in quaint and multi-coloured old-style houses. Most are generally closed until late morning at the earliest, as it is from dusk to dawn that they thrive.

Near the party zone is a slight windy hill, easily accessible from a Saint George and the Dragon statue, and this leads up to the Stone Gate shrine where a monument to the Virgin Mary and a dose of spirituality await.

Local legend states that it was within this immediate area that a fire in 1731 destroyed much except for a portrayal of the Virgin Mary that remarkably survived. This occurrence is still considered as a miracle and passers-by pay their respects by giving a graceful bow and kneeling before her.

Further up the hill is the St. Mark’s Church, draped in a glaze of Zsolnay decorative roof tiles. This surrounding area is also represented by the Croatian parliament and ministry buildings. Then all rounds off with splendid panoramic views of the city close by.

Somewhere below and in between is a 400-metre tunnel that was a bunker during the 20th century. Nowadays it is an open short-cut passageway from one part of the city to another.

Although museums did not feature as I hoped, I had the pleasure of visiting the “80s Museum”, a delightfully simple time-warp that will take one on a journey, still within living memory for some of us, when far bulkier home computers were few and in their infancy, vinyl records still reigned supreme and Yugo and Zastava cars ruled the roads.

I was apprehensive about wanting to consume the Josip Broz Tito chocolates, so I didn’t. After all, supposing there were Margaret Thatcher or Viktor Orbán brands of the same thing?

Outside the city and a short bus ride away is the most peaceful Mirogoj cemetery and sculpture park, partly closed today but an architectural gem that begs to be seen.

Vague this itinerary is, but it’s sufficient to start anyone off for a fleeting view of the city of Zagreb. Certainly it creates an impression of being willing to return another time. 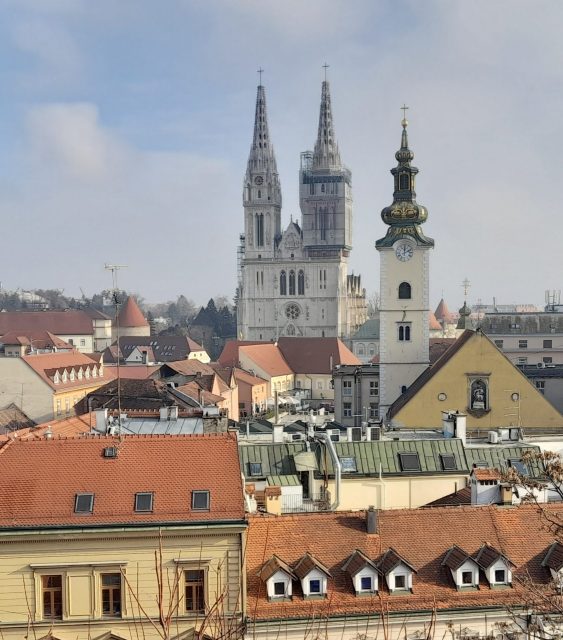 To get there is easy. Simply follow the M7 motorway from Budapest to the Croatian border. At time of writing I was stopped on both sides and asked for all proofs of not only passport and car certificates but, more importantly, I had to present a covid pass card as well as display my covid app on my mobile phone to the officials before I was allowed through. I imagine this same procedure would apply should you wish to take this 350-kilometre journey by direct bus or train. Beyond this respected formality, it was a pleasant four-hour drive, passing by the splendid Lake Balaton.