Culture in the land of the midnight sun

Written by Christopher Osterberg
When Bodø in northern Norway is a European Capital of Culture in 2024 it will offer something that none of the other 60-plus cities and regions across the continent to have held the title – from Paphos to Porto, Rekjavik to Riga – have boasted since the project began in 1985 – Bodø is the first chosen location inside the Arctic Circle.

Bodø’s far northern site some 839 kilometres from the capital Oslo enables the midnight sun to be seen for about a month, from early June to early July. This is a natural phenomenon that occurs during the summer solstice when the North Pole is inclined towards the Sun, thus increasing the duration of the day from 12 hours at the Equator to 24 hours at the Arctic Circle.

And this top end of the Earth also shows off the northern lights, or aurora borealis, another phenomenon of mother nature, created when electrically charged particles from the sun are dragged into the atmosphere by the Earth’s magnetic field and collide with nitrogen and oxygen atoms. This occurrence releases flashes of coloured lights that dance across clear and dark night skies in a celestial ballet with a colour palette of green, blue and sometimes even pink and violet. Northern Norway is dark from early afternoon until late morning between late September and late March, giving the best chance to see them.

The town and port of Bodø is the capital of Nordland county and has a population on the 50,000 mark. It sits at the end of a peninsula projecting into the Norwegian Sea, at the entrance to Salt Fjord. Bodø was founded by Trondheim merchants and chartered in 1816. A commercial-fishing centre specializing in cod drying, it also has ship repair yards and a brewery.

In World War II much of the town was destroyed during a German Luftwaffe attack on May 27, 1940 in which 15 people died and 3500 of the 6000 population lost their homes. It has been completely rebuilt and enlarged by municipal mergers. Reconstruction included a large airport and the extension of the North Norway Railway to Bodø from Lønsdal to the southeast.

It is a compact town and the airport, harbour and railway station are all within walking distance of each other. Places of interest include the 13th-century Bodin Church, Bodø Cathedral, which is Lutheran and is a modern edifice consecrated in 1956, and the Norwegian Aviation Museum.

About 30 kilometres from the town, at the southern side of Salt Fjord, is the narrow marine channel known as Saltstraumen, famous for having the strongest (or perhaps one of the strongest) tidal currents in the world. Boat trips take visitors to its vortices known as whirlpools or maelstroms.

Bodø’s naming as a European Capital of Culture for 2024 is the third time a Norwegian centre will hold the honour, following Bergen in 2000 and Stavanger in 2008. One key differentiator in Bodø’s bid is the project to increase the use of the Sami languages there and around Norway. The Sami are the indigenous people of northern Scandinavia and even have their own Parliaments in Norway, Sweden and Finland. Significant resources are put into preserving the northern Sami language, which is an official language of Norway, along with the traditional culture, so the bid’s success is a big win for the Sami community also.

The bid team wants to create a “pop-culture phenomenon” by spreading Sami through street art, T-shirts and everyday items. The bid’s cultural and artistic director, Henrik Sand Dagfinrud, said the goal is for all young people in Bodø to be able to order a coffee or a beer in Sami. “The point is to create dialogue and understanding between people, including indigenous peoples and minorities,” stated the 2024 application.

Bodø reportedly encountered resistance from the Norwegian government with its plans to gain the status, with the Minister for Culture, Trine Skei Grande, advising the town not to apply, believing it needed several more years before it would be in a position to win. She also refused a request for about $US11 million to support the project.

The team behind the bid chose to go ahead regardless. They were supported financially by others, including a commitment to more than $US2.5 million from the municipal-owned energy company Bodø Energi. The overall budget of $US33.2 million will still require substantial support from local businesses, although the Mayor of Bodø has said the state has since changed its mind, and will now also back the project financially.

Bodø beat out Banja Luka and Mostar, both from Bosnia and Herzegovina, to the title and will become the first European Capital of Culture to be located north of the Arctic Circle. Two other places will hold the title in 2024, Tartu in Estonia and Bad Ischl in Austria.

Many international travellers know Bodø as one of the longer stops on the Hurtigruten coastal voyage or as a pitstop on the way to the Lofoten islands. Yet there’s plenty to see and do in this northern city that functions as the regional capital of Nordland county. 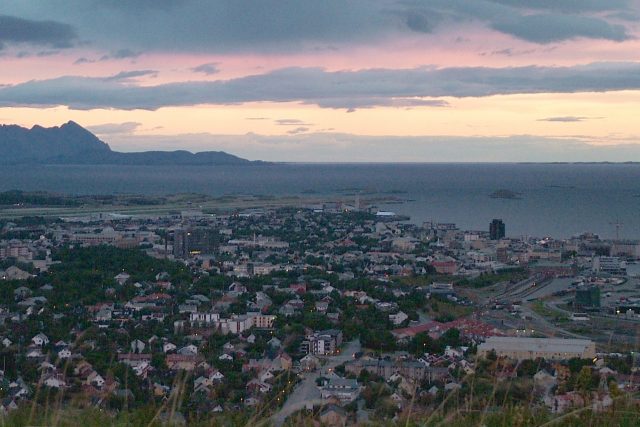 Tourism has grown and nature is the primary draw, with the town sandwiched between mountains and the sea, with everything from hiking and birdwatching to northern lights safaris and boat trips to the Saltstraumen maelstrom.

While many cultural projects are planned for 2024, part of Bodø’s appeal was the cultural investments that have already taken place. Its attractive new waterfront library and cultural centre Kulturkvartalet Stormen will be central to many of the planned activities. The year will be held under the banner “ARCTICulation”.

Organisers say: “Being a European Capital of Culture involves a great opportunity to rethink and develop not only the culture sector but the society as a whole. Nordland is doing great. Unemployment rates are close to zero and we export more than ever. Still, our future is not just bright and free from challenges.

“Like other parts of Norway – and the rest of Europe – young people gravitate towards larger cities and urban areas. This is a true challenge for Bodø and Nordland. One of the main reasons Bodø bid is that we are confident this project has the potential to help reverse this trend. New jobs will emerge and existing industries will get a boost and keep evolving.

“Bodø is facing great change, as the military air base is closing down, the civil airport is rebuilt on a new location, and a whole new district will emerge on the land of the current airport… Bodø 2024 includes the county and the larger region, and Bodø is proud to take on the task of handling a project that can benefit all of Northern Norway, and even the rest of Arctic Europe.

“It’s time for Bodø’s cultural ARCTICulation and to truly open our doors to Europe. Time to challenge the notion that this is simply a cold region, far from civilisation. Only coming alive for a couple of months a year when we frolic in the midnight sun, until we descend once again into winter darkness and cold.

“In 2024 we want to articulate how and why people have settled in our region for thousands of years. That it’s because of – not in spite of – how nature and the climate make Nordland an abundant land.

“Since people set foot in this area some 10,000 years ago, they have restructured and adapted their way of living in response to the change of times. Most importantly, people here have shaped a cultural system which has been absolutely central to our ability to survive and thrive in a region which some would find forbidding and inhospitable.

“ARCTICulation provides an opportunity to show that there is much more to our part of Northern Norway than the stereotypical Arctic image which most Europeans have.  ARCTICulation is our chance to show Europe the pulse of the Arctic.”