Cool and calm while so near yet so far

Written by Alexander Stemp
Apart from Košice, Slovakia's second main city, and Prešov, a university town, one could say that almost everywhere further eastwards in Slovakia, from a tourist perspective, still remains relatively off the beaten track. There are a few exceptions, most notably the out-of-the-ordinary locales of Mikova, where Andy Warhol’s parents originated, and nearby Medzilaborce, home of the grand Warhol museum.

Alongside this famed landmark in the more scenic north-eastern parts of the country are abundances of hills, valleys, mountains and forests, which also roll into Poland. The south-eastern area is generally flatter, arable land that leads into Hungary. In between is the splendid Lake Zemplín, then a short distance further on is Ukraine, which is another story all together.

Although this eastern area is clearly less sought-after than the compelling Tatra mountains in the centre of Slovakia, potentially it could be the next best thing to those better-known peaks, with efficient promotion. Until then, what makes a good start for travelling to this quieter region is that most of the roads there are surprisingly good.

From a Covid perspective, Slovakia is theoretically as safe as Hungary. Although borders are open for now, on my family’s way there by car this July we were stopped by the Slovakian police after we had crossed the Hidasnémeti border between Miskolc and Košice. Our immunity certificates were approved and the procedure was respectfully achieved with smiles all round, but it was clear that otherwise we would have been turned back immediately.

Beyond this point the E71 road led us directly towards Košice and to the main E50 through road which leads eastwards to Uzhgorod (Ukraine) alongside with Michalovce, Slovakia’s easternmost main town that is right next to the desirable Lake Zemplín, known locally as Zemplinska Sirava. Without doubt this lake is the jewel of the region, and is easily accessible from this same road. Although it is artificial, made in 1961-1966, you may not think so as it looks completely natural, and is a wonder and splendour all the same.

I am fortunate to already know Košice, called Kassa by Hungarians, and Uzhgorod/Ungvár. My first visit to this remote and perhaps mysterious region was in the mid-2000s, when I cycled the 100 kilometres between the two, beginning from Uzhgorod.

But with different times today, this singular itinerary is no longer achievable this way. Bikes cannot cross that particular border anymore and the E50 is busier, and therefore less pleasant to cycle on. So to repeat the journey I would take to the Slemence/Szelmenc border and then the less congested back roads all the way. Outstanding scenery will proceed as you cycle by. 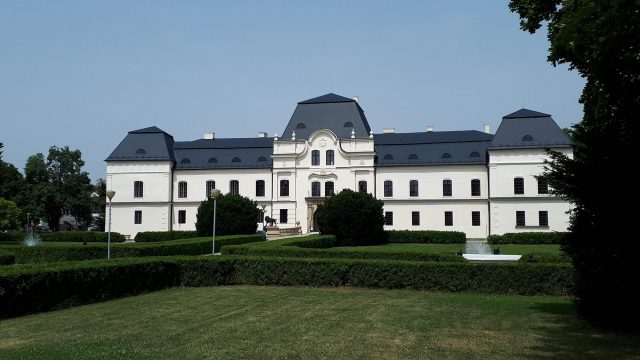 Back on that original trip from years gone by, I cycled freely through sunshine-filled scenery for much of the way until I reached the glorious lake, after some 30 kilometres. There was a 32-kilometre cycle lane around the water to also accomplish, which rounded off with a swim at this highly atmospheric and unspoilt spot.

The following day I sensed an increase in traffic as I cycled from the lake to the nearby outskirts of Michalovce, known as Nagymihály in Hungarian. So I took to the back-roads via Trebisov (Tőketerebes), but except for village after village and stork after stork I cannot recall too much else as later that day I became overwhelmingly dizzy, perhaps from too much sun, and collapsed with fatigue.

This happened at a remote bus stop on the outskirts of Košice and the distant city centre flickered before me like a mirage, until I finally managed to revive and arrive. This was a fantastic achievement. I would love to do it again but better organised next time.

Years later these fond memories returned this July, now with the family. There was a sense of 1970s and 1980s nostalgia as we arrived at the delightfully provincial town of Snina and unpacked at an equally retro campsite, which is surrounded by much refreshing forest greenery. By then it seemed we had not only left our everyday lives far behind but the 21st century in general, which played very well for us. We really needed a rest from computers, concrete and city life in general, without having to travel or exert ourselves too much.

The following day, we drove to Nová Sedlica, Slovakia’s most eastern village, via various wooden churches and other olde-worlde vintage charmers at Topol’a, Kolbasov, Ulicské Krivé and elsewhere whilst en route. Unfortunately, we did not reach the “Krzemieniec-trójstyk granic”, which is a three-way pinpointed landmark at the convergence of the borders of Slovakia, Poland and Ukraine. I look forward to accomplishing this when it comes to another time. 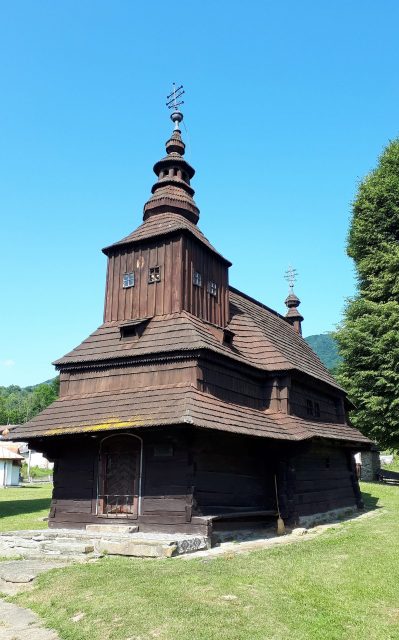 A walk through the abundance of thick forests, made up of beeches and alpine trees, led to the Morské oko, which is a tranquil lake in the Vihorlat Mountains. This was a monumental six-hour round wilderness trip we made from Snina’s neighbouring town, Belá nad Cirochou. In addition, we returned later to round off seeing this protected lush area from high above, namely the Sninsky Kamen, which is a large natural rock formation that one climbs with help from an improvised step-ladder. When at the top, bird’s-eye views of the lake and the Snina wilderness await.

After being overwhelmed and invigorated by all that we saw, it was time to seek local culture. Snina town centre hosts a splendid newly renovated villa with a gallery, library and cultural events, and is worth looking into. There is a striking and perhaps unexpected statue of a handkerchief-waving local lady in the heart of the town centre, and she clearly comes from bygone times. But presumably she represents some form of non-political contentiousness, therefore she stays.

A look around Humenné saw us visit the splendid and partly restored Humenné Mansion, which is a charming imperialistic château that dates to the 15th century. It was rebuilt in the 16th century in Renaissance style and was the seat of the powerful Drugeth family until 1684. It was then handed over to the Andrássy family who reconstructed it in a form similar to a French-style Baroque house, complete with an impressive park and arboretum. Inside there are various vintage artefacts and collectables but not too much on display at present due to reconstruction work taking place. But it is open and repays visiting.

After making delightful sweet-toothed purchases at the exclusive Vatsak cake shop, which is the best in this region, it was soon time to round off by taking the 559 highway 50 kilometres to Medzilaborce to check out Slovakia’s most famous son, who hardly needs an introduction.

It was easy to find the large exhibition hall, which exhibits many Warhol works. This venture is by far the most known and commercial entity in eastern Slovakia, a must-see for devotees who appreciate his skill and sense his edge and brusqueness. But for everyone else, you decide. This follows with various Andy souvenirs, the Andy pension, tea shop and so forth.

As for me, I sense that this is one of these rare, tricky, writing moments when I cannot contribute any further, for if I offer anything more on the Warhol phenomena – tins of soup and all – I wouldn’t expect much recognition for originality in return. All else within this “15 minutes” article would be eclipsed and lost, so I had better stop here and now. Even so, I gave him more than this amount of time when there, and like him or not he has certainly brought a spotlight to this region. It’s clear, visitors have come to Medzilaborce from all over the world.

One impulsive thing I had to do was go to the Ubl’a border in search of some Ukrainian kvas drink, a traditional fermented Slavic and Baltic beverage commonly made from rye bread. Although I enjoyed the drive, alas my wish was never granted. 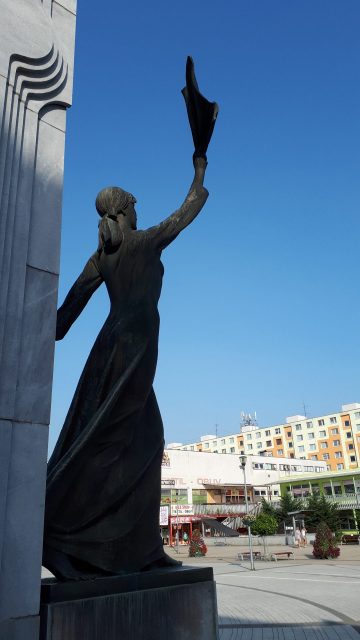 Then, before we knew it, our time was up. A brief visit to Michalovce included a look inside the impressive Zemplín Museum, which is a Baroque-Classicist manor house and hosts a splendour of local culture relating to history and geography. Much the same followed when we made our way southwards to Trebisov, with its history, culture and natural sciences museum, before we crossed the border and were home and dry before the storm broke.

Far eastern Slovakia is cooler and greener, not to mention nearer and less wild, than, say, Transylvania. The area is comfortable, open to tourism and there is plenty on offer relating to high scenery, local culture and some intriguing Socialist architecture. But because there are not too many overly lavish cultural “distractions” there, this too can be an advantage as it simply meant we could rest and enjoy this less-is-more region without cultural “pressure”. There’s no need to rush around trying to see “everything” in one go, as one may do in Paris and Venice, which can be exhausting.

This remote region provided us with a much-needed restful and soulful time over everything else.  Yes, it may be something of a jump back in time but delightfully so. If you like the back country without having to travel too far, and have an open mind, then make your way to the real thing. The region comes with fresh greenery and a mellow atmosphere. What could be better?

But the last thing I want to be is a naïve tourist, and my family and I sensed the tragic past when visiting the renowned crypt at Hostovice, where 112 soldiers, mostly of the Austro-Hungarian army, are buried in a war cemetery. In the vicinity, other places also commemorate the unfortunate heavy fighting.

It was hard for us to leave the cool and calm behind as we forced our way onto the M3 and drove to heat-ridden Budapest. We are missing this richly green region already but we shall return for sure. To get to eventual point Snina it’s a pleasant 360-kilometre drive or train ride via Miskolc, Kosice, Michalovce and Humenné before completion on a single railway line.

My Slovak Spectator article, “Blog: The trials of Slemence village”