What to do, and what not to do, when there

Chilling out at Kékestető Mountain

Written by Alexander Stemp
Kékestető in Heves County is Hungary's highest point, standing at 1014 metres above sea level. Getting there from Budapest, with the M3, takes no more than two hours via Gyöngyös, a small town 80 kilometres east of the capital and close to the scenic Mátra range. Then it's an additional 25 kilometres from this turning-off point to the top itself. Also en-route when in passing on the Number 24 main road are the Mártafüred and Mátraháza resorts before arrival at what is also Hungary's third-biggest outdoor tourist attraction after Lake Balaton and the River Duna.

In addition to the many hiking trails, there are various bicycle lanes within this area, which invariably lead to the summit. But if these options are too demanding, there is a bus service that goes directly there. And easier still, to accomplish this in an instant with even less effort, simply drive up the well-signposted Kékestető turning-off point from the Number 24 road, which, surprisingly, rolls out like a creaseless VIP carpet all the way.

When there, after what were a few brief minutes of minor drive-time from ground level upwards, park the car and simply walk the last few metres towards the prominent Kékestető television tower within this forested peak. Then you have made it before realising. This guiding feature with its antenna is very noticeable from afar, as it stands above all else at this very easy-going and accessible, tourist-friendly summit.

This multifunctional transmitter was built in 1981 and comes with an observational watch tower, thus providing the best views of this immediate area. Also when inside there is a restaurant, closed at time of writing like all others due to the coronavirus situation. Still, at least when the leaves are down, one can also certainly find promising panoramas elsewhere within this immediate area.

Although almost everything in the tourist industry remains closed, it’s still possible and equally pleasant to at least go to the Mátra region for a day trip, regardless of plague and what’s unavailable with general facilities.

In this case, for a quick drive and a burst of the great outdoors, there is no need to prepare too much in advance. (Unless one is heading out towards the lesser known and more ambitious areas, for more serious walking and climbing in the Mátra). But even so, if present-time tourist comforts are not necessarily available, one can still find the occasional shop and outdoor buffets that will provide a little hot something to chase away cold spells. 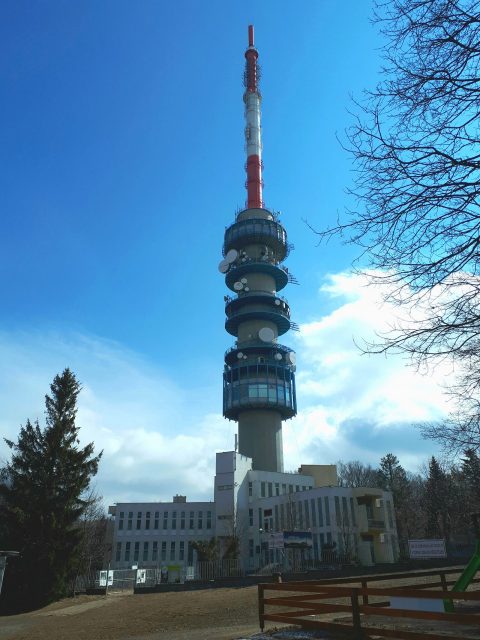 Needless to say, when circumstances finally allow, this climatic health locale, filled with wildlife and natural wonders, will flourish again. Also, most notably the Mátra bike lanes connect to the “Tour de Hongrie” cycle route. But until all returns to normality again, with the reopening of museums and tourist information services and so forth, overcome and be defiant – do the Mátra trails your way. Take a map and persevere to achieve what will be a splendid day out, regardless of all else at this even more tranquil region, due to far smaller crowds and traffic.

For those not familiar with the Mátra range, be aware of surprise weather conditions and prepare well beforehand at this time of the year, even in March-April. This was something I had forgotten from my last visit more than 10 years ago, and I was unexpectedly caught out when there at the end of March.

As I left Budapest it was a clear, calm and reassuring 5 degrees Celsius. But when finally proceeding upwards at Kékestető, all circumstances changed. There were still slight traces of snow that added much appeal as all had long since gone from the city – until I noticed with much alarm that the temperature dial in my car had significantly dropped to minus 5 in a matter of moments.

I then realised my error of absent-mindedness in not preparing properly. The very few other visitors were clearly better dressed and equipped than me, and I felt very out of place in my springtime attire.

Cold, windswept and foolish for underestimating this smallish mountain and its chilly higher-altitude powers, I made my way around in my thin coat and sneakers for a briefer time than hoped. I recalled that in contrast to the very unchallenging route that had brought me there, the Kékes within the Mátra peaks is a far more serious hiking destination in general than most others in Hungary, in particular in comparison to the gentle Buda Hills.

Finally, the heavy and dormant cloud lifted over this immediate area, providing some relief. A few minutes later, while driving away on the main road, the spring climate returned in all its abundance. After being served warm tea and a plate of fortifying pancake rolls filled with jam at a welcoming roadside caravan serving takeaways, I took my final leave.

I would have written and explored more had I been better prepared and had more time. But this warm-up and re-introduction were as much as I could have hoped for on that particular day. Therefore, like this article, like this occasion, both were too brief. However, I will look forward to returning and seeing plenty more by foot or bike, and really justify my next visit in a more environmentally friendly way, leaving the car and main roads behind. Then deliver a more telling article soon afterwards.