Written by Christopher Osterberg
The World Travel Awards are called the “Oscars” of tourism, the industry's most prestigious accolades, and to host the annual ceremony rewarding the very best of the best is a much-desired honour. Next year the distinction will fall to Batumi, thus recognising the Georgian city’s fulfillment of the potential it showed in 2019 when it won the World Travel Award for “Europe's Leading Emerging Tourist Destination”.

For years before the win, Batumi had been undergoing a metamorphosis. Once an average sort of place on the Black Sea coast in the shadow of the Caucasus Mountains, and a corner of the former Soviet Union, now it has become a brash and hip gambling town, a whirlwind of outlandish building projects offering glitzy high-class luxury hotels and flashy casinos.

The fantastical metropolis with a “bigger is better” mantra encompassing modernist skyscrapers and brighter-than-bright lights has been described multiple times as the “Las Vegas of the Black Sea”, and perhaps they like the appellation and perhaps they don’t. But it certainly grabs the attention, and attention is welcome.

Where else would you see a golden Ferris wheel built into the side of a towering building? Fountains are bathed in colourful spotlights and spurt in time to pop music blaring out of speakers. At night the whole city is lit up in multiple colours and the palm trees are illuminated in neon. What Batumi does like to call itself is the “Pearl of the Black Sea”.

Everyone, locals and visitors, soon finds themselves strolling along Batumis bulvari, the buzzing beachside boulevard fronting the main beach. Laid out originally in 1884 and now extending 7 kilometres along the beautiful subtropical coast, this promenade is the life and soul of Batumi with its warm sea air and medley of trees, paths, “dancing” fountains, boutiques, cafés, beach bars and a few quirky attractions. The people-watching potential is great and the beach itself is fine, though stony, and is kept nice and clean. 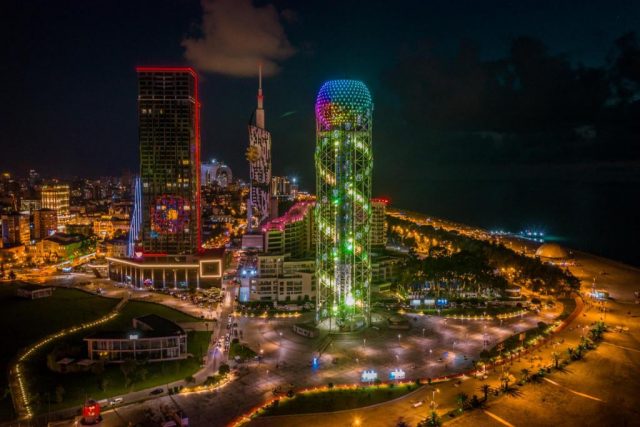 Despite what might be thought, beneath Batumi’s superficial glitz and glam there are some 2000-plus years of history and authentic culture to be had, with ancient sites among the sunny and mod, pleasure-seeking atmosphere. The excellent Batumi Archeological Museum, for instance, showcases some of the many valuable discoveries made in Adjara, the autonomous region of Georgia of which Batumi is the capital.

The main room begins with the remains of hominids, which are the group of primates that includes humans, gorillas and chimpanzees among others, from 1.7 to 1.8 million years ago. You then move through remarkable Bronze Age daggers, Iron Age jewellery, Hellenistic pottery, Roman artefacts and a splendid display of Byzantine gold.

The Gonio-Apsaros Fortress is an awe-inspiring piece of Roman-Byzantine military architecture that extends 47,000 square metres within a rectangle of high stone walls with 18 towers. It was built by the Romans in the 1st century AD and occupied by the Byzantines in the 6th century and by the Ottomans in the 16th century. An interesting little museum occupies the centre of the site with a cross outside marking what is thought to be the grave of the Apostle Matthias, who, according to the Acts of the Apostles, was chosen by them to replace Judas Iscariot after the latter’s betrayal of Jesus and his subsequent death.

Batumi’s Botanical Garden was founded in 1912 by Russian botanist Andrei Krasnov 8 kilometres north-east of town. The many rare subtropical and foreign species extend just over 1 square kilometre over a hillside rising straight out of the sea, and it takes about 90 minutes to walk the main path at a leisurely pace.

Kolkheti National Park, 70 kilometres from Batumi, can be explored by taking a boat out on Paliastomi Lake, and Kobuleti Nature Reserve, 35 kilometres, is a pancake-flat landscape with boardwalks. Machakhela National Park (25km from Batumi) is another great option for hiking, bird-watching, swimming and local history.

In addition to lakes, waterfalls and marshes, you can find more than 20 beautiful arched stone “Tamara” bridges from medieval times, secluded cabins and old mosques in this part of the country. Another bridge, the wooden Khabelashvilebi, is some three centuries old and can be found in the village of that name in the Chvana gorge. The mild year-round temperature and high mountains for skiers make the Ajara region a four-seasons destination. 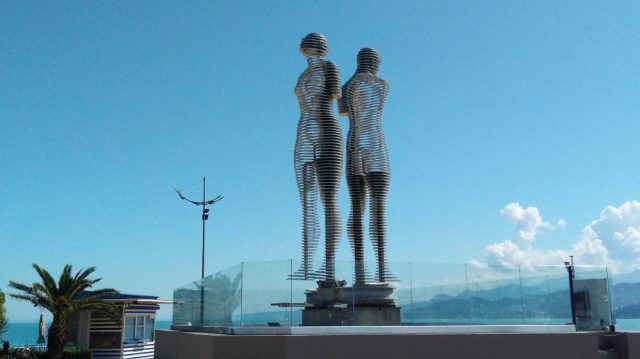 Back in the bustling city, among the street art and sculptures is the 7-metre-high metal sculpture Woman and Man by Tamar Kvesitadze, which is universally known as Ali & Nino after the protagonists of Kurban Said’s 1937 novel of that name (see it after dark).

Batumi’s only surviving mosque, the Ortajame, built in the 1860s, is finely painted in pinks, greens and blues, with Quranic calligraphy on the walls – but is no longer big enough to accommodate the faithful who overflow on to the streets during Friday prayers. Batumi’s Muslims have been seeking permission to build a second mosque for years but it has still not been granted, largely due to objections from the Georgian Orthodox Church.

The Batumi Tower is Georgia’s tallest building (even if much of it is its needle) at 200 metres, and it is the building that boasts the mini Ferris wheel implanted in its side. Constructed to be a technological university, it was sold off instead to be a Le Meridien hotel (now one of 401 hotels to choose from). 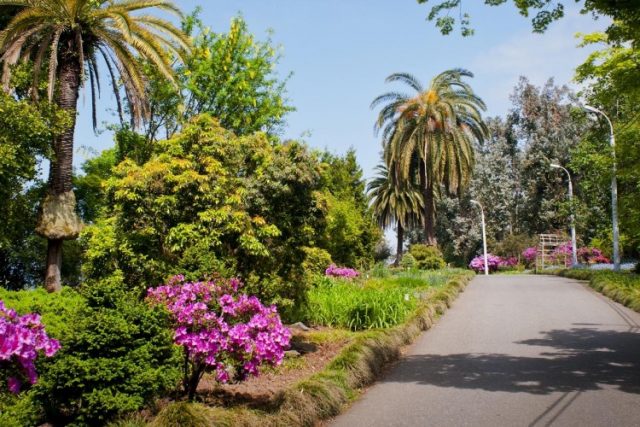 Evropas Moedani is the broad Europe Square surrounded by beautiful belle-époque buildings – renovated survivors from Batumi’s original heyday, plus new buildings in a similar style. The square’s musical fountains are a magnet for kids on hot summer evenings. Similarly, the Batumi “Piazza” is said to be one of the most beautiful squares in the whole country, with hotels, restaurants and cafés, and its use as a popular entertainment venue.

Towering over the square is the Medea Monument, a striking portrayal of Medea, the local princess who would help her future husband Jason obtain the Golden Fleece. A monument to “the person who brought Georgia closer to Europe”, according to Batumi’s mayor when it was unveiled in 2007, it was sculpted by Davit Khmaladze, and controversially cost over one million Georgian lari, the national currency.

“Unique” can be an over-used word but perhaps not when it comes to describing booming Batumi.