Written by Christopher Osterberg
This year’s three European Capitals of Culture are Hungary’s own Veszprém-Balaton, Timisoara over the border in Romania and the Greek seaside town of Elefsina, the latter being the smallest and oldest in the history of the program since it began in 1985, coincidentally just 20 kilometres away in Athens.

All three centres promise large and diverse offerings throughout the calendar year, and while the outskirts of Veszprém are no feast for the eyes, Elefsina too is said to be no picture-postcard Greek town, the antithesis of that countrys winding alleys and sun-seekers sitting outside taverns in the warm and taking in the sparkling crystal blue sea.

Elefsina, population somewhere around 25,000, plans to explode this typical image of Greece. Instead, visitors will find plain flat-roofed buildings, industrial ruins and a ship graveyard where disused boats are left to rust on the waterline. But in amongst all this are smiling people, warm-heartedness, openness and beautifully tended gardens.

The town, known in ancient Greece as Eleusis, has been called the unpainted face of the country: authentic, scarred, silent, dignified. Perhaps this is what tipped the scales in Elefsina’s favour and persuaded the panel of cultural experts to select it for 2023.

Here, in the birthplace of the great ancient Greek playwright Aeschylus, 465 events will take place in 30 different locations. The program for the year –  titled “Mysteries of Transition” – will bring together 192 Greek and 137 international artists in 17 different disciplines. The concept is built on three thematic pillars: people, society, and environment and work.

The general artistic director of Elefsina European Capital of Culture is 66-year-old director and actor Michail Marmarinos. Speaking among the ancient ruins of Eleusis, which are found in the centre of modern-day Elefsina, he tells how thousands of years ago people came to Eleusis in the hope of gaining an insight into the mystery of death with the help of the Eleusinian Mysteries – some of the most important initiation rites in ancient Greece.

Although little is known about the great Eleusinian Mysteries, Marmarinos says ancient Eleusis has shaped our modern lives in one very significant way. “It was here,” he explains, “that people began cultivating wheat. And it was at that point that people ended their itinerant lives, stopped their nomadic wanderings in search of food.” Marmarinos seems to know this magical, reverence-inspiring site intimately, and his enthusiasm for the program of events is palpable. “Civilisation begins with the cultivation of the earth,” he adds emphatically.

A stone’s throw away are the ruins of the Telesterion, a great hall that Marmarinos describes as the first “informal” theatre of the world, informal in the sense that the concept of theatre as we know it today did not exist at the time. 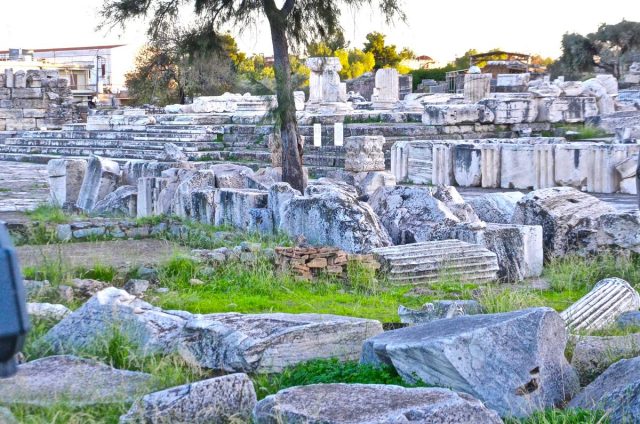 Here, choreographer Sasha Waltz and director Jochen Sandig will put on the “Human Requiem,” a symbiosis of sound, music, natural light and the human body. Marmarinos says that this aesthetic experience will show the audience that language alone is not enough. Romeo Castellucci’s work “Ma” will also be performed here. What the title means or what the performance will entail remains a mystery at this time.

Another of Elefsina’s historical pillars is industry, which has been both a blessing and a curse. It was a blessing because it provided work and a livelihood for thousands of refugees and displaced people who flocked to the region after the destruction of Smyrna (modern-day Izmir, Turkey) in 1922.

But it was also a curse because the oil refineries, cement factories and other industries that existed here right up until the 1990s brought more than just employment and prosperity. Elefsina is in the western part of the region of Attica, which has some of the highest rates of cancer and pollution in Greece.

The past 30 years have seen a sharp drop in industrial activity in the region, which in turn has resulted in the economic decline of Elefsina. Industrial ruins are dotted all over the town. An old paint factory has been earmarked for redevelopment in 2023. The aim is to turn it into a cultural centre that will be part of Elefsina Capital of Culture’s legacy and continue to be a cultural magnet even after the year has ended.

One of the first guests will be visual artist Juan Santovala from Colombia, who plans to create a work of art dedicated to the city’s workers. People who have worked in the region’s factories, or indeed still do, will be involved in the project. A ceramic helmet will be produced for each of them and given to them as a gift once the exhibition ends.

Another location that is currently a construction site is the old olive mill, which was home to a flourishing soap factory from 1875 to 1960. It is being renovated and turned into a meeting place and centre for the arts.

The first exhibition to be held there will be dedicated to Greece’s former Culture Minister Melina Mercouri and her French counterpart, Jacques Lang. It was Mercouri who came up with the idea for the European Capital of Culture program in 1985, starting with nearby Athens, and Lang was heavily involved in its realisation.

Right beside the old olive mill is an open-air theatre where, among others, the National Theatres of Novi Sad (Serbia) and Seoul (South Korea) will perform in 2023.

Then there is the ship graveyard in the bay of Vlycha, where some 70 old wrecks have been left to disintegrate, polluting the sea with oil and rust. For many residents, it’s nothing more than an eyesore that the Greek state has ignored for decades. Yet the abandoned ships are, in their own way, strangely fascinating: What have they seen? Where have they been? What stories could they tell? Just what Elefsina Capital of Culture intends to do with the site in 2023 is another mystery.

Above all, the inhabitants of Elefsina hope that being a European Capital of Culture 2023 will bring prosperity. They also hope it will attract many visitors from all over the world and that the central government in Athens will not forget them once it’s all over next December.

Being in the cultural spotlight is also a motivation for the locals to build, repair or clean up the city’s streets, squares and footpaths. For them, 2023 might well be a once-in-a-lifetime opportunity to pave the way for a brighter future.

An artist once said that anyone who can change Elefsina can change the whole world. And there are certainly enough reasons to want to change this small seaside place.