Mystery Hotel Budapest is a place of mystery, magic and adventure

A surprise in every corner

Written by Christopher Osterberg
Mystery Hotel is a name that cannot be ignored or misunderstood. It makes other hotel names sound commonplace (mention no names, spare their blushes). Budapest has had the Mystery Hotel since March 2019, and surely when inquisitive types hear about it they must be tempted to go along and see what it’s all about.

While there may be only a small chance of finding a corpse with a knife in its back in the hotel spa, Agatha Christie-style, or secret agents staking out the place in search of shady characters who look like spies, Frederick Forsyth-style, there are indeed mysterious things in evidence, mysterious enough to live up to the evocative name.

Why is there a carpet “flying” up near the ceiling, Aladdin-style, in the reception area? Why do the lifts have “curtained” doors and look like art galleries inside? Why do the chandeliers in the conference lounge seem to stretch to infinity? Why does the girl in Johannes Vermeer’s 17th-century painting “Girl with a Pearl Earring” have a smartphone in her hand? And why is there a square and set of compasses – the international symbol of the secretive freemasons – carved into the stone outside the bedroom window?

The Mystery Hotel Budapest is on Podmaniczky utca in District VI, on the corner of Vörösmarty utca, and, fittingly, it owes its present incarnation to its century-plus of history. It was in 1886 when two freemasonry groups, the Blue Lodge and the Scottish Ritual Grand Orients, merged to create the first headquarters of the Symbolic Grand Lodge of Hungarian Freemasons.

In 1890 the new grouping proposed the construction of a lodge house, and they received 12 different architectural entries. The design of Vilmos Ruppert was accepted, not surprisingly himself a freemason, belonging to the Old Calls Lodge. The completed building, something of an eclectic palace, was finally solemnly handed over in 1896. 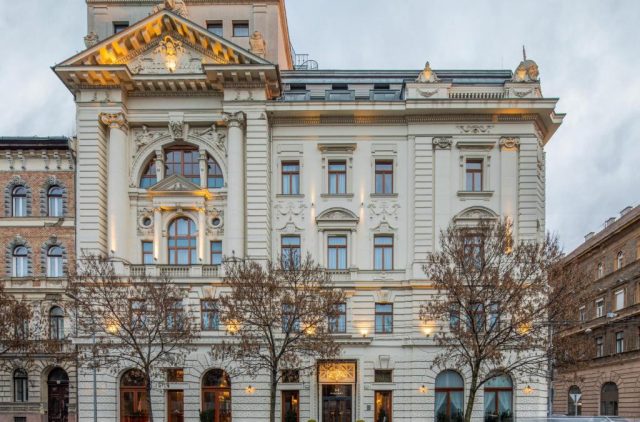 The building became a hospital for the wounded from the bloody battlefields of the First World War, operated by the Grand Lodge. But then, history tells us, the former Republic of Councils in Hungary and later the Interior Minister of Hungary, Mihály Dömötör, formally banned the activities of the freemasons. Internationally, the secretive brotherhood was often subject to religious and political opposition on the grounds that it was a dangerous sect with its rituals of private lodge handshakes, signs and words, and acts of mutual advancement and favour-swapping.

In May 1920, the Hungarian Association of National Defence occupied the lodge house. After the Second World War, freemasons again used the building for a short time until 1947, when the Interior Ministry occupied and used it until the regime change in 1989. The current status of the building was completed under the guiding hand of Hungarian designer Zoltán Varró in 2019, and the Mystery Hotel Budapest came into being.

Before, as now, the soul of the building was its centrepiece and most important area, the Great Hall on the fourth floor (also called the Temple or Atelier by various lodges), scene of many masonic rituals. This inner sanctum of the freemasons was built in Egyptian style with a large chandelier, columns, heavy curtains, two iron spiral staircases leading to the loggia, or gallery, and a chessboard floor.

Today this is the Great Hall Restaurant & Lounge, and the good news is that it is open to the public as well as hotel guests, as are the Secret Garden Day Spa, which is in the courtyard with a Jacuzzi, sauna, steam room, treatment rooms and gym, and The Sky Garden Rooftop Terrace on the seventh floor. 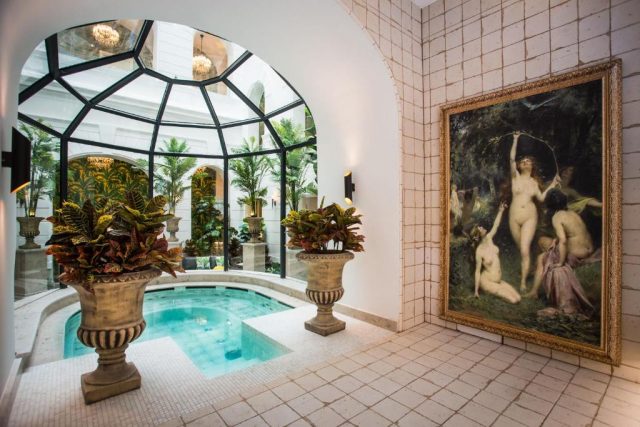 When Varró was asked to convert the old freemasons’ headquarters into a modern and luxurious place of mystery, magic and adventure to delight travellers, his brief was that upon entering the hotel you should feel you are going to a special world. Just as the life of the freemasons was full of mystery, so then has the hotel, all these years later, become a home to legends and secrets.

The theme was not only inspired by the freemasons but also by various mystically themed books and films. The concierge at the front of the Great Hall Restaurant & Lounge has a small library from which guests may borrow such items.

Around the hotel is a world of optical illusions making use of velvet curtains and lush textiles, hidden details and secret doors, dramatic chandeliers and flickering candlelight. Light boxes on the corridor walls contain shimmering animated paintings. The grand staircase that greets guests as they arrive from Podmaniczky utca gives the impression of entering a museum, or perhaps a mansion or castle. The stone staircase goes up to the fourth floor, the building’s original height. Decorative stone floors remain in the corridors, and all the building’s fine original features are heritage protected.

Three storeys were added later to the original four, and the seventh-floor Rooftop Terrace and bar look across the city to the distant Royal Castle, with Nyugati Railway Station off to the side.

Mystery Hotel Budapest is boutique-style and is one of only two theme hotels in the city. It has 82 rooms including seven studios and suites. The top-floor rooms have a small balcony and all the rooms have marble or wooden bathrooms, old-style mini-bar cabinet and antique-looking phone, a safe, and a tea and coffee maker. 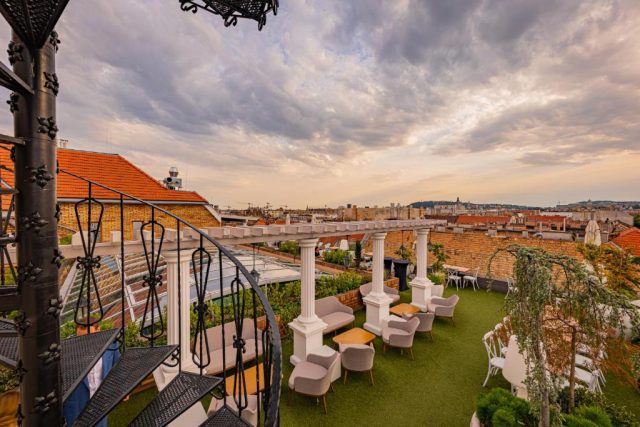 In keeping with the history-meets-modernity scheme of things, the large painting in each room has a modern twist, such as the Vermeer and a Mona Lisa with sunglasses and VIP pass. Another da Vinci, his anatomical Vitruvian Man, adorns the Atelier Suite, which is done up like an artist’s garret, albeit a rather lavish one.

As well, all 82 rooms are designed in three different ways aligned with a Greek column style: Corinth, Ion or Doric. The latter are located by the courtyard, overlooking the attractive Secret Garden, and atop the hotel next to the Sky Garden and offering expansive views of the city. The Doric column order has the most difficult, yet simplest forms and proportions, and in these rooms an English Victorian style dominates.

The Ion rooms are on the top floors with a lighter and more elegant layout to reflect a French mansard style. In the Corinthian rooms classical burgundy velvet curtains are featured. The furniture is sumptuous and styled in baroque, so the guests can feel like a real aristocrat. All Corinthian rooms and suites have city views.

All in all, the words “one of life’s great mysteries” may spring to mind.