grätzl hotels put guests at heart of a community

A shop window onto Vienna’s streets

Written by Christopher Osterberg
The variety of hotels in which The Budapest Times has bedded down in quite a few countries in the past decade has covered a gamut, from imposing – and costly – palaces with liveried doormen and Rolls-Royces outside to those chain-type places that are comfortable enough –and more economical – but tending to the nondescript. In Vienna, we have found that there is still something new to be discovered in the hotel world.

Cities have their individual neighbourhoods and quarters, where relatively small and self-contained communities exist within the larger urban area. Berlin has its “kiez”, Barcelona has its “barrio” and Vienna has its “grätzl”. These are places where the locals shop for their food, flowers and fags, take the kids to school, go to the park and walk their pets, and have a coffee and check their phone, all the while getting to know one other and stopping for a chat.

And so “grätzl” is the name that was chosen for these three different-style Viennese hotels, because that’s the idea – that the visitors passing through for a while will get to experience and perhaps share in some of the community life before they move on.

To this end, the grätzl hotels aren’t what we strictly expect of a conventional hotel. There isn’t a lobby or a reception desk – the owners say the lobby is the streets and the parks and markets outside. You don’t check in or out in the normal way, and the accommodation is more like a studio apartment than your usual hotel room.

The big thing is that all the rooms – suites, actually – are on the ground-floor in what used to be old shops and workshops or storage areas. The former tradespeople – old professionals such as tailors, lamp-shade makers, blacksmiths, bakers, electricians, tobacconists, gallery owners and the like – have moved out to perhaps more industrial areas or cheaper, smaller premises. Thus many of the rooms are a direct “shop window” onto what’s happening right there outside, on the street. 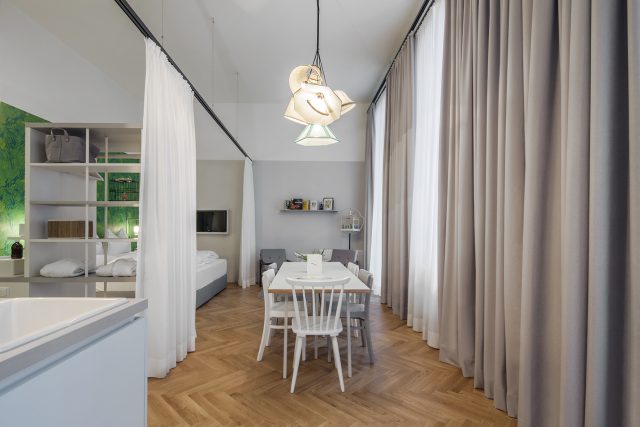 The concept of bringing new life to these disused places comes courtesy of the Urbanauts Hospitality Group, formed by Viennese architects in 2011 to reinvent the shops as smart hotel accommodation designed to offer an authentic Viennese feeling for visitors to the imperial city. But while many tourists stick doggedly to the splendid sights of the Innere Stadt, or Old Town, and more routine hotels, the three grätzl hotels offer an alternative world beyond.

The first grätzl hotel, called grätzlhotel Belvedere, opened in 2011 in Wieden, a small district south of the city centre and containing the Karlskirche baroque church, the Naschmarkt which is Vienna’s largest and trendiest market, the Vienna Museum, a number of embassies and the Karlsplatz Stadtbahn station created by architect Otto Wagner (1841-1918) in Art Nouveau style. Belvederegarten, containing Schloss Belvedere, borders the district, and Vienna’s central railway station, Hauptbahnhof, where Hungarians now arrive rather than at the previous Westbahnhopf, is right nearby.

On a three-day stay in Vienna, The Budapest Times selected grätzlhotel Karmelitermarkt from the three, not for any particular reason. This is in the city’s second district, Leopoldstadt, and has the advantage of enjoying the neighbourhood feeling while still being a mere half a kilometre from the Donaukanal (Danube Canal), on the other side of which the Old Town immediately begins.

On arrival, this grätzlhotel is just like entering a Budapest or Viennese residential building. A couple of days before arrival, they send you a pin code, and this releases your key in a key safe at the large wooden door. Once inside, we pass through a typical tiled hallway lined with the residents’ mailboxes and go through to the courtyard, where there are three suites. The others are on the outside of the building, facing directly onto the street. All the five floors above are occupied by Viennese residents.

Our suite is the “der hausmeister” (the caretaker). The other two in the courtyard are “der vogelfänger” (the bird catcher) and “die gärtnerin” (the gardener). Those facing the street include “der laternenanzünder” (the lantern lighter), “der elektriker” (the electrician), “die knopfmacherin” (the button maker) and “die lampenschirmmacherin” (the lampshade maker).

The nine suites at grätzlhotel Karmelitermarkt now include two new ones that opened in May 2019 at Afrikanergasse, 10 minutes’ walk away. As mentioned, our room “der hausmeister” is like a studio apartment, with a kitchenette and dining area before two steps take you up to a raised sleeping area with separate toilet and shower, the latter having a choice of conventional or rain shower. There is a TV, old-style radio, geometric-design furniture, coffee machine, a safe for valuables, hairdryer, and robes and slippers. 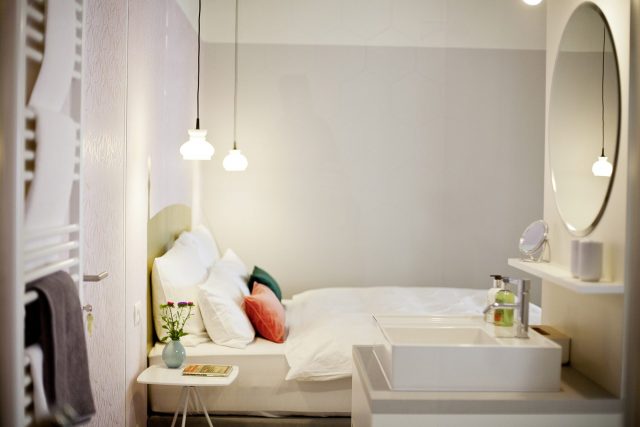 A little seating area just inside the door allows guests to watch the world pass by in the street or courtyard. Determined to enter into the spirit of things, we go exploring the neighbourhood. Right outside this grätzl is a small playground where mums gather with their offspring, perhaps to discuss the worldwide political situation or simply swap birthday cake recipes.

Karmelitermarkt is just 30 seconds walk away, and has a number of small permanent structures holding local businesses week-round, and a larger open area that looks like it will be occupied by farmers’ market and handicraft stalls at the weekend.

Here are plenty of restaurants and bars, and deli shops, plus a handy apotheke for something to counter the effects of over-indulgence in the bars. We try a coffee and rum ball in Fett+Zucker, a funky little café where the chairs, lounges and tables are all fashionably mismatched, and Manchester’s New Order is providing the background music.

Wulfisch has “the taste of Hamburg brought to Vienna”, namely typical cuisine from north Germany. Pizza Mari has that Italian contribution to world cuisine and Bioladen Zimmer 37 boasts organic and fair trade gourmet food from all over the world. We also see a Vietnamese restaurant and a general Asian restaurant.

At BlumenArt (FlowerArt) they say they have the most beautiful roses around, and the enthusiasm to tell you all about their passion for blooms. Petra Raab’s Wundertüte promises fashion from all over Europe, and a new companion for this grätzlhotel is MADAI Aperitivobar, who are the on-site contacts for guests and where a welcome drink can be enjoyed.

Leopoldstadt is a partly Jewish district, and quite often Orthodox Jews are seen adding colour to the streets (even if they are dressed all in black, they still add colour). We spot a couple of kosher food places and there are some Jewish prayer rooms. On the pavements outside houses can be seen stolperstein, or “stumbling stones”, those little brass squares commemorating Jews who lived there before deportation in the Second World War to Adolf Hitler’s death camps. 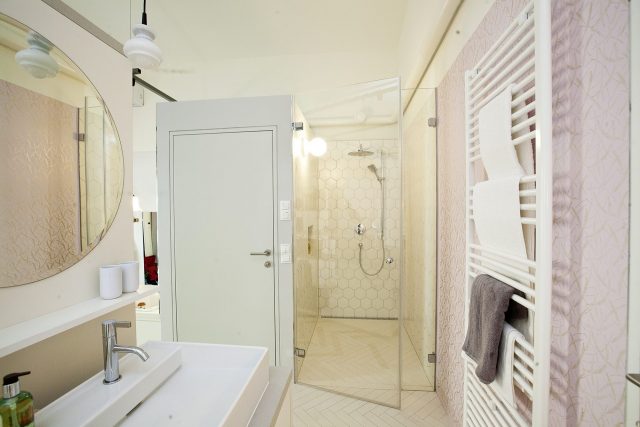 Just up the road from grätzlhotel Karmelitermarkt is the Kriminalmuseum, with exhibits on crime, punishment and murder from the Middle Ages right up to the present day. It is in one of the oldest buildings in the Leopoldstadt area, the “Seifensiederhaus”, or “Soap Boilers House”, dating to 1685. Twenty rooms of this 324-year-old home are devoted to violent death, counterfeit money, lock picking, brothels and more.

As was the case when we arrived at grätzlhotel Karmelitermarkt, when we check out there is no one to see (the staff are a phone call away). We just leave the key on the dining table and any money owed for the mini-bar. Outside, the smart light-grey Trabant with Austrian registration plates that had been parked in the same place for all the three days we were in residence was still there.

Across the little play area is a real estate agent, in case you like the area so much you might like to move in. Further down the road near the canal is a travel agent, in case you have done something worthy of the crime museum and might need a quick getaway.