Back to where it all began

Written by Alexander Stemp
Anyone who knows anything about local tourism will surely agree the upmarket and prestigious Castle District is one of the first attractions high on anyone's list to see. Certainly this was the case with me many years ago when I first appeared on the Hungarian scene and wandered up this “unfamiliar” hill in a disoriented haze at the height of summer.

Sometime later, after officially unpacking bags and signing all certified dotted lines to enable my long-term stay, there came a distinct crunch-time when one surpasses these favoured tourist landmarks, including this momentous highlight with its huge historical importance. Then that’s it for a while until one’s friends, new to town, show up and make obvious demands to rightfully see the outstanding Halászbástya (the Fisherman’s Bastion) and the exquisite Matthias Church, similar in style to St. Stephen’s Cathedral in the centre of Vienna. Not forgetting the symbolic and masterful St. István statue, alongside various museums, art galleries and so forth.

Then, when accomplished, it’s important to remind them, as well as yourself if need be, that despite the highly romantic and touching atmosphere this locality has, life’s not always the real thing.

I don’t say this to be dismissive. The Castle District with its internationally renowned National Gallery and host of top-end museums is undeniably splendid. But it is a real contrast to all else here in the city. With its additional heady mix of period architecture, exclusive state-of-the-art shops, very refined hotels and bistros, this prized tourist draw is comparable to the fanciful French Riviera. Therefore, a visit to the Castle District for me, and many other Hungarians or non-Hungarians alike based here, is like “going abroad” and provides a culture shock when there.

After a while, one naturally moves on from this elegant but overdressed touristy honey-hive. Once we have been “seduced” in one way or another within this ritzy, spirited place, it is the case with me and others I know that few return until some significant time later.

Since I became an official Budapester, I can honestly say I have only returned there perhaps every two years. Not that I meant to be neglectful but I have been to the Záhony border with Ukraine more times than here. Lovely though it is, the average Budapester may feel out of depth when in the Castle District. Especially with the over-inflated prices – when the next lot of guests come, let them pay for elevenses. It will be a bargain for them.

Despite the current loss of the pre-pandemic parades of fine street buskers and artists, the obliging ice-cream sellers and popcorn vendors, plus the avid pot-pourri of dodgy tourist clichés leading the way forthwith, even today with only some shops open there is a holiday atmosphere that continues to make life pleasant and enjoyable. This exotic hub will always be the great introduction to this city. 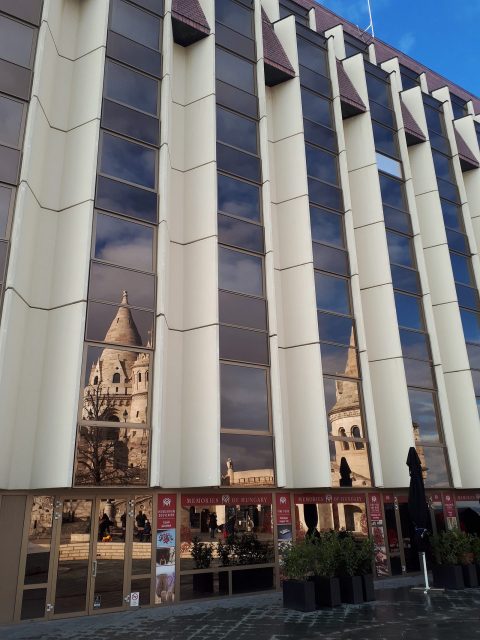 As for me, it’s good to be reminded from time to time how splendid this entire river city is, especially when looking out from one of the coned tower tops. And to recall how my time here really began. I can only compare this to reminding the Parisians how splendid the Eiffel Tower is. Sometimes one can be forgetful or take for granted these immediate, invaluable things before us.

And so, after seeing all the city’s main sites, in some cases over and over again, often enough by chance, as well as taking to many backstreets, it may well seem I have reached full circle. So the inevitable came to attend to my long overdue tribute to this hub, and make a return to where it all began.

There was one exceptional difference to last time: the tour guides and the crowds this January were obviously far fewer. Not even the bogus individuals who in their heyday were once so willing to catch your eye and lure you and your loose change into a game of “fast-ball”. This gambling game consists of three cups and a small ball that the operator rapidly moves around by hand on a small collapsible table (in case the cops come) in the more discreet alleyways of the Castle promenades. Even they have cleared off.

Apart from the locals who live in this privileged locale (and a few visitors still permitted to book in at the otherwise closed hotels, perhaps?), it seems this peak is having a rest until further notice. Certain amounts of construction work are now taking place, although nowadays life there is eerily quiet. It still resembles the French Riviera but this time on a Sunday morning, due to ongoing virus reasons.

Well, this remains a wonderful and bewitching landmark and one of my favourites. And how I would have loved to stay a little longer but the clock struck 12, my “pumpkin-time” on this particular day and I had to leave. I then proceeded down the hill, leaving this extraordinary locale and returning to all-things-familiar in my own neighbourhood soon afterwards.