A city with two alphabetical identities

Written by Alexander Stemp
Novi Sad, known as Újvidék in Hungarian, is a vibrant city 300 kilometres south by road, river, rail and bicycle lane from Budapest. It's located in the central heart of Voyvodina, a flat, agricultural province in northern Serbia and 75kilometres from Belgrade. For where to begin, this university city comes in three variable parts: the downtown centre, the River Danube and the Petrovaradin Fortress. All are in close proximity and light walking distance of each other.

With a diverse population of not only Serbs, this city with its population of some quarter of a million also comes with Hungarian, Croat, Slovak and Roma minorities. The centre has a number of noteworthy buildings, mostly in Baroque style, together with some excelling museums and art galleries. Novi Sad is a very lively locale with a large number of students, and it’s clear to see there is an energising all-year-round café-bar scene.

As of this year, a visit is particularly worthwhile. This city that is also known as the Serbian Athens has been given a European Capital of Culture award, and thus will host plenty of artistic events throughout 2022.

Over the years the main feature has been the Petrovaradin Fortress. The various arrays of elegant and decorous buildings are, by and large, remnants from the pre- and post-Austro-Hungarian times. But more recently, Novi Sad has become best known for its annual Exit Music Festival, which began as a student movement for peace and freedom in the Balkans in 2000.

And should the virus permit, or preferably disappear, this summer thousands of international revellers will return and proceed to the fortress for the four-day extravaganza. Nowadays Exit is up there with the Glastonbury and Sziget festivals. It delivers big headliner acts such as the likes of Guns ‘n’ Roses, The Prodigy and, in particular, an old favourite of mine from London, Madness, who I saw there in 2009. For this and more, see  www.exittrip.org

The main central hub of Novi Sad is the Trg Slobode (Freedom Square), which is a spacious plaza and obvious meeting point. On one side is the neo-Gothic Catholic Church of the Virgin Mary and on the other is the neo-Renaissance town hall. Also within these immediate confines, consisting of coffee shops, bakeries and so forth, is the tourist information bureau. A little further on is the modern-day Serbian National Theatre. 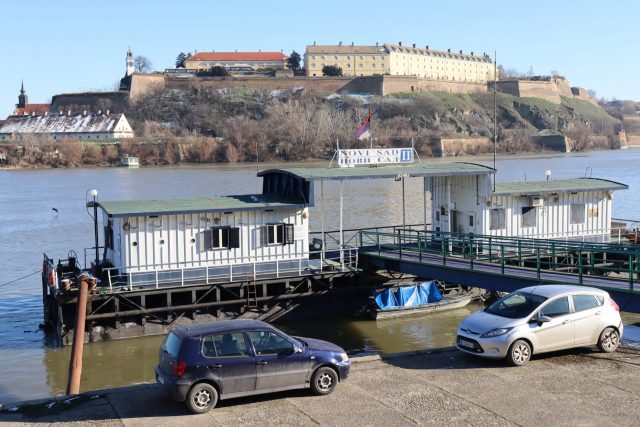 Beyond this point and heading eastwards is the bustling Zmaj Jovina lane that, together with the adjoining bar-filled alleyway of Laze Telečkog and the Dunavska promenade, form Novi Sad’s central theme for 24/7 eating, drinking and partying. Further on is the recommended Museum of Voyvodina, founded in 1847 and consisting of two buildings. There is a local archaeology and ethnography section holding a permanent exhibition of past and present Serbian culture, then follows a commemoration given over to the two world wars.

Proceeding from this immediate area in almost any direction is the Danube riverside and eventual Petrovaradin Fortress, which clearly defines the skyline. For those familiar with Budapest, this atmospheric river hardly needs any introduction. Various boats, ships and tugs ply the dreamy Danube as it flows directly through the city. The tourist port, near the main Varadin Bridge, also within this immediate pedestrian-friendly area, welcomes these vessels as they operate locally as well as head off for Germany or the Black Sea.

During the summer, tourists and locals make their way to the Strand, a sandy beach area on the river’s northern part. Needless to say, it’s round-the-clock pleasure time there too.

Regrettably, in 1999 the city lost all its bridges due to a NATO air strike. Underneath the Varadin Bridge is a memorial to commemorate the bombing, plus a tribute to citizen Oleg Nasov who lost his life there during the attack.

But when over the bridge on the southern shoreline side, and should time prevail for a change of scenery, there are great views. It’s a simple matter to make one’s way, though proceeding up some rickety steps, to the impressive and eloquent fortress, which dates to the 18th century. When there, take a light stroll around the refined, yellow-washed castle interior buildings, which house museums, coffee shops, restaurants and so forth. Also check out the elegant but strikingly humorous clock tower and pose for a selfie at this very characteristic and quintessential landmark.

Informally known as “The Drunken Clock”, when one looks closely it is apparent that the two clock hands are placed in reverse order. However, the clock still works and delivers the time – sort of – if one is quick or clever enough to unravel its quirky secret, when, for example, 10 past 10 and 10 to 2 mean the same thing. 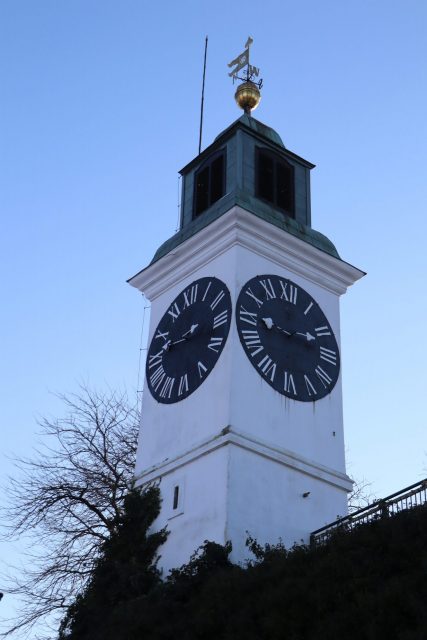 When you have recovered your wits from working out this telling-time mystery, make your way to the fortress museum to discover the history of both this immediate area and the city. There is also an impressive portfolio of 18th– and 19th-century applied art.

Certainly there is plenty to see and do over a weekend in Novi Sad. But should time allow, make your way to the extremely serene Fruška Ggora National Park, some 20 kilometres south of the city. Orchards and vineyards decorate the route and hiking trails lead to atmospheric monasteries.

On the eastern fringes is the delightful small town Sremski Karlovci, smaller but similar in ambience to Szentendre. This national treasure makes a short but splendid outing and its Four Lions fountain is enchanting. A tourist information office provides hikers with maps of the immediate area. There are wine cellars and a quaint bee-keeping museum too.

When it comes to local cuisine, there is much on offer regardless of budget. Typical Serbian food to be discovered includes traditional dishes such as ćevapi, burek, kajmak, kiseli kupus, kiflice and pasulj, as well as fish dishes, local cheeses and charcuterie. Bakeries, restaurants and farmsteads arrange and deliver fresh produce from area farmers, and vintage wines come from the Fruska Gora vineyards and elsewhere. Pastry shops serve specialities such as layered “torta” cakes made from ground nuts and cream. A typical dessert often includes raspberries, and the family-friendly Dunavska Street is home to many ice-cream parlours.

Finally, when it comes to personal impressions I find Serbia is intriguing and should be approached with an open mind. It seems to me that there is still plenty of Yugo-nostalgia in full flow among the older generations, while I sensed that the younger people are generally happy to move on and join the rest of Europe. Another thing which was strikingly evident is tht Novi Sad uses both Latin and Cyrillic alphabets.

Getting to Novi Sad can take longer than expected. The Budapest to Belgrade train service is redundant until further notice. Plans to rebuild this line are ongoing. Therefore, it’s either bus or car (or bike along the Number 6 cycle lane). The buses need to be booked in advance. Driving is straightforward enough as it’s main roads all the way, with long queues at the border in between.

It took me six hours each-way by car. Both journeys came in three parts. First, it was a pleasant enough two hours’ drive along the M5 in the Szeged direction and to the nearby border. Then it was a two-hour wait and sluggish crossover until I was allowed to pass through. This was rounded off with another two hours on top before I found my hotel. And basically vice-versa.

But despite the arduous effort to get there, the rewards finally came.