Written by Alexander Stemp
Should you be in need of a lively day out, then how about an “all bridges” city tour in one go? The only real instruction to fulfil this exclusive matter is, follow the pleasant and well-laid-out Number 6 Duna shoreline cycle lane all the way. From one end of the capital to the other it's roughly a 20-kilometre jaunt covering nine main bridges, plus additional bridge-crossing diversions, with blissful scenery all the way.

To accomplish this successfully, I suggest taking to the Buda side. The Pest side is also good and sometimes better in parts, offering greater views of the Buda Hills, Castle District and Citadella. But further on it’s more congested and the scenery is far less interesting.

To begin, I also suggest starting off from the northern-most Megyeri Bridge, the newest of the nine having opened in 2008. This construction is roughly half-way between the central city and Szentendre, and makes a great start with Luppa Island on one side, a sleepy residential area, and the lofty Buda hills on the other. Beyond here it’s wide-open spaces all round.

Getting to this starting position requires taking the train from Nyugati to Újpest, then cycle the remaining part, parallel with the arduous Váci út, and turn off at the number 2 Dunakeszi road until completion. Or take the Buda-side HÉV suburban line route from Batthyány tér to Budakalász. Both are awkward and demanding but the rewards for achieving this will be far greater.

When finally at the Megyeri landmark, it’s difficult not to be enamoured by the scenery, as I am each time when there, before making my flow beside the downstream river in the sun-facing southwards direction. In the general quiet and calm of the low-key Békásmegyer hub of northern Buda, alongside with the elegance and prominently tall and standoffish poplar trees, it all makes very pleasant bicycling. This is the most sedate part of the tour until one arrives at a boathouse, where things liven up with local people taking to rowing in this immediate and unruffled area.

A short while later there is a no-frills consortium of outdoor Balkan-style buffets and bars that generally comes to life when promising weather allows. It’s the real thing when strolling barefooted on the sandy shoreline, taking a possible dip in the water, sitting on a log and really taking in the immediate riverside view before being served up either a traditional lángos or a fortifying plate of real fish and chips, burgers and ice-cream, which prevails during the day at this family and bike-friendly locale. Then it’s more a case of beer drinking and some form of outdoor entertainment when the sun goes down over this very mellow and least commercial part of the city. 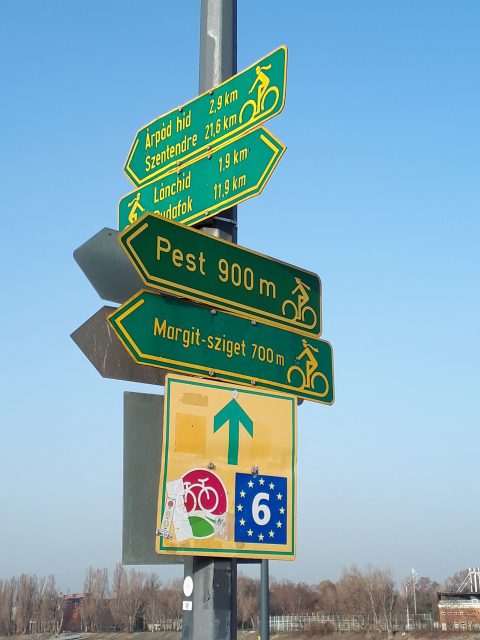 Moments later one arrives at the impressive Újpest Railway Bridge, which connects with Nyugati and Esztergom, and is also worth exploring. When half-way across, one can just about pick out the main city centre on the far-off horizon. Should you go as far as the eventual Pest side, there is access to the Újpest suburb. Before that, there is the unkempt Nep Island with its smallish, tucked-away shipyard, outdoor bar, a few holiday huts and an unexpected goat farm. So when ready, make the return to the Buda side and continue with journey.

A short while later one approaches Óbudai Island, which is host to the internationally renowned Sziget Festival. Beyond that point it is general parkland, as well as an authorised closed-off section. Still, it’s thrilling to cross the one and only bridge, called the “K-bridge”, onto this island, where some of the world’s musical greats also crossed. In my case I tripped the light fantastic when I saw the best of British, Madness, who played in front of thousands of other revellers several years ago.

When done with staring into this empty field otherwise, then it starts to get busy. The traffic leading to Árpád Bridge becomes most apparent. With this bridge finally in line of sight, you will notice beforehand another discreet one called the Hájogyári híd (Shipyard Bridge), which is generally off limits to public access. On the one occasion I cycled over, I was sent back by a security guard.

Moments later one arrives at Árpád Bridge and central Óbuda. It’s worth taking a brief look at this picturesque locale. However, it’s not worth cycling over noisy Árpád Bridge other than to gain access, for another time, to the back way to Margaret Island. At the immediate Pest end is the equally busy Váci út, which is also at a crossroads with the heavy-going Hungária körút.

So once again, turn attention to the Buda side and follow what’s obvious and more pleasing. You may notice Kolosy tér in passing too. Soon you will come to the spectacular Margaret Bridge with a backdrop of the Országház, or Parliament House, which at this point is a little further on. When finally there, take in what’s clearly quintessential Budapest in an all-in-one swoop from this respectfully famed and splendid landmark and prepare for more.

Half-way along Margaret Bridge is the main entrance to Margaret Island. Further on is downtown Pest. Whilst at the Pest end, it’s worthwhile to cycle alongside the Number 2 tram-line to the monumental Kossuth tér, outside the Országház. Really, this neo-Gothic-style structure with its Renaissance dome is a wonder in every sense.

Also whilst there, the glorious Buda-side Castle District then also comes to prominence with a splendid panorama. When accomplished, return to the Buda side of Margaret Bridge, as the forever faithful Number 6 cycle lane awaits your return. From there onwards, few explanations are required other than what’s obvious, as it’s further glorious sight-seeing from bridge to bridge all the way.

Have restful fun when at the pleasant Batthyány tér bus terminal area with the Parliament Building now in clear view from across the water. Next along this stairway to bike-lane heaven is the charming Lánchíd/Chain Bridge, also distinguished by its four symbolic lion structures, which clearly adds to the pomp and splendour of the city centre. Once again, have a stroll to the Pest side. When there, take note of the overwhelming view of the National Gallery and the overlooking Citadella. When done, return to Buda and proceed further for more marvels.

Cycle under the Erzsébet/Elizabeth Bridge and further on there is a steep, rocky terrain. A little further towards the Szabadság/Freedom Bridge is the delightful and unusual Gellért Hill Church Cave. Take a respectful look inside and have a rest in real peace and quiet. Then immediately facing is the renowned Hotel Gellért. Have afternoon tea or a swim at its deluxe spa bath (when it re-opens) before continuing and leaving the main tourist features behind.

Beyond this point, although still very splendid when passing the various university departments, it becomes clear that this route now leads to the lesser-known southern regions, via the Petőfi and Rákóczi bridges. When at “end stop” Rákóczi take to the retro-futuristic bridge itself for one last incredible, all-in-one panoramic view of the entire central Budapest, with the dreamy Danube and any ships, tugs and other vessels that may be passing. This now ends the nine bridges tour.

But if you still want more, there are another two bridges leading to the little-known Csepel Island close by. They are called the Kvassy Bridge and the Gubacsi Bridge, which also relate as much to the city and are accessible only from the Pest side with an additional 10-kilometre round trip on top. The other bridges further on are not so relevant to central city life and are too far away at this time to consider venturing to. 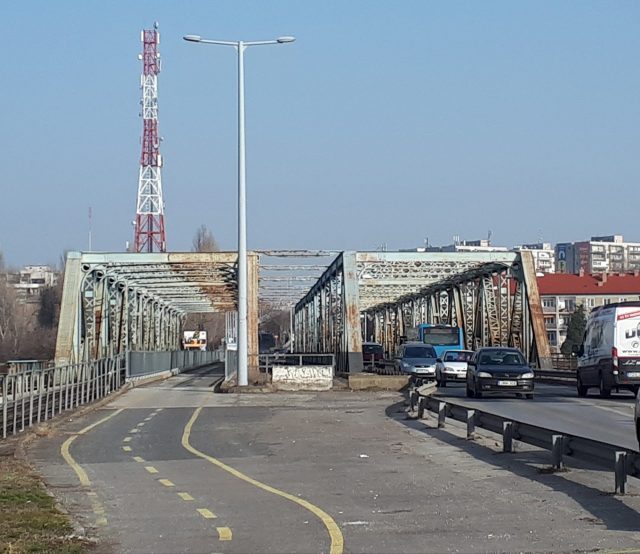 Never mind obvious cosmetic contrasts, it’s worth seeing the modest Kvassy and the chunky Gubacsi ones too, which hardly ever get a mention. They are rightfully photographic souvenirs (without the tourists) too – only when familiar with these last two additions can you make the real claim that you have been to all central bridges within this riveting city, thus increasing the new and unexpected total from nine bridges to eleven. Few people realise this.

Then for getting home after this bridge-to-bridge extravaganza, some older tram carriages have special bicycle compartments. Look out for green bicycle signs displayed on their windows. You may have to wait longer than expected for one to arrive, but they are very welcome at the end of what will be for sure a most exhilarating and memorable day.