An unexpected twist in soberness at the Shakesbeer bar

To beer or not to beer

Written by Alexander Stemp
The header could also be “two beers or not two beers”, depending if one is either “a drunken man or a drowned man”, as partly quoted in William Shakespeare's “Twelfth Night”. As this comedy charmer continues its traditional spin on the 12th day of Christmas worldwide, and here in Budapest too, this also comes in addition with a host of other universally popular plays that only require light or minimal introductions.

But should you be searching for something as intellectual from the great man here in the city, don’t make the “Comedy of Errors” blunder I recently made when, by chance, I came by the questionable and not so serious Shakesbeer bar, on Lövőház utca in backstreet Buda.

I think everyone can agree, this impulsive word-play is very clever, and inspired me to find out more. Although I wasn’t expecting an elaborate and mystical stage set as I stepped inside this small, laid-back saloon with its mellow atmosphere, I was expecting a little something to justify this prudish bar’s name. Or else why isn’t it called something far less extraordinary?

Had there been advertised Shakespearian events taking place over round-table talks there, this would have satisfied me and perhaps I may have joined in. But there was no society present, nor likely to be. Nor were there any Hamlet-esque skulls on display. The list of what could have been with any obvious stereotypical representation continues, as this optical illusion of a drinks bar has about as much Shakespearian atmosphere as the English comedy “Only Fools and Horses”. Therefore, another header, “To deceive or not to deceive”, follows.

Maybe I was being far too hopeful. But at least I was not demanding a fearless and dashing Romeo, nor a stunningly beautiful and mesmerising Juliet to provide the service. This would be too much to expect from anywhere that is not related to Stratford-upon-Avon. And certainly here in back-street Budapest, unless the Budapest-based English-language Shakespearian Madhouse Theatre Company springs into action. As then and only then would this sleepy locale turn into a Shakes-beer-drinking event.

But beyond wishful thinking, there was one slight hope. Perhaps the owner is a Shakespearian buff? Or else how did this inherited name come to be?

At least I was given my “Measure to Measure” drink and my “As I like it” pack of crisps. Then, with some haste, I made my way to the “Midsummer Night’s Dream” terrace and posed for a souvenir selfie of this illusive place. And who knows? I may be able to dazzle my online friends and family with my hidden cultural depths and surprising intellectual talents. Although this “Much Ado About Nothing” mirage was amusing, I wonder who else has been caught out in this same way?

Eventually, as I finally pulled myself together and gathered my senses, I took my leave, as it was time to round off this story by searching for something far more serious. Fortunately, there is a statue of this great scholar by the Marriott hotel on the Duna korzó promenade in central Pest. 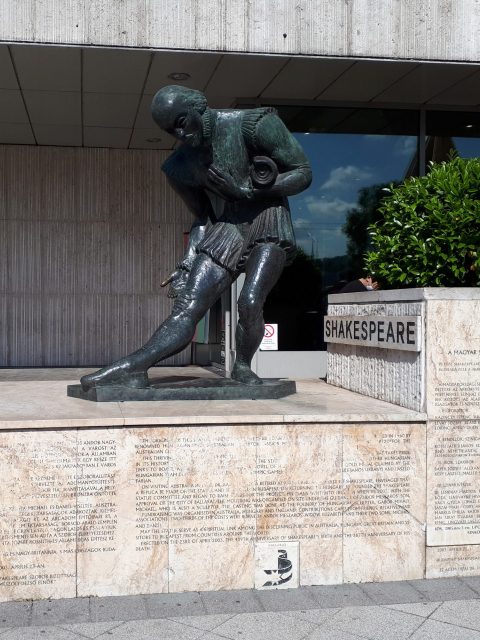 Finally, in addition to the abundance of Shakespeare found in theatres in English and Hungarian and in international book shops throughout the city, check out the very humorous and telling Shakespearian Madhouse Theatre Company as found on Facebook. Hopefully they will return to the spotlight very soon. Then, if I get a chance to meet them, I will inform them of their next big task.