Written by Alexander Stemp
Women have pushed themselves to the forefront of the ongoing opposition protests against Belarus President Alexander Lukashenko both at home and abroad, and a “Women are Power!” demonstration was held in support outside Hungary’s Parliament Building on October 10.

Belarusian and non-Belarusian women alike, alongside a few men, staged the latest peaceful rally against the allegedly rigged August 9 election in which the incumbent Lukashenko, often described as Europe’s last dictator, was re-elected to a sixth term in office, with official results crediting him with a landslide 80% of the vote and extending his rule that began in 1994 for a further five years.

Opposition candidate Sviatlana Tsikhanouskaya claims to have won a decisive first-round victory with at least 60% of the vote, and she called on Lukashenko to start negotiations, before fleeing for Lithuania after threats from the authoritarian regime.

The “Women are Power!” demonstrations have become a global event, and the Budapest protest took place in unison with many cities worldwide. The peaceful demonstrations serve as a message of hope to the Belarus nation, where ongoing protests every weekend result in arrests by security forces, using water cannon and beatings. At present there is no turning back in the struggle.

It is distinctly clear that women have played a euphoric part in this historic matter. Tsikhanouskaya is steadfast that she was voted the rightful president. Many other women, too many to mention, remain at the forefront of the Belarus opposition. 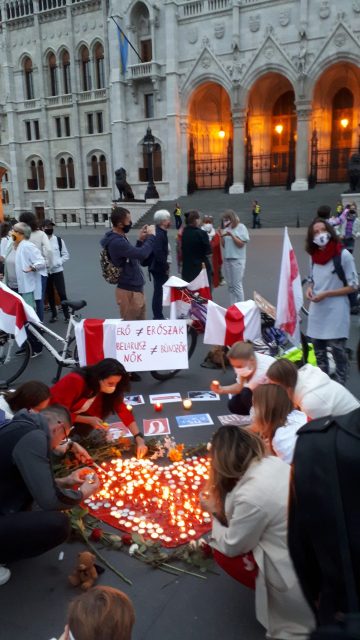 These include the gracious but strong-willed musician Marija Kalesznyikava, an Annie Lennox lookalike, who continually took to the front line before being kidnapped by the authorities and taken to the Ukraine border. En route she tore up her passport and managed to remain in Belarus, but was imprisoned for her beliefs. Worldwide appeals have been unable to secure her release.

This weekend, while women marched peacefully in Budapest and elsewhere, scores of opposition protesters were again detained in Minsk and other Belarusian centres after clashes with police. Such events have become occurred in the country every weekend since the disputed election.

In Budapest, much as in London, Paris, New York and elsewhere, there was an assortment of passionate speeches highlighting the Belarusian plight, and the women’s role in past, present and future happenings. All were read out in English, Belarusian and Hungarian to a loyal gathering who had been asked to bring flowers and candles.

The speakers were Anna Donáth, Member of the European Parliament and part of the Renew Europe group; Kata Keveházi, President of the JOL-LET (Well-being) Foundation; Olga Zubkovskaya, the event organiser, who discussed “Women and politics”; Dorottya Rédai from Labrisz Leszbikus Egyesület (Labrisz Lesbian Association); and Alesia Oravcova, who read out a poem by Larysa Hienijuš about a Belarusian woman poet prosecuted and imprisoned during the gulag era. This was the finale before the demonstration rounded off with a drum crew called “Rhythms of Resistance”, who cheerfully blasted the immediate area.

Despite the camaraderie and much global support, plus high-profile meetings between Sviatlana Tsikhanouskaya and various European Union officials, the dangers are still there. Russia is yet to present its final hand in the matter. And only last week an imposter impersonating Tsikhanouskaya appeared on Danish TV. But there is optimism that freedom will prevail.