Windows into the challenges of today

Written by Christopher Osterberg
With international travel heavily locked down, the 13th Budapest Architecture Film Days from March 4-13 will take viewers to such places as San Francisco, Copenhagen, Havana, London, Marseille, Dubai and many other locations, all from your comfy chair.

The motto of the online event is “reconnect”, its main themes including restarting and reconnection: reuniting the individual with the community, empathy for others, solidarity, a more conscious and sensible relationship with nature, travelling without emission, and sustainable development.

The showcased films raise questions, argue, delve into problems, urge people to take a stand while, as an ensemble, they make it clear the challenges that populations face today do not exist on their own but are closely intertwined.

The 17-film festival can be watched at tavmozi.hu. The opening film, “Making a Mountain”, follows what happened when the firm BIG won the architecture competition for a large waste-to-energy plant with a ski slope on top in Copenhagen in 2011. A camera followed the process from the tentative beginnings of what became known as a visionary project that combines waste management and infrastructure with spectacular architecture and a recreational urban space in the Danish capital.

“Havana, from on High”, made in 2018, shows a secret village nestled above a decaying district of the Cuban capital, hidden from the bustle of the streets below. The chronic shortage of housing in central Havana has pushed the city upwards, where life spills out onto the rooftops. These makeshift houses are inhabited by resilient and remarkable residents. The rooftop dwellers have a privileged point of view on a society in the process of major transformation after more than 60 years of the revolutionary government. 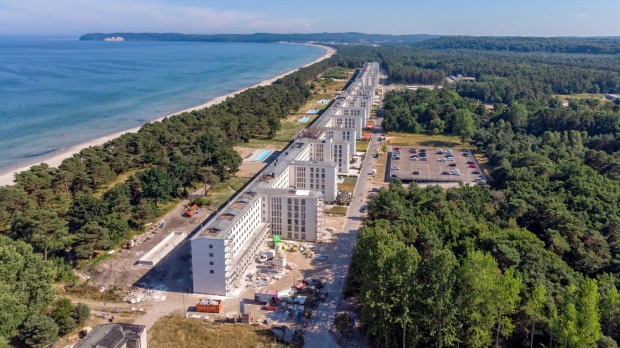 “Inside Prora”, from Germany, shows what is considered to be the longest building in the world, known as the “Monster by the Sea” and the “Colossus of Rügen”. Planned as a seaside resort during the National Socialist era in Germany, it was transformed after World War Two into one of the largest barracks in the German Democratic Republic only to get abandoned after the reunification of Germany. Nowadays hotels and holiday apartments are emerging in the heritage-listed building on one of Germany’s most beautiful beaches. Prora is evolving into a modern Baltic seaside resort. The film explores the place and reveals its various historical, architectural and psychological layers.

The documentary “Golden Age” opens the doors to the Palace, a retirement home of the kind most people have never seen before, in Miami. Gildings, ostentatious chandeliers, marble floors; like a cross between a luxury hotel and an Americanised copy of Versailles, the place is presented by its developers as the most beautiful retirement home in the United States.

Seventeen films will be shown in all, in English and other languages with English subtitles. The full programme can be seen at https://filmnapok.kek.org.hu/en/

The organisers say: “2020 turned the world upside down completely. Our 12th festival edition, in March 2020, was the last major cultural event in Budapest, and none of our films could have predicted what happened after that. The world closed off, services shut down and, as hospitals slowly filled with patients, we were trapped inside four walls (and in front of our screens).

“The pandemic drew even sharper attention to a number of phenomena that are regularly addressed at the Budapest Architecture Film Days. Unbridled urbanisation and the destruction of natural habitats mean unprecedented consequences for all of us.
“Rising unemployment and expiring moratoriums have put many families at the risk of eviction. Tourism-dependent cities are facing serious economic challenges. Inequalities between wealthier and poorer neighbourhoods are now more pronounced than before, increasingly isolating not only groups with different social statuses, but also different generations.
“At the same time, the lockdowns also accelerated a number of long-awaited positive social transformations that our audiences have already encountered in our films. Urban green spaces and green technologies have become more valuable; air quality has improved in many cities as a result of curfews and less travel.
“City leaders, often in defiance of their own governments, have introduced a range of sustainable transport solutions and democratic decision-making processes.
“Solidarity networks matured in social movements have greatly contributed to the survival of the pandemic: cohesive neighbourhood communities, charitable food distribution and other supportive actions have helped the most vulnerable groups to survive the crisis.

“In past festival editions we have shown an accurate picture of the most important problems and opportunities of architecture and the transformation of the city. Now comes ‘reconnect’, the motto of the 13th Budapest Architecture Film Days.”