Written by Christopher Osterberg
Is there any doubt that Christmas is the most wonderful time of the year? And from the Great Lantern Festival of the Philippines to St. Nicholas’ evil accomplice Krampus roaming Austrian city streets frightening kids and punishing the bad ones to Norwegians hiding their brooms because they once believed that witches and evil spirits came out on Christmas Eve looking for them to ride on, many countries have their particular Yuletide traditions. Hungary too…

The Christmas holiday is the best time of the year for Hungarians to honour their roots. In this season of celebration, family traditions have been shared for generations, and listed here are the most popular that pass down through the years. First, to get things off on the right footing, note that “Happy/Merry Christmas” is “Boldog Karácsonyt” or there is “Kellemes Karácsonyi Ünnepeket”, meaning “pleasant Christmas holidays”.

The countdown to Christmas is marked by traditional advent wreaths. These beautiful holiday centerpieces feature four candles, representing faith, hope, love and peace, nestled in a bed of pine branches and ribbon. The evergreen branches remind us of life. A candle is lit each Sunday leading up to Christmas, with the final candle lit on Christmas Eve, which is a very important time and is called “Szenteste”, meaning “Holy evening”. People spend the time with their family and decorate the tree.

In Hungary the tree is decorated on Christmas Eve. Traditionally children are not allowed to see the tree until they have been given permission by their parents, marked by the ringing of a bell. It is common practice for grandparents to take the children for a walk while the rest of the family decorates the tree. Upon their return, the family unveils the “surprise”, claiming that it was brought there by angels.

Hungarian Christmas trees are decorated with unique and beautiful ornaments. Since the 19th century it has been Hungarian custom to decorate the holiday tree with “szaloncukor”, a sweet fondant often covered in chocolate and wrapped in shiny coloured foil. Other decorations include shiny glass ornaments and handmade decorations embroidered with traditional Hungarian designs.

Children also hope to be left presents under the tree on Christmas Eve. They’re told that the presents are brought by Jesus, who is often called “Jézuska”, a cuter version of “Jézus”. The youngsters wait outside the room containing the tree until the bell rings, and they can enter.

On Christmas Day itself, people visit their families.

Decorating the tree on Christmas Eve is typically followed by a big family dinner that is the main Christmas meal. Traditional Hungarian holiday meals contain a spicy fish soup called “halászlé”, which translates to “Fishermen’s soup”. This bright-red soup was originally prepared over an open fire by fishermen along the Danube and Tisza rivers, and is made with hot paprika and carp or other freshwater fish. Stuffed cabbage, or “töltött káposzta”, is another holiday delicacy. The cabbage leaves are filled with savoury rice, minced pork meat, onion, garlic and other herbs and – of course – paprika. These delicious rolls are served with a generous helping of sour cream. The Midnight Mass service attracts many Christians after their Christmas meal.

Poppy seeds (“mákos”) are believed to bring good luck and fortune in the new year. This is why poppy seed desserts are a common feature of the holiday season. One of the most famous of these is “mákos rétes”, a rich poppy seed strudel. These poppy seed rolls have two traditional filling varieties: poppy seeds, symbolising richness and good health, or walnuts, which were believed to protect against bad luck. Another delicious poppy seed dessert is “mákos guba”. This bread pudding sprinkled with poppy seeds and drizzled with sweet honey is a traditional treat used to reward children for good behaviour. 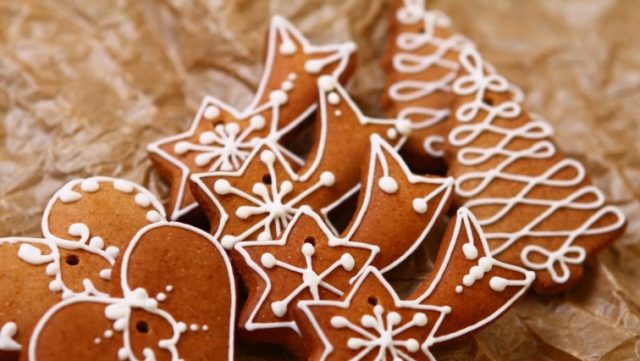 “Mézeskalács” (pronounced may-zesh-koh-lotch) are beautifully made Hungarian gingerbread cookies. Unlike traditional gingerbread, these sweet treats are infused with honey, giving them a mild flavour and light texture. Once out of the oven, each cookie is meticulously decorated with royal icing piped into floral patterns (mezőségi) as well as cross-hatched lace, animal designs and Hungarian aphorisms.

Celebrated on December 13, Luca Day marks Hungary’s annual Winter Solstice. As the shortest day and longest night of the year it was also the darkest, and has traditionally been associated with witches and spirits. The Luca calendar marks the twelve days between Winter Solstice and Christmas, which were spent practising a variety of folk traditions to ward off evil.

One of Hungary’s most famous holiday folk traditions is the carving of the Luca Chair. Made of nine different types of wood, the Luca Chair was to be carved by Christmas Eve. The hitch: only one carving was permitted per day. Once the chair was complete, its maker would carry it to Midnight Mass, where it would give him a high enough vantage point to spot witches in the crowd. A Hungarian saying that lives on from this tradition is “Készül, mint a Luca széke”, or “You are preparing it as slowly as a Luca Chair!” 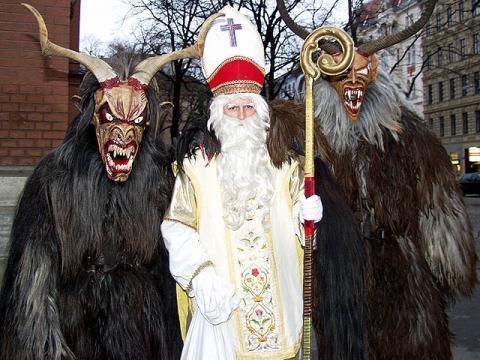 Hungarian children receive gifts twice during the holiday season. Apart from Christmas Eve, on the eve of St. Nicholas Feast Day, which is celebrated on December 6, they are visited by Saint Nicholas, or Mikulás. That night children place newly polished boots or shoes on their windowsills to be filled with small presents by Mikulás and his helpers. If you’ve been good, you will wake to find a boot filled with oranges and mandarins. If you’ve been naughty, Mikulás’ sidekick Krampusz (a mischievous devil) will have left a bundle of birch sticks (“virgács”) instead.

Presents might also be brought by Télapó (Old Man Winter).

The Luca calendar was also a time for love spells. To forecast the name of her future husband, an unmarried woman would write twelve names on small scraps of paper and burn one a day until Christmas. The name on the last piece of paper was believed to be her future husband’s name. Alternatively, the scraps of paper could be put into dumplings and then cooked; the first dumpling to rise to the surface of the boiling water would contain the name of the woman’s husband-to-be.

Much like caroling, “regölés” or “singing good wishes” is a Hungarian holiday tradition. From December 26 until New Year’s Day singers called “regősök” travel from house to house singing songs of good wishes to their neighbours. Historically this was a custom of singing about the magic of nature, greetings, wishing for abundance, drawing couples together and collecting donations. These Hungarian carols can sometimes still be heard throughout the holiday season.

This year the Christmas markets are last and least, thanks to the coronavirus pandemic. Normally a highlight of the holiday season in Budapest and elsewhere in the country, the most celebrated would usually be at Vörösmarty Square. Named one of the best Christmas markets in Europe by Conde Nast Traveler magazine, this world-renowned holiday market features over 100 wooden stalls selling traditional Hungarian handicrafts. Folk music and the scent of mulled wine fill the air, while open kitchens serve holiday comfort food such as “nokedli” dumplings, “lángos” deep-fried flatbread and “kürtőskalács” (chimney cakes). It’s no surprise that the Vörösmarty Square Christmas Fair and the nearby one at St. Stephen’s Basilica normally attract thousands of visitors every year – except 2020, when they have been cancelled in the interest of public health. Hopefully 2021.