Orbán urges risky people to avoid gatherings and keep to themselves

‘This is no time to be stupid’

Written by BT/MTI
Prime Minister Viktor Orbán has urged those displaying symptoms of COVID-19 to self-isolate. No form of defence can succeed without voluntary participation from the public, and it is primarily "a country's level of intelligence rather than measures enacted by the government" that determines the quality of response to the virus.

Recent COVID-19 clusters identified in Pápa, western Hungary, and Mezőkövesd in the northeast emerged because people with coughs and fevers went to places where many others gathered, Orbán said on public broadcaster Kossuth Radio. The operative board coordinating Hungary’s response to the pandemic is constantly at work, and soon the special unit investigating coronavirus clusters will be seen isolating any groups that may be infected, he said.

The prime minister underlined the importance of the National Consultation launched in connection with the coronavirus and rebooting the economy, saying it would help the government enact measures that are supported by the people. So far more than 1.4 million people had filled out the survey, “a very high number” considering how many people went on holiday this time of year. 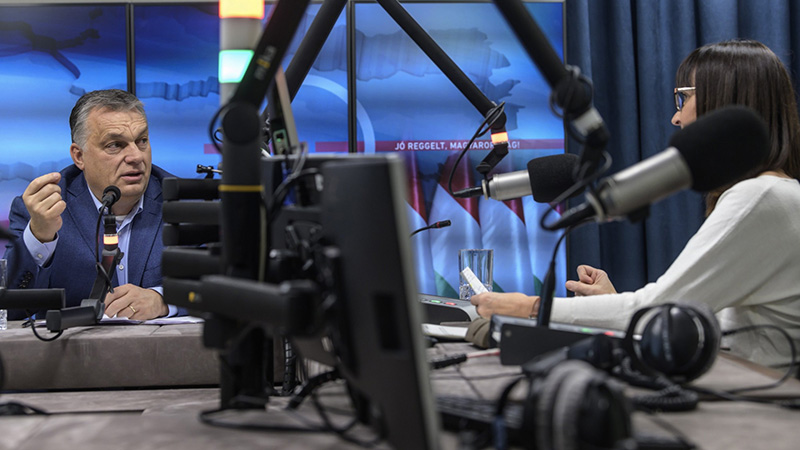 Orbán urged the public to be “responsible” with their days off from work. The government had “set a good example” by cancelling the fireworks for the August 20 national holiday as it would have posed “a risk we couldn’t take”.

He asked those travelling abroad to favour neighbouring countries, of which Slovakia, Austria, Slovenia and Croatia are currently considered safe amidst the pandemic.

Hopefully the world would handle a likely second wave “in a more organised manner” than it had the first one, when “countries would grapple for protective equipment at various Asian airports”.

Hungary has made the necessary changes to its health-care sector that give it a better chance of putting up “a near-perfect defence against the pandemic” in the event of a second wave, Orbán said. He had instructed the minister responsible for health-care to give a precise professional opinion on the first coronavirus vaccine to be put in use.

Hungary has already “posted an order with the EU” for 5 million doses of a coronavirus vaccine when it is developed, he said.

Fidesz won the first of its three consecutive election victories in 2010 by promising one million jobs, Orbán noted. In eight or nine years more than 800,000 jobs had been created, “a world record”. Families’ livelihoods should be based on work and not benefits. “We went bust under leftist governments because they encouraged and enabled” an approach counting on unemployment and other benefits by the jobless.

Regarding migration, Orbán said all illegal migrants attempting to enter Hungary pose health and “biological” risks, which is to be averted “at all cost”. It would be wrong to “paint all migrants as biological bombs” by conflating migration and COVID-19, however “some are exactly that”. Until those carrying the virus could be identified, all illegal entrants should be treated as potential sources of infection.

“This is too strong a statement for social justice warriors … but Hungarians have to think about self-defence,” Orbán said. He had asked the interior minister to make sure the armed forces and police continue to take forceful action against all attempts of illegal entry as it now poses health risks, too.

Regarding the pop music industry, to which the government recently allocated HUF 2.12 billion to offset the losses incurred during the pandemic, Orbán said he saw the sector as a part of Hungarian culture. The funds should be decided upon by “people from that world” to avoid dissatisfaction despite government support.

The decision by Ukrainian health authorities to classify Hungary as a “red” country for coronavirus risk is “professionally unfounded and ill-considered”, the Transcarpathian Hungarian Cultural Association (KMKSZ) has said. Ukraine has also classified Slovakia and Poland as “red”, but all three countries are regarded by the World Health Organisation and other prestigious health organisations as having more favourable epidemiological statistics than Ukraine, KMKSZ noted. It said the decision to move Hungary into the high-risk category will put hundreds of thousands of Ukrainian citizens at a disadvantage, and could harm relations between the two countries’ border regions and cause significant economic losses for Ukraine. KMKSZ called on Ukraine to revisit the decision and consider internationally accepted factors when gauging the risk of coronavirus infection in the various countries. “We consider the adherence to the principle of reciprocity important even in this transitional period,” KMKSZ said, noting that Hungary and Ukraine have agreed to allow each other’s citizens living within a 30-kilometre radius of the border to commute without undergoing quarantine. The Ukrainian government updated its classification of several countries on August 1, moving Hungary, among others, from “green” to “red”. Ukraine will assign a “green” classification only to countries that have not experienced a rise of over 30 percent in the number of registered coronavirus cases, and ones where the number of infections per 100,000 people is not higher than in Ukraine.