The ugly, the bad and the good

The rise and occasional fall of tower blocks

Written by Alexander Stemp
Tower blocks hardly need an introduction as they generally speak for themselves. (*”Except to the eye of love, one tower block is much like another”). And are easily found whether you like them or not. At least for these times, they are here to stay.

Later in years, to create better marketing campaigns for these box-shaped locales, architectural designs became more striking and technical, regardless if fanciful or not. The ranges within recent-time tower block trends vary from Sustainable, Neo-futurist, High-tech, Deconstructivist, Digital, Streamline, Novelty, Critical, Regionalist, Vernacular, Neo Art Deco, Cylinder, Brutalist, Neo-historist, Revivalist and so forth, as seen in and around Budapest, Europe and elsewhere today. But regardless of academic approach, general quality or final opinions, many still consider tower blocks an intrusion, a harsh blot on the landscape, without too much further thought.

They are not just a symbolic recent-day phenomena or a socialist gesture. Even so, earlier on at the height of communism when the blocks first came on the scene, aesthetically they must have taken some considerable time to get used to. Especially when comparable to the small, sedate, same time period “Kádár cubes”, a simplistic house and garden affair often found along the sleepier lanes of Hungary, and seldom no higher in proportion than an average tree.

Nowadays, although still generally frowned upon, as one-finally-gets-used-to-them, tower blocks are more accepted. Though they still carry the long-term nickname “Stalin’s Teeth” on this side of the former Iron Curtain. 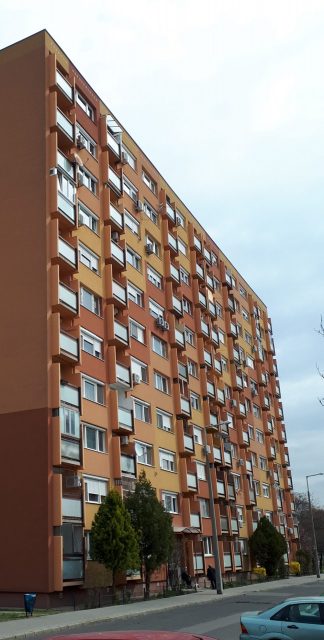 But it is not just ex-Soviet satellite states that took to these structures. Tower blocks appear in mid- to late-20th-century English life too. As epitomised in UK television shows “Only Fools and Horses” and “Minder”, which are retro dramas based in outer London and that play out general life and hardships for the working classes in much the same way as here in Hungary. Both these classic shows are resolutely at opposite ends of all things imperial in the English capital otherwise.

Recently, to overcome the obvious tag tower blocks have, there are nowadays the newer and perhaps better designed, less greyish modern-day “high-rise” varieties. They are often used, as well as for flats, for offices, hotels, shopping centres and so forth, and are generally made to be more fashionable, as noted with the London Docklands and perhaps the District II Mammut shopping centre. To qualify for this high-rise accolade, the structure has to be at least 23 metres high. This is then followed by skyscrapers, which are at least 150 metres tall.

Also, from a marketing perspective, to say one belongs to a modern-day “high-rise” is more impressive for upwardly mobile individuals than living in a bygone-esque tower block. Even so, the materials used are still relatively similar, both obviously dependent on reinforced concrete and steel frames. Theoretically, despite modern-day advancements, there are not too many differences between a common Buda or Pest tower block or a Manhattan skyscraper other than the obvious length, strength, sizes, proportions and eventual styles. For these typical concrete constructions have continued to be a strong feature of Modernist architecture throughout the 20th and 21st centuries worldwide.

Their technical and economic advantages are that such quick and easy structures clearly overcome high population densities in small, confined areas. Plus, they decrease the cost of municipal infrastructure compared to the various low-rises and regular detached family homes. This is a very common feature in extremely overcrowded places such as Hong Kong.

Size and dimension-wise they vary, but the repeat characteristic is that they remain bulky, relatively cubist and rectangular, and on some occasions pointed, coned, triangular and cylinder. All are designed solely for practical living purposes over everything else. But beyond final virtues, aesthetically a tower block, regardless of artistic endeavours, still remains cosmetically a tower block, unable to shake off their long shadows over their neighbourhoods, nor transfer into an inspiring blossoming beauty or wonder. Worse still, some tower block neighbourhoods are known for higher levels of crime, as compared to the more pleasant, greener locales elsewhere.

In the Eastern Bloc, tower blocks were constructed throughout the 1950s, 1960s and 1970s. They were built in the same uniform socialist realist and minimalist way, a distinct feature from that time. The ones in Hungary are fairly respectable and generally well positioned, at least compared to Romania, where tower blocks are not only notoriously bleak, they also frequently and indiscreetly feature even in the most prominent areas of various towns and city centres, most notably in Bucharest, as well as in and around the natural Transylvanian environments, regardless of how out of place they may be. 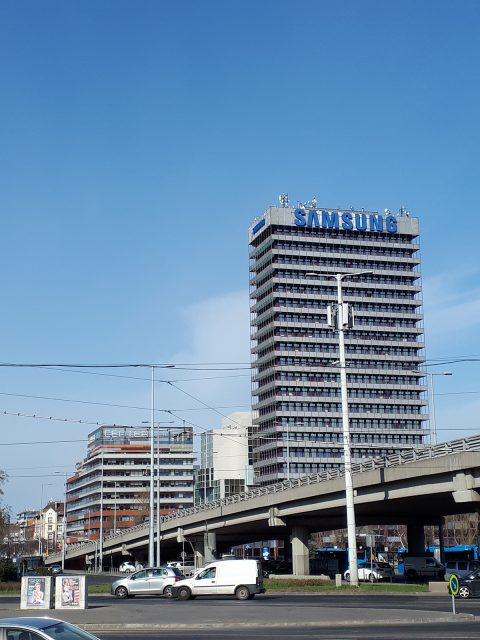 Many were “propped up” in the most unconventional way, side by side with churches, historical monuments and anything resembling high cultural attributes. For much relating to local life and heritage had little say and would be overshadowed and sandwiched by these bombastic, poor quality structures that were deliberately “placed” in an unsubtle way due to “statement value” by former dictator Ceausescu. The mass construction of standardised housing blocks prevailed throughout his time in power, 1965 to 1989, and many still have downtrodden appearances today.

Inspiration for this “glorious realist dream” came in 1971, after an official visit to North Korea. Ceausescu was impressed by the country’s “systematisation” procedure, which consisted of large-scale demolishing, clearance and “recreations” of existing “superfluous” areas, in whole or in part, in order to simply “build blocks” anywhere, regardless of practicalities, local history, environmental concerns or preserving local culture.

This was his master plan and contribution to the post-war housing for the masses, as well as to maintain the ideology of singular communism and defiance to all else. As strongly noted with the contradictory “People’s Palace” in central Bucharest, this second-largest building in the world was constructed (by force) by the people, as well as by using and saturating many local resources, regardless of budget and environmental matters.

To build Ceausescu’s palace in the city centre meant demolition and clearance of much of the immediate landscape on an industrial scale, as well as relocating thousands of people elsewhere in this “Paris of the East”. Even so it was never fully finished. When near completion this dysfunctional, and very superfluous “billion dollar” structure dedicated to him was finally fenced off from the people, but at the same time given to the people as a symbolic remembrance token of this “great leader”. Finally, after much all-round damage and turmoil, revolution came and The King of the Tower Blocks met his inglorious fate by firing squad on Christmas Day in 1989.

Everywhere, debates about these buildings continue. Another downside of these prefabricated blocks is that they often have shorter life-spans as compared to the average house or steadier low-rise. Some have in the shortness of recent time deteriorated and for safety reasons had to be knocked down, perhaps sooner than expected.

Since post-millennium times, much has been done to at least enhance and restore their interiors and exteriors with improvements. Even a simple coat of bright paint cheers them up as compared to how all once were in the Buda and Pest suburbs years before.

In Western Europe, the trend has recently been to take down tower blocks where possible to preserve the historic city centres. In the case of Frankfurt, which was heavily bombed during World War II, this city really had to start all over again, and is now known as the new high-rise progress city of Europe, where new, modern-day skyscrapers dominate the skyline.

Regardless of debate, the more modest, mid-range varieties in Budapest and elsewhere still serve the community. I will now leave the final matter for you to decide if they have further redeeming value or not.

“Except to the eye of love, one Terrier dog is much like another.”