Europeans say the bureaucracy in Brussels should be reduced

Survey: The majority of Europe believe in a strong nation-state cooperation and not in increasing Brussels’ influence

Written by BT
Recently, Europe has been facing challenges that have not been seen for a long time. Regarding the spread of the coronavirus pandemic, the associated economic difficulties and the management of increasing migratory pressures, European citizens can rightly claim Brussels’ effective involvement and rapid EU-level decision-making that will provide meaningful assistance to the Member States. The analysis, based on the research of Project Europe conducted by the right-leaning Századvég, focuses on the 27 EU Member States and the United Kingdom, showing that although European citizens are committed to the European Union as a community and a cooperation scheme, they disapprove of the activity of Brussels’ bureaucracy that is leading the European Union. The survey also covered the assessment of member state sovereignty, European and national identities, and of NGOs and lobbying organizations engaging in political pressure.

The survey shows that a relative majority of European citizens (49 percent) have a positive attitude to the European Union as a community of European nation-states, while 31 percent take a different view. It is interesting that 58 percent of the respondents from the V4 countries (Hungary, Slovakia, the Czech Republic and Poland) expressed a favourable opinion about the European Union, i.e., it can be stated that the citizens of this region, with the exception of the Czech Republic, are strongly pro-European. In light of this, it is less surprising that more than two-thirds (69 percent) of the European respondents trust the European Union, while 27 percent expressed their distrust. For the Visegrad countries, these proportions are 76 and 20 percent. The European respondents’ commitment to EU membership is shown by the fact that in a referendum on EU membership, more than two-thirds (67 percent) would vote to stay, and only 24 percent would vote to leave. Three-quarters (75 percent) of the citizens of the V4 countries and 81 percent of Hungarians support that their countries remain members of the EU.

Europeans say the bureaucracy in Brussels should be reduced

It is important to emphasize that, in contrast to positive opinions about the European Union as a form of cooperation, the performance of Brussels’ bureaucracy is judged differently. The survey points out that nearly three-quarters of European respondents (74 percent) and 77 percent of V4 citizens say that administrative barriers, the money spent thereon, and the number of bureaucrats should be reduced. Interestingly, the majority of the respondents in every Member State would support the reduction of EU bureaucracy. 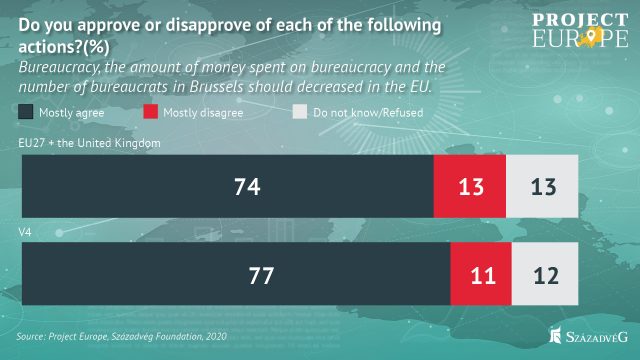 The excessive organizational system and unclear responsibilities have a negative impact on the functioning of the European Union. In light of this, it is not surprising that, with the exception of Denmark, the majority of the respondents in every EU Member State believe that if Brussels does not act in time in a crisis, the leaders in Brussels should also take political responsibility and resign. 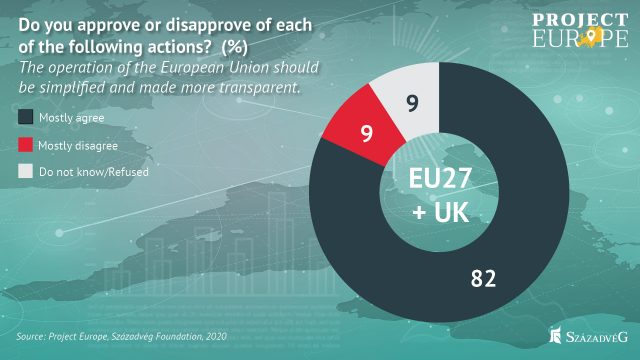 Europeans believe in an EU built of strong nation-states

Public debates on the division of competences between the bodies of Brussels and the Member States, as well as on the degree of member state sovereignty, are constant accompaniments to European politics. The research shows that a relative majority of European citizens (49 percent) would give Member States more power over Brussels, and only 34 percent believe that the EU should have more power over Member States. The demand for national sovereignty is even stronger in the Central European region: 71 percent of Czechs, 69 percent of Slovaks and 54 percent of Hungarians support a stronger nation-state framework against the expansion of powers in Brussels. 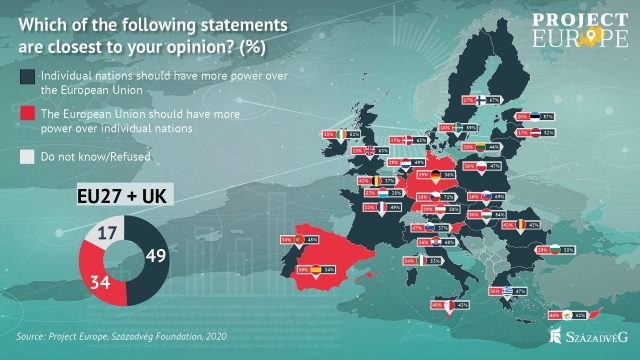 In this context, the survey also points out that, for European citizens, national identity precedes European identity, as more than three-quarters (77 percent) consider themselves to belong primarily to their own country than to be European. Interestingly, no EU Member State has a majority of the respondents who consider themselves to be European rather than belonging to their own nation. In light of all this, it can be said that Europeans, and Hungarians in particular, believe in a European cooperation based on strong nation-states that respects national identities, as opposed to an excessive concentration of power in Brussels. 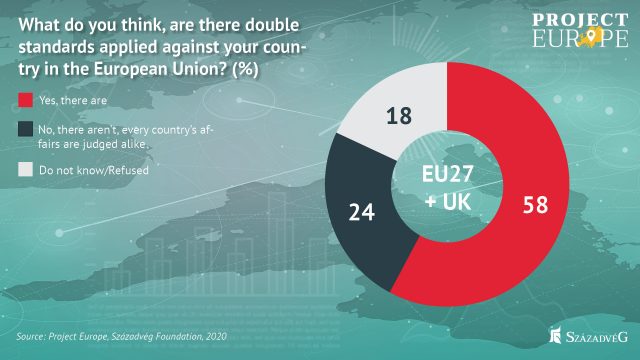 It is a phenomenon that various foreign-funded NGOs, with the intention of influencing EU and member state political relations, have recently become increasingly prominent in the European political arena. The lack of social embeddedness of these organizations is shown by the fact that 56 percent of European respondents oppose allowing businessmen with significant business and political influence to have a say in the internal affairs of EU countries through NGOs and other lobbying organizations, and only 26 percent of them support such interventions. Interestingly, more than three-quarters (80 percent) of Hungarians reject the attempts of these NGOs to exert political pressure, while 9 percent took a different stance. 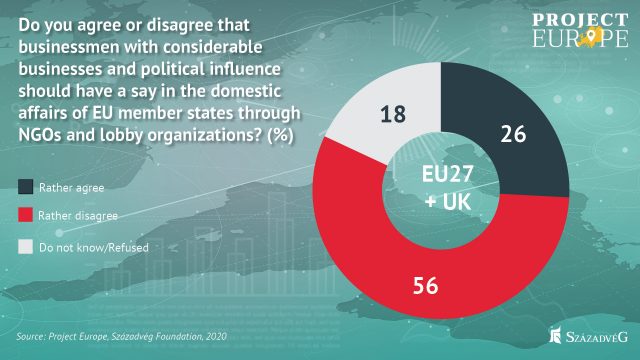 In the first half of 2016, the Századvég Foundation conducted a public opinion poll survey covering all 28 European Union Member States, with the aim to analyse the opinions of EU citizens regarding the issues that most affect the future of the EU. In a unique way, Project28 conducted the widest possible survey of 1,000, that is a total of 28,000 randomly selected adults in each country. Gaining an understanding of society’s sense of prosperity and mapping the population’s attitudes towards the performance of the European Union, the migration crisis and the increasing terrorism were among the most important goals of the analysis. The Századvég Foundation, on behalf of the Hungarian Government, conducted the research again in 2017, 2018 and 2019, which continued to reflect on the topics that most determined the European political and social discourse.

In 2020, the survey, now called the Project Europe, will continue, with the aim of mapping the population’s attitude towards the most important public issues affecting our continent. In addition to society’s sense of prosperity, the performance of the European Union and the attitudes towards the migration crisis, in line with the latest challenges affecting Europe, the dominant theme of this year’s poll is the coronavirus pandemic, climate change and anti-Semitism. In addition to the European Union Member States, the 2020 research covered the United Kingdom, Norway and Switzerland, interviewing a total of 30,000 randomly selected adults using the CATI method.