Written by BT/MTI
An auction and raffle to help children in Ukraine via the United Nations Children's Fund, UNICEF, will be held at an event to mark England’s Saint George’s Day in honour of the country’s patron saint at the Corinthia Hotel Budapest on April 30. The evening, billed as “A Feast of English Music”, will also mark the Platinum Jubilee of Queen Elizabeth II.

The social networking event is open to all, in particular the English-speaking community of expats and cosmopolitan Hungarian locals from the country’s various circles. They will hear classical English music by Purcell, Handel and more, and a “Funny Poetry” speech about William Shakespeare by Alexis Latham. There will be a singing performance of the English hyme and “sporting anthem” “Jerusalem”. Expat covers band The Vibe will play songs of the Beatles, Coldplay, Arctic Monkeys, Blur, Editors, Radiohead, Kasabian, Cure, Kaiser Chiefs and more. DJ Woods will spin English tunes.

“Anyone for Cricket?” will be a sport corner with the Hungarian Cricket Association, to meet local players and speak about the national league and tournaments, and perhaps have a photo taken holding a bat while wearing pads and a helmet.

Television presenter Zsuzsa Demcsák will host the raffle and auction to benefit the Hungarian National Committee of UNICEF. This organisation has already been providing humanitarian assistance to children and families in Ukraine for eight years. The prizes include a stay for two in an Executive Suite at Corinthia Hotel Budapest with a print by artist Boglárka Nagy, also a one-year premium health plan from private clinic FirstMed. 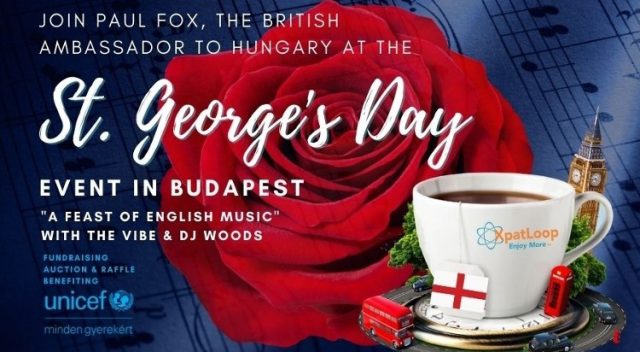 Attendees are asked to wear something blue if possible, as it was said to be St. George’s favourite colour and so has become a custom to do so at events in England marking his day. Another St. George’s Day tradition is to wear a red rose if you wish.

The legend of St. George and the Dragon tells of George slaying a creature that demanded human sacrifices. This was apparently acceptable until a well-loved princess was chosen as the next offering, so he rescued her and slayed the dragon. Hungary recognises Szent György.

Saint George is also the patron saint of Bulgaria, Georgia, Portugal and Romania, as well as the Spanish communities of Cáceres, Alcoy, Aragon and Catalonia. The saint also has his state holiday in Rio de Janeiro, Brazil.

This international community event is presented by XpatLoop.com. For information and ticket types, see https://tickets.funcode.hu/event/-st-george-s-event-budapest