Written by György Frenyó
It is little-known that Budapest used to be home to hundreds of skillfully crafted neon lights. The colourful signs that used to advertise various things from hairdressers to traffic safety so dominated the city in the 1970s and 1980s that Budapest was called the neon capital of Europe. However, as with much heritage of the previous era these strange pieces of art also disappeared after the fall of communism. Today only a freckle of the original lights flicker through the night, while most are just dust-collecting ruins reminding us of different times. Luckily, Luca Patkós and her new company, CSŐ, are working so that many neons might light up once again.

As the fall of communism becomes more distant in time, more and more mementos of the highly disputed era disappear from the streets. Statues and buildings vanish, squares are renamed, things changes according to the latest political and economic tendencies. Thus it could be viewed as a normal part of historical change that the neon lights that once dominated the Budapest cityscape for so many years also fade into darkness.

Today the untrained eye might not even notice the decaying remnants that still stand in various places around town advertising such important products as fruits and vegetables, or natural gas. Luca Patkós – who in her day job works for one of Budapest’s most promising design studios – believes that these special relics of industrial art should not disappear, which is why she founded the company CSŐ that dedicates all its profits to saving these once-magnificent ornaments.

Just like many of the city’s residents, the 29-year-old designer used to be unaware of these special Budapest landmarks. It was not until she was searching for a project for her diploma work that Patkós became acquainted with this exceptional heritage.

“I found neon by chance,” she explains. “I read an article about it on the internet. And after I read it, I thought, wow these are great.” Later she got in touch with other neon enthusiasts, such as the founders of Neonon, who were saving neon lights in the early 2000s, and neon maker János Bácskai, who helped her make her own neon signs for her diploma exhibition.

“Two years later I made a booklet together with Spanish photographer Isabel Val, who did a photo series earlier about neon lights in Budapest,” says Patkós. “Our bilingual brochure was about the history and the technique of neon. And it even incorporated a map of all the still existing neon lights of the city with their stories, etc.”

Having never done anything like this before, their advertising was limited to social media. So they were surprised when one of the largest Hungarian online news outlets, index.hu, wrote an article about their project, and half the booklets sold overnight. Patkós took this instant success as a sign that she should do more for these special lights.

But it was not until she saw how fast these industrial relics disappear from the streets that she decided to take action. As she told The Budapest Times: “I realised that it is nice that I am working with these projects and spending all this energy, but the fact is that these neon lights are slowly disappearing. And if a shop closes, then in a few months the lights above will disappear.”

And there are enough people and enterprises who like to remove them. The biggest neon collector in the region is probably the Muzeum Neonow in Warsaw, which at first just expressed interest in the neon lights of Hungary and the Czech Republic, and finally started buying the lights.

“They buy up something that is of value to Budapest and important to the locals, and they bring it to Warsaw,” explains Patkós. “So I came up with the idea of making these posters that are cool and hip, and from the money we will renovate neon signs. And this is how CSŐ started. This is how this whole thing started in December 2019.”

Similarly to so many other remnants of communism, the story behind the neon lights of Budapest is an unusual one. Although the city already had many in the 1930s, most were destroyed during World War II. After the Soviet occupation Hungary became communist and as such had no free-market economy in the classic, capitalist sense. Thus there were no market-based companies that needed marketing for their products, which left Budapest and the country with very little advertising.

To change this situation, the Communist Party appointed a committee to make a plan to flood Budapest with neon lights. The whole action was designed to spread the image of a strong and happy socialist country that had a capital which could compete with any other metropolis in the world. And it was executed with great precision. Within one year 60 larger and more than 100 smaller neon lights were planted in various places in Budapest.

“Of course there were no real brands at the time in Hungary,” says Patkós. “Which is the reason why they wrote things like Caution, Patience, Politeness; or Safety; or Buy ready-made clothes; or Hold on in the tram.”

Indeed, such guidance might seem a little odd from a Western perspective. But for Luca Patkós, this is what makes their story so fascinating. “This is what I love about the whole thing, these warnings to people,” says the young designer. “Or when they just write somewhere Cipő [shoe], without any explanation.”

When creating the products of CSŐ, Patkós found great inspiration in these lights with their questionable marketing value. As she says: “It was also important for me that it not only looks good, but it is something that you find funny and interesting even if you know nothing about the whole thing.”

Therefore, the first four poster designs were based on signs such as Kedves [Nice], which used to be a bistro at Ferenciek tere; or Csemege [Delicacy], which was the sign of a food store; Kézimunka [needlework], which was supposed to make knitting and sewing more popular; and finally Óvatosság, Türelem, Udvariasság [Caution, Patience, Politeness], which used to be a sign for traffic safety.

At first the designer printed only 30 pieces of each poster. She explains: “As I had to pay for everything myself I could not afford to print that many, and I did not want to have a lot of leftovers.”

The final boost came from a pop-up design store that wanted to sell some products about Budapest. They liked the idea and gave Patkós a platform. “It was a good deadline for me because I had the idea for a long time, but now I had the motivation to finish it. And it also gave the product good marketing.”

The name CSŐ comes from the Hungarian word for pipe, which also refers to the tubes that constitute the neon signs, but it is also a Hungarian greeting form derived from the Italian ciao. As a graphic designer Patkós was trying to make something that looks great as well. “I chose very bright colours and made them very decorative. I even applied an extra fluorescent layer to make them glow in the dark.” 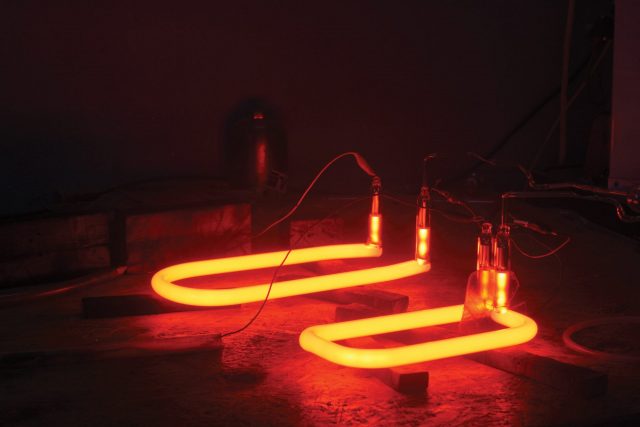 Bath in the dark

Following the success of the first line of posters, it was finally time to organise the first renovation. This process usually begins with Patkós contacting multiple stores and asking them if they would be open to renovating their neon sign. “I have been to many places. There were times when the sign got taken away in front of my eyes (by the Warsaw neon museum), there were people who were willing but they got ruined by Covid, and of course there were some who just straight out refused to do anything about it.”

Sometimes there was no company or person that had the right to do anything with the neon light. Other times people were afraid because they had already had experiences of people wanting to take away their neon signs. “I understand why people are distrustful, especially when I tell them that I will renovate it without them having to pay. That is very suspicious to them.”

Finally, CSŐ was able to find a partner they could co-operate with, the Shelter Foundation (Menhely Alapítvány) that operates a home in downtown Kürt utca. The building was always dedicated to helping those in need, and for a long time it functioned as a public bath, offering those without a bath or a home an opportunity to clean themselves. Thus it still has a sign above the entrance saying “Fürdő” [Bath], that used to light up the otherwise dark and colourless street. It was this sign that CSŐ chose for their first renovation project. 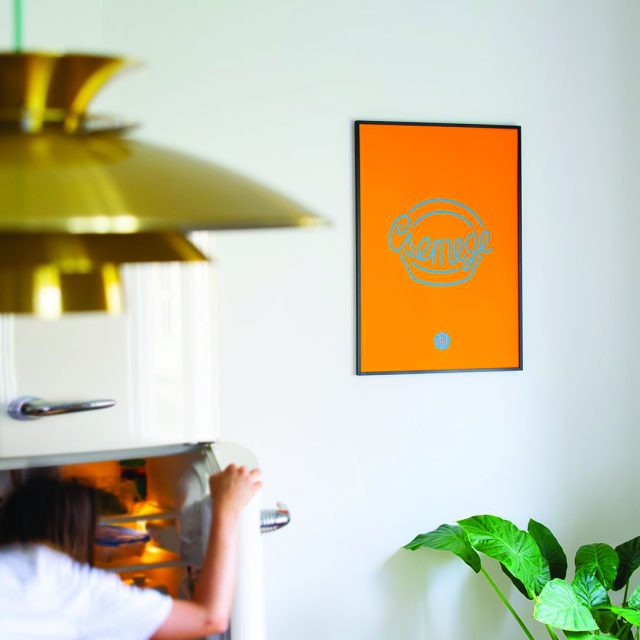 After reaching an agreement the preparations could begin. As Patkós explains: “We went there with a neon maker, Mihály Hallgas, and he gave me an estimate how much it would cost. And when we finally made enough money from selling posters, we took started the process.”

Of course, taking off such a sign is not an easy manoeuver and they even needed some scaffolding. Once the letters were down, they could start renovating. “With Fürdő there were some letters broken. Some were not broken but they did not light up. And of course the base of the letters was rusty. Furthermore, the whole thing works with a transformator that stopped functioning a long time ago. After we took it off, Misi was redoing the letters and filling them up with gas. And when it was done we had to go back and do the scaffolding again to put it back up.”

Since the project began CSŐ has received a lot of attention on social media and other news outlets. “A lot of people like them, the older generations because of nostalgia, the younger one because it is cool and retro,” says Patkós.

But she is sceptical about the media attention. “Every year there are some articles about how sad it is that we are losing all these great signs. And everybody shares them. But then nothing happens. This is my main problem, that the city hall or the municipal government do not do anything about it.”

Patkós believes Budapest should start cherishing these industrial works of art. “Because these do have a value. If you did not hear about the neons of Budapest you might not be aware of all the beauty that you can see. But if you find out about it you realise how many beautiful signs there are.”