Written by BT/MTI
Pope Francis urged Christians and Jews to take a united stand against anti-Semitism in Europe at a meeting with the delegations of the Ecumenical Council of Hungarian Churches (MEOT) and Hungarian Jewish organisations in Budapest on Sunday.

In his speech, Francis compared the relationship between Christians and Jews to the Chain Bridge linking the Buda and Pest sides of Budapest. He said Jews and Christians no longer wanted to see each other as strangers but as friends.

The two communities must fight anti-Semitism together to prevent the “waves of hate” from damaging their relationship, he said.

“Only if we become roots of peace and shoots of unity, will we prove credible in the eyes of the world, which look to us with a yearning that can bring hope to blossom,” the pope added.

“Whenever we were tempted to absorb the other, we were tearing down instead of building up,” he said.

Francis noted that Sunday’s meeting was taking place between Rosh Hashanah, the Jewish new year, and Yom Kippur, the Jewish day of atonement.

He said people and communities should build bridges while respecting everyone’s religious freedom instead of living in isolation.

In his greeting to the pope, Reformed Church Bishop Jozsef Steinbach, who heads the MEOT, said the International Eucharistic Congress was a blessing for Hungary’s Christians.

Steinbach said God’s gift of Jesus Christ to humanity mandated Christians to show love to and look out for each other, respect life and protect God’s creation.

The bishop asked for heavenly strength and blessing on the life and service of Pope Francis.

The MEOT presented the pope a facsimile of the Vizsoly Bible, the oldest surviving complete Bible translated into Hungarian.

A message from Chief Rabbi of Hungary Robert Frolich, who was recently hospitalised, was read out by Chief Rabbi Zoltan Radnoti.

In his message, Frolich wrote that despite the conflicts of the past, the common religious heritage and sacred traditions of Judaism and Christianity served as a beacon for the future of humanity.

Jews and Christians both know what it is like to be persecuted for their faith, the chief rabbi wrote, adding that they had also seen many times in the course of history that those who have God’s love and fear in their hearts “see the divine spark in others, respect man and the image of God, and turn to their fellow man with true love”.

Over the past decades Jews and Christians have done a lot to “break down the walls that separate them” and to see each other as friends, he added. 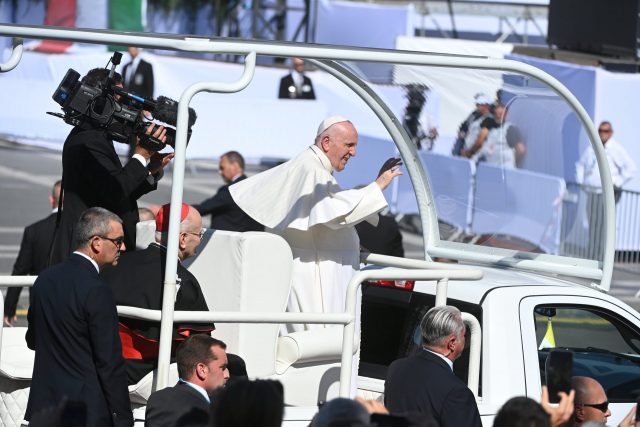 Pope Francis at the closing mass: ‘May the Cross link the past, future’

Pope Francis on Sunday expressed his wish that the Cross be “the bridge between the past and the future” for those gathered for the 52nd International Eucharistic Congress in Budapest.

Before reciting the Angelus prayer at the end of the closing mass of the congress in Heroes’ Square, the pope said the feeling of religion was what gave life to the Hungarian nation.

However, the Cross planted in the ground “not only invites us to be well-rooted, but also reaches high and extends its arms to everyone”, he said.

“The Cross invites us to be firm in our roots, but we must not be satisfied with this,” the pope said, adding that the faithful should also “draw from the fountain and give drink to those who thirst in our time”.

“My wish is that you be grounded and open, rooted and considerate,” Francis said.

He said the Mission Cross called on the faithful to preach the Gospel and the message of God’s eternal love. “In today’s world hungry for love, this is the nourishment that all Hungarians crave,” he said.

The pope thanked what he described as “the great Hungarian Christian family”, which he said he wanted to “embrace in its rites, its history, its brothers and sisters, both Catholic and those of other confessions: all journeying towards full unity”.

He also thanked Bartholomew I, the Ecumenical Patriarch of Constantinople, the bishops, priests and believers who gathered for the congress, as well as the event’s organisers.

“God bless the Hungarians”, the pope concluded his prayer in Hungarian.

Prime Minister Viktor Orbán asked Pope Francis not to let Christian Hungary perish at his meeting with the pontiff in Budapest on Sunday, the PM’s press chief said.

At the meeting at the Museum of Fine Arts, Orbán presented Francis a copy of the letter Hungarian King Bela IV wrote to Pope Innocent IV in the 13th century, Bertalan Havasi said. 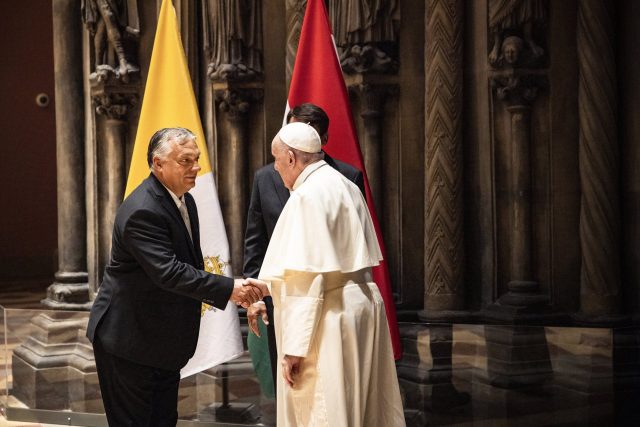 Pope Francis also met with President Janos Ader, Hungarian bishops and the delegations of the Ecumenical Council of Hungarian Churches and Hungarian Jewish organisations at the museum.

At his meeting with Orbán and Ader, which was also attended by Deputy Prime Minister Zsolt Semjen, Pope Francis was accompanied by Vatican Secretary of State Cardinal Pietro Parolin and Archbishop Paul Richard Gallagher, the Vatican’s foreign minister.

The Vatican said the “cordial” meeting lasted about 40 minutes. Pope Francis and the Hungarian officials discussed the “role of the Church in the country, the commitment to the protection of the environment, and the protection and promotion of the family”, it said.

Erdo: ‘Our calling is to connect cultures, religions, nations’

“We consider it our calling to act as a bridge between the East and the West and different cultural and religious worlds and nations,” Cardinal Peter Erdo, Archbishop of Esztergom-Budapest, said at the closing mass of the 52nd International Eucharistic Congress in Budapest on Sunday.

In his greeting to the pope, Erdo said the mass was a symbol representing “our unity around Christ under the guidance of the successor of Saint Peter”.

The representation of various Christian denominations at the congress “signals our shared desire for the unity of all who are baptised”, Erdo said, greeting Bartholomew I, the Ecumenical Patriarch of Constantinople.

He said the presence of the representatives of other religions, particularly members of the Jewish community, demonstrated the calling of the church “to be Christ’s ambassador to the nations”.

He noted that this year marked the 15th anniversary of the signing of a document of peace and friendship between the members of the Hungarian and Slovak bishops’ conferences.

Cardinal Piero Marini said the Christian community has “shown its true face”, one of “inclusion and openness”, in Budapest, thanks as well to the presence of Pope Francis, speaking at the closing mass of the 52nd International Eucharistic Congress on Sunday.

“We have all come here, to gather around the altar, from different cultures and traditions,” Marini, who heads the Pontifical Committee for International Eucharistic Congresses, said at the mass celebrated on Heroes’ Square.

The “dream of a church whose doors are open” has been realised, the cardinal said, making reference to the pope’s apostolic exhortation Evangelii Gaudium.

The believers, after taking “the bread of life”, return to their homes, their schools, their offices, to heal others and lift them up with words of peace and acts of reconciliation, he added.

The cardinal said the Holy Spirit “gives us today again the courage to stand before the world in the way of Jesus”, who at the Last Supper demonstrated that “we must not reign, but serve; we do not belong to the rulers of this world, but are the children of God’s Kingdom”.

The salvation that comes from the eucharist, Marini said, becomes a “eucharistic culture”, capable of mobilising men and women of good will to reach out to the poor, work for peace, be stewards of the creation, be generous in ecumenical dialogues and share in difficulties.