Written by Alexander Stemp
“Is that Basil's car – and Fawlty Towers?” For a brief but surreal moment the distinctly red modern-day automobile parked outside the elaborate whitewashed building turned into a remarkable double-take of John Cleese’s great 1970s British comedy, right here in suburban Zugló.

And the rain was a bonus, as it provided an obvious English outlook and concluded this “Fawlty mirage”. For those who are devotees of the hilarious sitcom, I am sure you will appreciate my contrived impulse on that particular recent-time day. Such a remarkable coincidence would never have occurred were it not for those additions there and then. 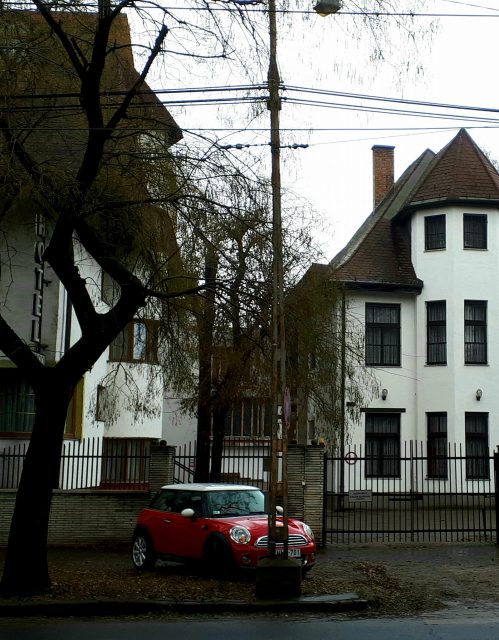 As it all came together, it also presented an unexpected but irresistible desire to compose this ambitious article, which may have otherwise amounted to nothing without the props, especially the eye-catching representation of hotel manager Basil’s red 1967 Austin 1100 Countryman Estate car. Parked outside a building not only similar in vein to the famous Fawlty Towers but with a weathered hotel sign outside, and with no traffic or obstructions in the way, suddenly all three attributes were in unison and there it all was. So much so that this could have symbolically been a “Fawlty Towers” stage set.

Certainly this amused me when there. As needless to say, this one of a kind television show, filled with many laugh-out-loud moments, was John Cleese at his best. With word-perfect script writing, these wonderfully crafted 12 episodes by Cleese and his former wife Connie Booth, who played the hotel waitress Polly, continues to delight and shock audiences world-wide.

Each program took them six weeks to write, and although this timepiece has become dated to a certain degree, it hardly matters. “Fawlty Towers” is still one of the all-time comedy greats and remains very popular today. Who can forget, in the “Gourmet Night” episode, when Basil’s car breaks down and he screams “Start! You vicious bastard!” at it, followed by a “damn good thrashing” with a tree branch?

During early days and occasionally now, it is always good to know that the program, translated in Hungarian as “Waczak Szálló”, is generally well received here. One of my conversation openers at various business networking and social events would be to talk about this sitcom. It is a postcard from home that saw me through many formal and informal events alike.

Most have heard about the infamous Basil Fawlty, the leading character and inhospitable hotel host who generally dislikes his job as well as the guests. His attempts to run the hotel are farcical throughout. I hope the service is better at this lesser known establishment here in my Budapest neighbourhood.

From an architectural perspective, the basic and fairly nondescript building in Zugló is clearly not as elaborate as Fawlty Towers. As for the inside, who knows?  I sense it’s best not to mention this nearby hotel’s name, should I have given it a faulty impression. But it is on Thököly út in District XIV, and if that time-worn hotel sign is anything to go by, I suggest these premises also originate from the 1970s, and remain resolutely so today.

Inspiration for “Fawlty Towers” came during the early 1970s when Cleese, during his time with “Monty Python’ Flying Circus”, was filming in the “English Riviera” region, based at a hotel in Torquay. The cast and crew were so appalled by manager Sinclair and his erratic behaviour that everyone moved out, with the exception of Cleese and Booth, who stayed on and made notes. The result, also starring Basil’s long suffering wife Sybil and Manuel the hapless waiter, is legendary. 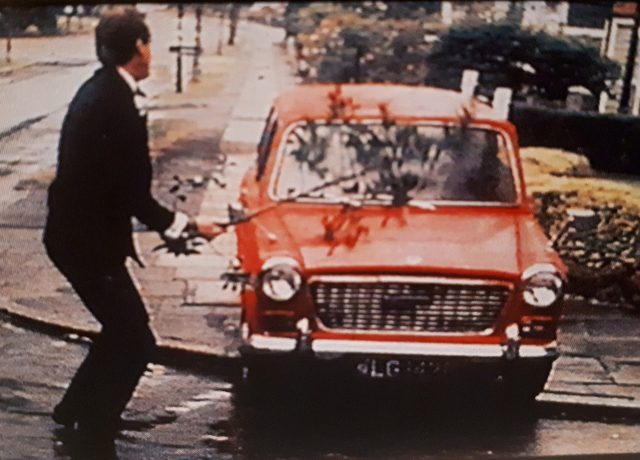 “The Builders”, “The Hotel Inspectors”, “The Germans”, “The Psychiatrist”, a dead guest, a temperamental moose, a wedding party, a Waldorf salad, a garden gnome, an ingrown toenail, a rat and much more have little or no concern for Fawlty’s frenzied state of mind and general well-being.

Finally, when I passed by on the following day, as on many times before, the rain had cleared and the symbolic red car was no longer there. The entire “Fawlty” illusion had gone. Still, I give grateful thanks to that previous on-the-spot moment. It will be a long time before a photo opportunity like this strikes again.