Crossroads is a mix of symbols from different days

Fast meets the past

Written by Alexander Stemp
It’s always extremely busy at the Pest end of Árpád Bridge, where some 100,000 vehicles pass through daily on their way to the city, suburbs and airport. The heavily congested 24/7 hub was never meant to be fanciful and is suitably nondescript, but what makes this functional-though-not-so-inviting locale a little more intriguing (and perhaps worth an article) is when one looks close-up (preferably not while in transit) and sees the distinct, heady mix of two contrasting but closely linked recent-time architectural trends.

The many landmarks are generally cluttered and placed in no particular juxtaposition to one another. There are, as expected, the new, very obvious and occasionally flamboyant statement-value office blocks. With much deficiency, these clash heavily with the distinctly minimal and tokenish, bygone-esque buildings and odd, stray monuments from communist times that once lined the sky here. Not that this is either anything new or particularly spellbinding, but many of these former symbolic structures are now literally and physically becoming more and more over-shadowed by the modern-day attributes, and are slowly disappearing.

It is with some aptness that the forsaken Munkások (Workers’ Statue), which comes with no other name and minimal identity, now stands relativity close and in plain view of the glistening and bombastic Samsung tower block, as if to say “We built it”. Even so, it is obvious these “workers” belong to the same era as the nearby humbler Államkincstár, the Hungarian State Treasury building (as photographed with an additional modern-day backdrop looming in the background). The Államkincstár was a State Party headquarters not so long ago, and today these relics could pass off as some form of exhibits,

Both these aesthetical genres represent conflicting regimes, still within living memory for some.  Remarkably, research finally showed that the Munkások monument was made surprisingly late, by sculptor István Kiss in 1982. The chrome steel plates of this robust objet de propagandist art stand at a perhaps proud 2.6 metres high and display four symbolic workers evincing harsh facial expressions. They could clearly have been swept away to the Statue Park post-1989 but perhaps were left to stay as a way of resenting the new blocks that now eclipse them. Could it be that they are sneering at today’s thoughtless capitalists who, by the thousands, walk by every day and generally ignore them. Whatever the reasons they remain, sentiment for this retro relic seems to be minimal. 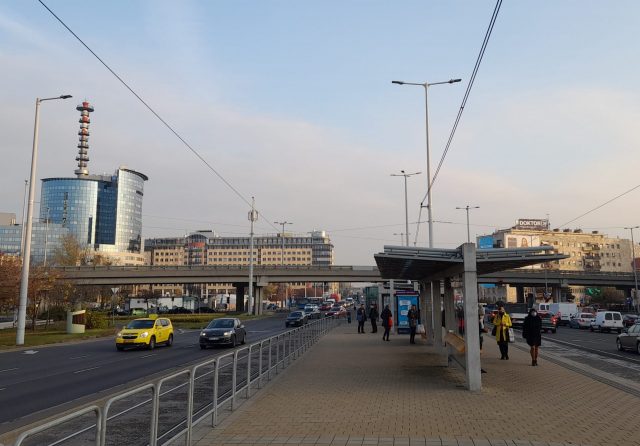 Remarkably, the statue is in good condition, albeit out of place with today’s theme. Then, beyond this spot are the 21st-century complexes combined with residential tower blocks also from the socialist era. All are in view from this unexpected and rather surreal landmark, but how long will last century’s scenery last?

Directly across the arduous Róbert Károly körút, one is greeted by an avid mix of avant-garde high-rises versus the drab but well-kept József Attila Színház. This old-style communist local theatre (also photographed) comes with greater value than expected, offering strong socialistic aesthetics from inside and out. It faces the immediate metro and tram stop, and while it may be artistically and decoratively opposed to the lavish State Opera House on Andrássy út, it matters not. Be assured, it’s a fairly cosy affair when inside and comes with good shows and cheaper tickets, and the interior has a lighter, simplistic ambience throughout.

Then, needless to say, beyond this point further heat, dust, noise and congestion prevail along the concrete lanes, lined with further tower blocks and other odd stray antiquities until further notice. The hustle of everyday life with its additional shops and restaurants is in full flow. 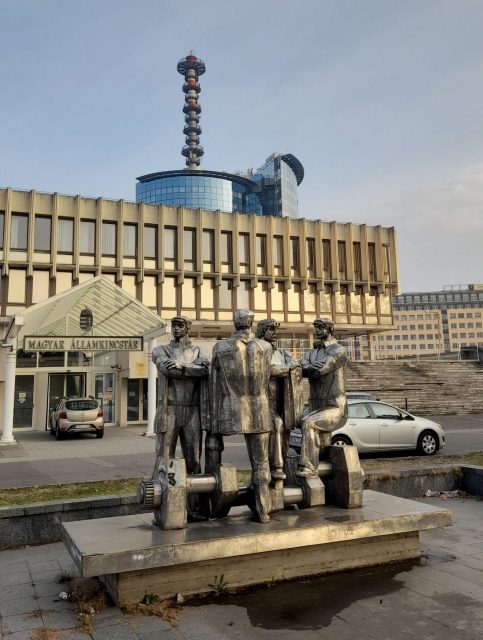 I won’t recommend this jump back, or jump forwards, in time outing to everyone. This is far from essential mainstream Budapest. But if you like architectural differences, odd sculptures and anything away from the tourist trails, make your way there. As a final tip, to achieve a greater and fuller effect, go on a cloudy day. The greyer and thicker the heavens are, the better the visuals.

Reaching the Váci ut, Róbert Károly körút and Árpád Bridge crossroads is best achieved by taking either the Number 1 tram or blue metro line northwards to Göncz Árpad Városkőzpont. From there, check out this neighbourhood your way and look out for an old-style workers buffet to provide you with a fortifying takeaway sausage roll and warm tea to see you through this intrepid neighbourhood. Time roughly required, one hour.