Public has less trust in social platforms than in the mass media, survey says

Written by BT
The main topic of public debate is the role, policy-making function and manipulative potential of social media. The fact that Twitter banned President Donald Trump’s accounts permanently – while in addition Facebook and Instagram blocked the accounts belonging to the former POTUS for two weeks – stirred a great storm within public discourse. But Apple, Google and Amazon became subject to public scrutiny also after they made the mobile app for a social site called Parler, popular in U.S. conservative circles, inaccessible. The significance of the issue was shown by the fact that, among others, German Chancellor Angela Merkel and French Economy Minister Bruno Le Maire have also expressed concerns about Big Tech’s overpower. A recent film, The Social Dilemma, examines the negative effects of social networking sites on the human psyche and social relationships in general.

In June, Századvég conducted a study which addressed the policy-making impact of social media, predicting that totalitarian experiments and the pursuit of digital dictatorship would take on increasing proportions on the part of all-encompassing tech companies, which today can act as potential actors even against democratically elected political leaders. Thus the impact of the new kind of privatized publicity on politics is unquestionable. In other words, the new kind of publicity also carries the possibility of a new kind of tyranny – that is, there is a danger that in the Western world, private companies will set up a social credit system similar to China, which has been set up under central, state control. 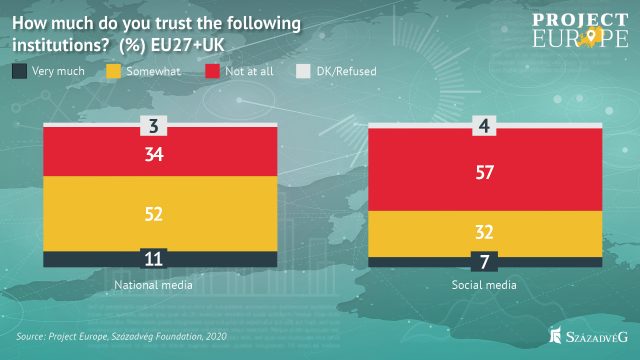 In terms of censorship, 25 per cent of all Member States and the UK consider it acceptable for social media platforms to delete content on a political basis. Rejection of censorship is higher in former socialist countries (64 per cent) and V4 countries (62 per cent) than among EU founders and former entrants (57 per cent).

To cite two extreme examples: in Germany, only 44 per cent of respondents, while in Hungary, 69 per cent, said that social media sites’ political censorship is unacceptable. (This practice is tolerated the most in Germany, with 37 per cent of respondents having no objection to it). However, it becomes clear from the results of the research that there is no Member State in the European Union where the majority of respondents would consider it acceptable to delete user content on a political basis. 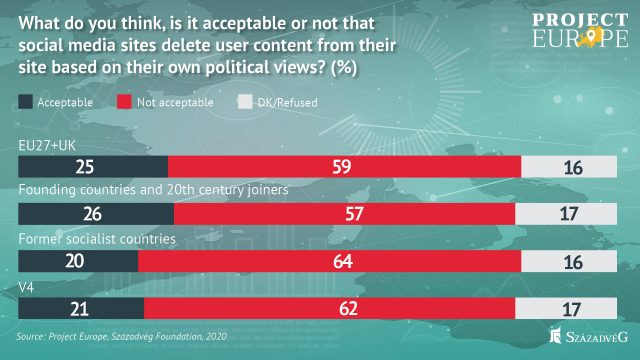 Residents of former dictatorial countries seem to be more sensitive to the issue of censorship than Western Europeans. This may stem from the past experiences of dictatorship, or perhaps from the fact that the inhabitants of these former socialist countries are “protected” from the much more sophisticated, stealthy Western dictatorship of political correctness. In any case, there is no doubt that the issue of social media has become a political one. This finding did not require a U.S. presidential election, as several Senate hearings have already been held in the United States with leaders of Big Tech companies. (One of the most active participants in these debates is Texas Republican Senator Ted Cruz. He is particularly notable for drawing attention to political-based censorship in addition to the concentration of power in Big Tech companies.)

We should also not forget that social media will presumably play a more important role than ever before in the campaign of the 2022 Hungarian parliamentary elections, a circumstance which will most lightly be accompanied by attempts to limit and ban national, conservative opinions.

In the first half of 2016, the Századvég Foundation conducted a public opinion poll survey covering all 28 European Union Member States, with the aim to analyse the opinions of EU citizens regarding the issues that most affect the future of the EU. In a unique way, Project28 conducted the widest possible survey of 1,000, that is a total of 28,000 randomly selected adults in each country. Gaining an understanding of society’s sense of prosperity and mapping the population’s attitudes towards the performance of the European Union, the migration crisis and the increasing terrorism were among the most important goals of the analysis. The Századvég Foundation, on behalf of the Hungarian Government, conducted the research again in 2017, 2018 and 2019, which continued to reflect on the topics that most determined the European political and social discourse.

In 2020, the survey, now called the Project Europe, will continue, with the aim of mapping the population’s attitude towards the most important public issues affecting our continent. In addition to society’s sense of prosperity, the performance of the European Union and the attitudes towards the migration crisis, in line with the latest challenges affecting Europe, the dominant theme of this year’s poll is the coronavirus pandemic, climate change and anti-Semitism. In addition to the European Union Member States, the 2020 research covered the United Kingdom, Norway and Switzerland, interviewing a total of 30,000 randomly selected adults using the CATI method.