Recalling a top book and film

De Gaulle, Budapest both in the Jackal’s sights

Written by Alexander Stemp
Is it me or is it the pandemic or is it both? Locked down and unable to escape the borders I roam the streets of Budapest, where my imagination finds reminders of past places and moments. A bright-red car outside a white hotel (District XIV) instantly brings “Fawlty Towers” to mind, a brutalist office building (District XIV) takes me back to the showcase 1920 Dehzhprom “skyscraper” in Karkhiv, Ukraine, the tower on a Polish church (District X) looks just like the one in Hitchcock’s “Vertigo”, in California…

And now suddenly it seems that another of my favourite films, “The Day of the Jackal”, is all around me. This film is based on the exciting novel published in 1971 by bestselling author Frederick Forsyth CBE, a master of fast-paced thrillers. It is about an assassination attempt on French President Charles De Gaulle, and the film quickly followed in 1973, starring Edward Fox and directed by Fred Zinnemann. And although it was made in Paris and Vienna all those decades ago, suddenly here it is again it seems to me in Budapest 2021.

Although this article may be mere conjecture, it’s still a significant architectural and historic study. Both these two neighbouring capitals, like many others, have their impressive and symbolic arrays of monuments and structures, which need little introduction and continue to feature as statement value backdrops in this film, and many others. They generally stand out from all else in all their abundances.

But what makes Budapest more unique to this cause is certain buildings, monuments, apartments, shops and even the odd car. Some of the timely architecture and atmosphere in Budapest today could retrospectively pass as general scenery relating to this. Period pieces are still found more so here when compared to Paris and Vienna, in original style clearly from bygone-esque times. 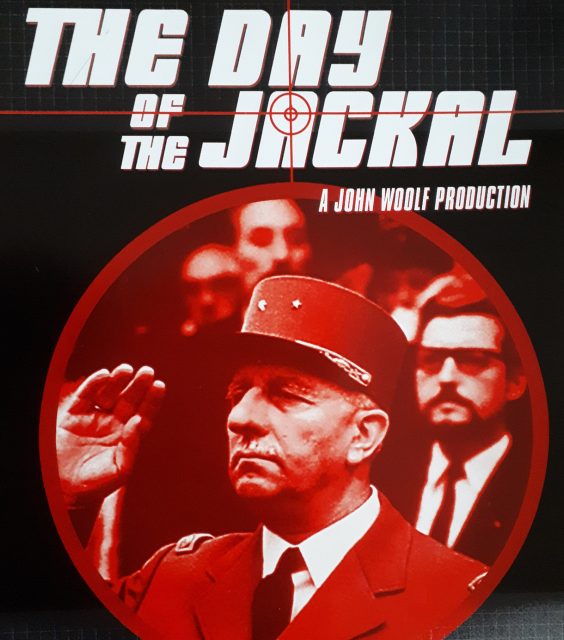 Much from this city could still be a representation of Paris during that time almost 60 years ago. Apart from the oldish, traditional Paris cafe scene, to seek out the Jackal’s environment beyond what’s obvious in the French capital is most likely a lost cause. But to relive the atmosphere of this film here in backstreet Budapest, albeit slightly contrived, is more compelling. Explore the more provincial 8th district Józsefváros for a step back in time and for greater proof on this matter.

The story concerns a plot by a French underground movement, the Organisation Armée Secrete (OAS, or “Secret Armed Organisation” in English) to kill de Gaulle. The OAS is deemed a terrorist group by the government but is seen as patriots by various others. President de Gaulle is accused by the OAS of betraying France by giving full independence to Algeria in 1959-62, thus turning his back on the French citizens who had always lived there.

The unpretentious film opens up at a Paris ministry on August 22, 1962 with a cortege of diplomatic cars proceeding out from the presidential Élysée Palace in central Paris towards Les Invalides, just as a Hungarian diplomatic fleet might leave the Kossuth square outside the Parliament Building and head towards lavish Andrassy út on its approach to Heroes Square.

The convoy drives to the sleepy suburb of Petit Clamart, 10 kilometres from central Paris, similar in vein to the Kőbánya districts. A failed ambush takes place, with de Gaulle, his wife and driver miraculously surviving a barrage of machine-gun fire on their black Citroen DS 19. The convoy was en route to a military airport, of similar capacity to the older, lesser used Ferihegy one.

The following year, while on the run and hiding in the Austrian Alps, in a last desperate bid the OAS leaders and retired paratroopers Rodin, Montclair and Gaston meet undercover in Vienna, at the “Pension Kleist” to hire to hire a professional killer. This nondescript hotel is situated for real at 55 Novaragasse, near the far more illuminating Prater fairground.

Although an uneventful residential Viennese street otherwise, this locale where the Jackal, played by English actor Edward Fox, arrives has become a site that attracts film aficionados. They find a door that is still relatively the same in design albeit now lighter in colour, and still worth a visit. Budapest is full of such fanciful doors.

With France on full alert, the story also has brief interludes in London, Rome and the French and Italian Rivieras, notably the celebrated Hotel Negresco in Cannes, similar in splendour to the Four Seasons Hotel Gresham Palace in Budapest. The Jackal has three different passports and is unidentifiable to the French secret service.

Deputy commissioner Claude Lebel, played by Michael Lonsdale, the unsung hero, considers that a public event will be the scene of an assassination attempt, despite the heavy security. And he is right.

In “The Day of the Jackal” film, actor Olga Georges-Picot plays Denise, a young ordinary woman with OAS ties who beds a high-up individual close to de Gaulle and extracts confidential information through pillow-talk.

The going was good until his telephone was tapped, bringing ruin to him and prison for her. As the security net tightens, our devilish friend the Jackal returns to Paris, undercover at a lesser known spa bath, similar in ambience to the Rudas on the Buda and Duna riverside.

All finally rounds off on Liberation Day, August 25, 1963 when a grand military parade takes place in line of sight from the Arc de Triumph. It reminds that something similar could be held at Parliament Square or Heroes Square in Budapest. The Jackal is finally in position at the window of a top-floor flat after two months’ preparation for this day.

With de Gaulle’s head in the sights of his rifle, he fires – just as the President takes a customary bow, and survives. It is a dramatic and conclusive ending, with the almost perfect assassination almost taking place. (As a footnote, General de Gaulle was President until 1969 and died in 1970.)

Although a dated and closed-case film, it still has cat-and-mouse relevance today. In addition, the film shows a time when everything was still handwritten, typed and filed before the rise of computers and the internet. Thus communications and the processing of general data were slow and ponderous tasks, sometimes taking hours or even days to produce, provide and deliver.

Finally, what also makes this film refreshingly real and cosmetically void of all “heroes and villains” stereotypes is the fearless and dashing assassin. The debonair Fox, although clearly handsome, well-dressed and gentlemanly, takes to the role of the bad guy who is vengeful, ruthless and without remorse.

While the hero, the far more respectable Claude Lebel, is a very ordinary, down-to-earth type with a plain dress sense. Even so he is the obvious mastermind who finally terminates the suave Jackal at the last defining moment, as he fulfils his duty by helping to save de Gaulle’s life.

If you are a devotee of this book and film, you will hopefully appreciate this article. There are other Budapest landmarks, such as market-stalls, a prison and a train museum all close by, which also relate. But how long it will be before this article loses its relevance due to new high-rises dawning over the Pest suburbs is another matter.

“Homework” follows for me to visit the Petit Clamart suburb when next in Paris, meanwhile the outer Pest neighbourhoods will do. But for all it is worth, make these spectacular rounds, regardless of the Jackal, and see another side to retro Budapest while the going is still good.

This matter could easily be a large photographic study with many comparisons, but I have to stop somewhere. How fitting may it be to round off with an old-style “top window” view of Hősök tere? Which is sufficient, I hope, to make my final point. So take to and enjoy the illustrative Jackal tour of Budapest. 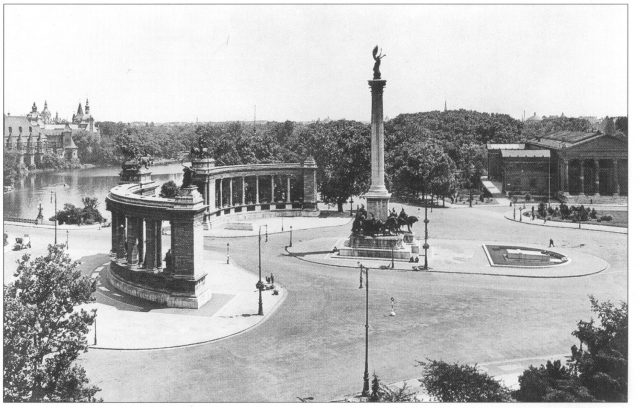