Enter the dragon at Kőbányai út

Chinatown a hidden extra to the city

Written by Alexander Stemp
In its global abundance, Chinese cuisine is familiar and plentiful nowadays, marketed in the same way as “European food” and hamburgers alike. But as for Chinese culture, this is another matter altogether for the many who, like me, know little more than what comes across in periodicals and other media day to day.

But for a brief insight, I recommend making something of a start by visiting the newly developed Monori Center in Budapest’s District X. Although this small hub presents itself as a wholesale market, the neighbourhood is also an up-and-coming family-friendly locale, tucked away in the not-so-illustrious Kőbánya suburbs.

Now officially known as Chinatown, this is where some of the best Chinese food and restaurants in the capital are found, and makes for a pleasant stroll along the main Jegenye utca promenade. As well as serving up the real thing both to their own people and to passers-by alike, these establishments are similar in décor to the real things back home when compared to most of the standard, less elaborate Chinese restaurants elsewhere.

Don’t dwell too heavily on Chinese stereotypes to guide you there. The architecture in this sullen, remote part of the city is as oriental and exotic as elsewhere within the often dreary Pest suburbs – in other words, not much. But fear not, some lanterns and calligraphy do finally appear.

Perhaps, it is also fitting to say, the Monori Center is not a typical expectation of a Chinatown, as depicted in various films and stories that brim with noise, activity and opium dens overflowing onto streets that are naturally lined with pagoda-shaped buildings.

At first sight, expect clothes and domestic shops and the aroma of local cuisine in this modest abode. In this sense, yes, the Monori Center is a bit too reposeful than expected. But I am sure things will liven up when it comes to Chinese New Year. Until then it gives the impression of an up-and-coming neighbourhood.

In addition, there is an exclusive hotel, a doctor, a Chinese school, a newspaper production company and a sense of community. Immediately the Monori with its irregular but striking allure has something worthwhile to offer and makes for an eventful outing.

Remarkably, and perhaps not knowingly, Budapest is home to the largest Chinese population in Central Europe. Compared to higher profiled westerners with their rhetorical values and declamatory enterprises, these are a more reserved and far less boastful people. They also came to Hungary and other former Iron Curtain regions post-1989, with as many similar reasons, but far less is mentioned about them.

There are often other Chinese stalls throughout the city and nationwide that remain resolutely far from the spotlight. Such as the one where I am frequently greeted at the Bosnyák tér market in the Zugló district. These people are usually hands-on in catering trade or at stalls trading imported goods from their homeland. Many live in the easterly suburbs and habitually labour in earnest from dawn to dusk. Some have settled and integrated into Hungarian society, others move on to Western Europe. Then there are those who return home.

In recent times a new generation arrived. Unlike the first wave, many newcomers are more high-tech and cosmopolitan. They are generally better-off and have greater chances of succeeding than their predecessors. Some live in the privileged Buda Hills, having left their former working-class lives behind. But many from both before and now still work the treadmill, as ever.

One distinguishing feature relating to the clothes shops are the sometimes original but often surreal names many have. Such as Sun Bird, Moon Girl, Z-Boxer (I assume this is to be pronounced in the American way, Zee-Boxer) and my favourite one so far, “R-Marks”, as in Remarks. And so forth.

The virtue with all one sees is that the products are distinctly cheaper than elsewhere and make a refreshing, uncomplicated change to the overpriced and imposing central city shops with their highfaluting and superficialdom. In some cases, the quality is also similar.

When you have walked around the Monori Center immediate area and got the gist of what’s in store, round off the occasion by stocking up with delectable oriental delights at the compellingly named “Duna-Panda” supermarket. Should you be in need of something oriental, or closer-to-home products such as common, regular-branded coffee at discounted rates, this and more can be found there.

When accomplished, return to the main Kőbányai út in the direction of the city. Crossing the heavily congested Hungária körút juncture, 50 metres further on is the “Eurázsiai Center” market, confined to rows of very derelict warehouses and their immediate run-down enclosures. This is another matter altogether, as all of a sudden, compared to the quaint and orderly Monori Center, here is a wilder, no-frills scene with stall holders and bargain hunters alike.

To add to the “welcome”, there are very telling “No photographs allowed” signs when approaching these premises, which contributes to taking caution in the heady atmosphere of intrigue in this edge-ridden place. It is quite a contrast to the presentable, more refined and well-organised Monori, and certainly to the over-swish and luxuriant Váci utca shopping promenade. 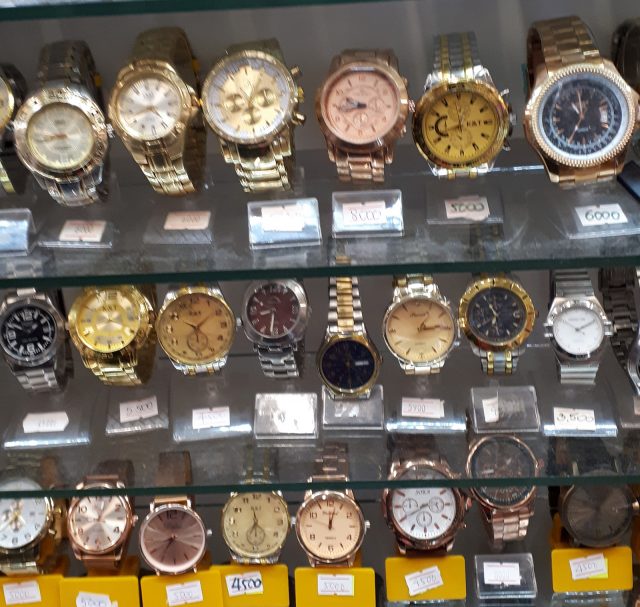 When overcoming these immediate matters, I sensed that this is a place where anything goes (and comes?) if the price is right. Whether it’s alluring and perhaps elicit gold watches, perfumes, toys, electronics or the whimsical carpets that duly fly out, it’s non-stop bargaining all the way.

With such a contrast, it was enough for me to briefly “forget” I was in Budapest, as well as in Europe, due to the general atmosphere and commotion while there. Many of the habitués went about their way distorting the Hungarian and, dare I say, English languages alike when dealing with me. But good things and a smile are to be found. You might also get a receipt but don’t expect a guarantee.

Despite the ruffled appearances that the buffets also possess, many serve delicious food at low cost. So, make it a duty to fit in and order a plateful of fortifying pancake rolls.

Certainly there is a difference when there, not that it matters. I was charmed by this unexpected place, even so I would not want to be caught taking photographs there.

Plenty of public transport passes by. Trains from Nyugati take 10 minutes to Kőbánya álso, then briefly follow the tramlines on Kőbányai út until obvious completion. Then proceed in a straight line along this same road to the apparent Euro-Asia warehouse stalls.

The number 28 tram from Blaha Lujza tér makes frequent stops along the lengthy Kőbányai lane. Thus allows seeing both sites in one go with less effort. Should there be cultural presentations at the Monori Center about life on the Orient, I shall attend.

Although it’s a balancing act between quality and budget every time, it’s easy to see why these modest premises that flutter in the shadows are popular. Many local people are fatigued by the extortionate modern-day shopping centres and are willing to explore elsewhere.