Five matchdays in three weeks to see out 2020

Written by BT
LaLiga’s “ Kick Out 2020” Christmas campaign is set to celebrate the five matchdays that will be played over the holiday season, marking the occasion with more than 50 activations across 30 countries around the world, and including Budapest.

Show performances, displays on the streets of each continent and impressive projections onto iconic buildings worldwide, plus prize draws and events, both physical and online, will engage with fans of the top Spanish football league worldwide.

Despite the difficult health situation, football fans in Hungary have been able to stay close to one of the world’s top leagues with a projection of the campaign displayed on the facade of Café Gerbaud in central Vörösmarty tér, Budapest.

The projection, which was made by local company Centrum Production, was accompanied by the LaLIga Santander trophy and LaLiga’s official match balls, and passers-by were entertained by freestylers Zoltán Lipták, Maté Hajagos and Milán Szabó, members of FreestyleFoci Club, who featured in collaboration with LaLiga’s global sponsor Puma. 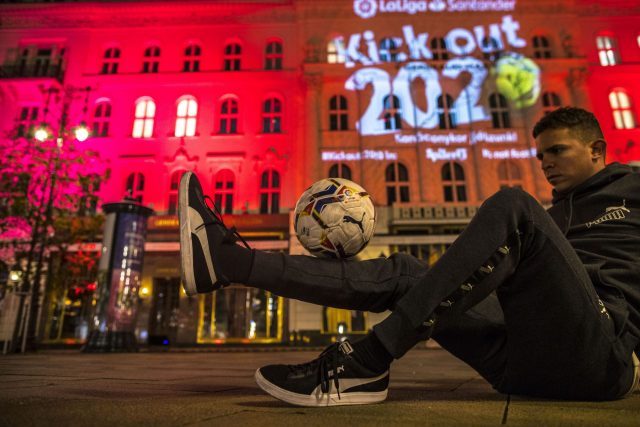 This holiday season sees five LaLiga Santander matchdays played between December 20 and January 10, with enticing matchups such as FC Barcelona versus Valencia CF and Real Madrid versus Granada CF on the cards.

The schedule will also throw up a series of promising derbies: the Basque Derby (Athletic Club de Bilbao and Real Sociedad), the Grand Derby (Real Betis versus Sevilla FC), in the Community of Madrid (Atletico de Madrid versus Getafe CF) and in the Valencian Derby (Villareal CF versus Levante UD).

Follow LalIga’s social media platforms to see the final video and the Café Gerbaud activation in Budapest, and see the passion of LaLiga this Christmas on Spiler2TV.