An energising day out at Somoskő Castle and valley

Written by Alexander Stemp
For a not-so-demanding and liberating mask-removing day out, I highly recommend a visit to the family-friendly Somoskő Castle, sitting on a 526-metre redundant volcanic peak in the hilly and forested Medves valley of Nőgrád County. But it's not enough just to go there. This geopark and its surroundings, under UNESCO heritage and protection orders, come with plenty to see and do.

As for this hamlet itself with its crown jewels, Somoskő is divided by an official borderline with Slovakia. The village and part of the hill are on the Hungarian side. The fairytale-esque main feature and bigger proportion of this mound are looped in and known as Hrad Šomoška, by the northern Slavic neighbours.

Regardless of frontiers, from the splendid nature trails we can see the unusual foundations of this imposing sight, particularly on the Slovak side. The outer surface at this point is made up of a range of basalt lava formations. This liquid rock hardened into curved “columns” more than four million years ago, pouring downward towards what is now a pedestrianised walkway. Such basalt columns are rare and make essential sightseeing for professional and amateur geologists alike. 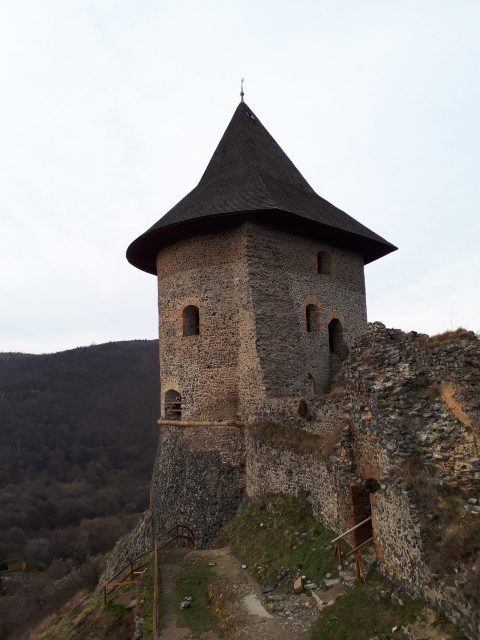 There is not much history to go on. This quaint castle with its distinct conical lookout tower dates to 1291, at the time of the King Károly Róbert era. The Turks occupied it from 1576 to 1593. Finally, the fortress returned to the Losonczy family before the Tatar tribe attacked and set fire to it in 1682.

During the 1704-11 reign of nobleman Rákóczi Ferenc II, Somoskő Castle escaped the emperor’s command to destroy all nearby fortresses. Even so, these premises were already in decline. And after being struck by lightning in 1826 the castle went into long-term abandon until restoration work began in the 1970s.

These days it has become a tourist attraction, with one of the three former towers fully accessible and easily seen from afar. It is great to see that this landmark has returned to some former glory and is generally appreciated today.

The footpath towards this peak passes a shrine to Hungarian poet and revolutionary Petőfi Sándor, 1823-49, who is still celebrated. There is also an obvious but not too imposing Slovak signpost and raised frontier barrier, clearly intended for sightseeing pedestrians only.

When “over” this virtual line, continue towards the cashier. From there the path splits two ways. One clearly leads to the castle itself, where momentous panoramic views await. The other goes downwards to the characteristic basalt formations. But beware: although generally safe, snakes and lizards live within these structural confines. It’s best advised to keep children close by.

Remarkably, when visiting recently there were no restrictive COVID measures. Nor were there any officials. Thus it was possible to walk in either country, regardless of surveillance. Still, it’s a long way to the nearest main roads and towns, if so desired.

For all else in this area, I advise taking a map and weatherproof boots. The next landmark, through myriads of beech trees, is Salgóvár Castle, some five kilometres further on, either by car or by foot, directly through the forest. It is a pleasant enough site in relative walking distance from Somoskő Castle. Close by is an information centre, a bus stop and a children’s play area. 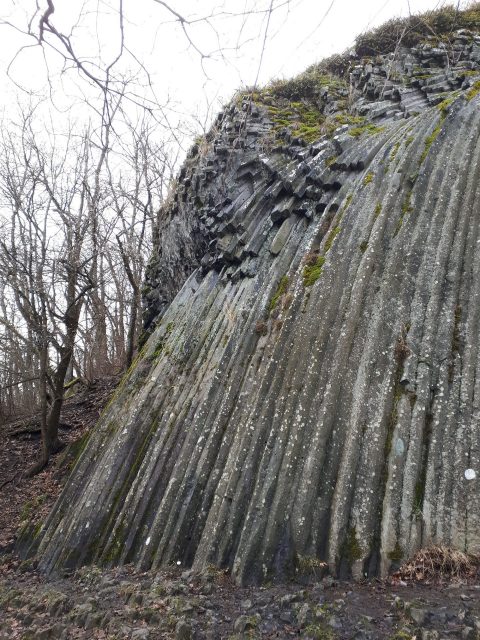 It’s advisable to bring a picnic. Don’t expect to follow in the footsteps of Hungarian royalty from one castle to another via hot-dog stands, cake shops and the pub, like one does when out and about in the far easier-going Buda Hills. If this itinerary is too much without these random perks, then return to Normafa. But for those who know better, take to the splendour of this wilderness at any time of the year and leave the crowds and all else behind.

Although public transport provides, to get there is best by car. The 120-kilometre journey from Budapest to Somoskő takes about 90 minutes. Join the M3, turn off at halfway point Hatvan and head northwards on the “Number 21” road, to Salgótarján. Beyond this point, continue on towards the nearby Somoskőújfalu/border. Then look out, just before this juncture, for a right-hand turn back road that leads towards the off-beat and remote Salgóbánya.

A short time later, while ascending upwards on this windy route, follow all relevant signs until obvious completion at this rewarding landmark. If you left your lunch behind, then fear not, as stocks can be replenished at Salgótarján.

But if time allows, or it rains, see Salgótarján’s worthwhile Nógrádi Történeti Múzeum Bányászati Kiállítóhelye, a fine mining museum. Visitors can enter a section of the coalmine and get familiar with mining equipment. Although this gumptious industrial town in no Eighth Wonder, with its numerous tower blocks contrasting with the scenery, it does have has some intrigue.

I was once tipped by a local of the town, with some ironic cheer, that “Salgótarján is famous for not being famous”. To find out why can be a mission for a rainy day, as my family and I will return to this rhapsodic region for sure.