Szolnok with an unexpected Estonian twist

A tale of two Tallinns

Written by Alexander Stemp
This wintery, restricted-action January I yearned for a day out. It did not matter where. In haste, I took the first train out of the city and went to Szolnok. I had no real aim in mind other than to be the mere tourist for a few hours. And with much still closed and inaccessible, I knew I was not going to get too far, other than to see the apparent sights at surface level only, let alone write anything splendid afterwards. I did not mind too much. Initially it was enough just to get away and clear my head. But then came some self-dissatisfaction. How could I go anywhere without picking up on something intriguing along the way, regardless of obstacles?

Finally I achieved this goal, but not because of what I saw in passing with the town centre, which amounted to mild, tourist cliché story-telling only. Even so I enjoyed the peace and quiet by the unruffled River Tisza, which is a story in itself. But even then, the thought of trying to conjure up anything at this time, considering much tourism is still under wraps, remained most unlikely.

That was until after I saw the main sights, which consist of the stand-offish Mayfly Bridge, the dimensional synagogue, the fanciful Baroque Roman Catholic Church, the architecturally elegant Szegő Gábor primary school and the contrasting Calvinist church, and a much-needed bakery, which was as much as I could hope for on that particular chilly day.

The Rose garden is off season. The Aviation Museum and the splendid main Damjanich János town museum are unthinkable at present. And for those beer drinkers out there, there is even an exclusive beer museum in Szolnok but it is also “time, ladies and gentlemen, please” for now. Much else still remains redundant in the pandemic. Except for these hindrances, all else relating to graceful walking and checking out the local scenery in this pleasant, quiescent place was as easy going as if I was in Szentendre.

And then the most unexpected thing happened, which totally caught me out.  Suddenly a local bus with “Tallinn” highlighted on a strong, illuminated display came passing by.

At first I thought I was imagining things. Thinking I may be ill and suffering from hallucinations, I went into brief decline over this bizarre and unexpected matter. What made this more remarkable is that my family and I were in Estonia last summer. Thus recalling anything relating to “Tallinn” is still fresh in our minds. To see such a bus destined was all too bewildering.

I felt concerned for my state of mind and maybe I should consult a doctor. But after sitting down briefly to regain my senses, another “Tallinn” bus drove by. Although relieved that this was no mirage or coincidence after all, suddenly I perked up and became intrigued by this remarkable finding. Then, and only then, did an assignment await me, and possibly an article too.

The first thing I did was to approach the nearest bus stop and read its timetable. Finally all became clear: it was not just “Tallinn” in itself as assumed but “Tallinn Városrész”, meaning “Tallinn Town Reserve,” and clearly this was a nearby suburb. 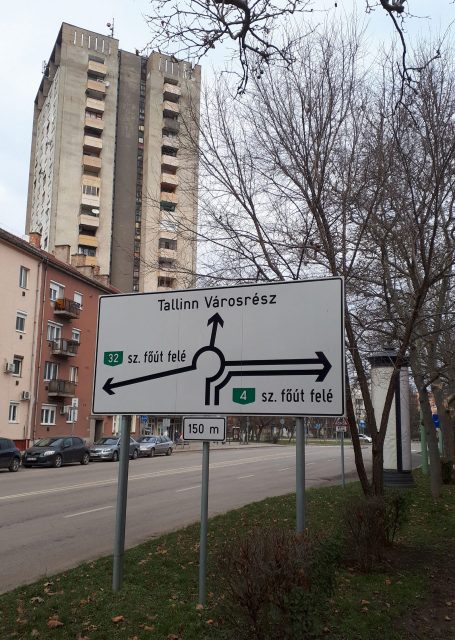 Tallinn or no Tallinn I had to go there regardless of outcome. This was only a short ride away, and passed road signs that reiterated I had not gone crazy, this time. Besides, what else is there to do during the plague and off-peak tourist season when there is nowhere indoors, other than on a bus or a takeaway buffet, to go to?

Eventually I arrived at this mysterious end stop within the tower-block district of the Szolnok suburbs, and that was it. Suddenly the Tallinn illusion was gone, at least then. There was not a sense of Estonian life or culture anywhere. Certainly there was little to celebrate but at least this gave me something to work on when back home.

With very little to go on, the outcome was not too remarkable. My Hungarian family concluded that this was neither surprising or a big deal. Apparently during Soviet times Szolnok was Tallinn’s sister city, but is no longer. Szolnok is now paired off with another Estonian town called Rakvere in the east of the country.

But, for my sake, to round off with some cheer and less embarrassment, I discover that there is a public transport stop in the outskirts of Tallinn called “Szolnok”. Unfortunately, judging by what’s on Google Maps, there is not much difference between Szolnok in Tallinn and Tallinn in Szolnok.

There is one redeeming feature within the Szolnok archive files. There was the “Tallinn Club Cinema”, built in 1973, though this spooky relic, on 9 Kálmán Kandó tér, closed down more than 20 years ago and remains a distant memory, as does the Soviet era itself.

There must be other nondescript tower-block locales in Hungary with equally extraordinary place names, representing far-off landmarks in the suburbs. These may be regardless of what’s in common with either places, other than being “looped” into the Soviet sphere themselves. In Szeged there is another “unexpectance” among a tower-block neighbourhood called Odessa, which lacks any of the grandness of the imperial and far-off Black Sea city. Certainly these premises were built during those times. It is hard to imagine these districts were going to be called London, Paris or New York by the authorities during that repressive era.

Moving on from this surreal matter, lesser-known Szolnok sits at the heart of the Alföldi, the Great Plain. Only 100 kilometres south-east from Budapest, it is very accessible and worth a visit. There is an alluring downtown centre atmosphere with much to offer. Although not many have been there, plenty have passed through, noting the delightful retro-esque train station whilst en-route to Transylvania.

In addition, Szolnok is surrounded by rich farmland. It still is an important cultural and economic crossroads and has been for centuries. For those who enjoy water sports, the resourceful river city provides plenty: boating, swimming, spa baths and so forth. 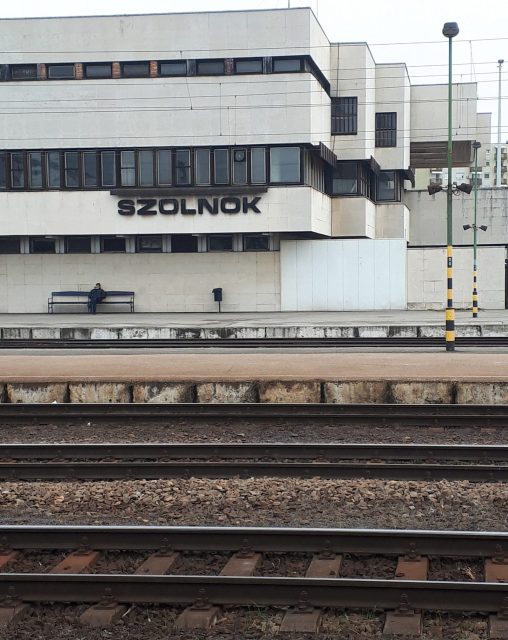 It will be great to return and see more. I really look forward to checking out the Tabán folklore house, which comes with exploring the artistic Tabán district. There is a Turkish bath, the Széchenyi Ecotourism Park Forest, the goulash festival, locally served fish soup and various riverside promenades and pursuits, which all are in easy grasp.

Szolnok’s most exclusive event relates to the Mayfly Festival each June, which celebrates the wonder of the mayfly, similar in vein to a dragonfly, as well as the splendour of the River Tisza. This would make a great day out for the family in this high, sunshine-filled place. The mayfly is a symbol of the city and is commemorated by the central pedestrian bridge, known locally as the “Tiszavirág híd”.

To get to Szolnok is either a drive along the busy Number 4 airport road or I advise to take the train, which leaves from both Keleti and Nyugati stations roughly every hour and takes a little over one hour to arrive. A bus ride or 15-minute walk from the station will take you to the centre. From there it’s easy to orientate oneself around this immediate area and riverside to all else.

Certainly I shall return and will anticipate working on a more promising tourist article when it comes to next time.

One thought on “A tale of two Tallinns”