Written by Christopher Osterberg
The online repository of 156,000-and-growing Hungarian photos taken from 1900 to 1990 and now posted in the Fortepan digital archive has been running a weekly article in a blog named Heti Fortepan for the past year, and now an English edition has been launched under the translated title Weekly Fortepan.

The richly illustrated series of articles in Hungarian has been running in professional partnership with the Robert Capa Contemporary Photography Center of Budapest, and can be freely republished with due credit. The first Weekly Fortepan Article in English was published in December under the title “Seventies in the Eyes of a Young Lad”, and features “Whimsical urban scenes in Sándor Kereki’s snapshots published after 50 years”. The article can be seen at https://hetifortepan.capacenter.hu/en/sandor-kereki/

It shows people in the grandstand keenly focusing on the trotting racecourse; children watching a car race from the roof of a car in the People’s Park; a man absorbed in reading the papers on Andrássy Avenue and many others. The “astoundingly great street photos” were shot by a boy from Budapest who started photographing as a grammar school pupil but had already quit this hobby at university. About 1800 of Sándor Kereki’s photographs are shared on Fortepan, some 50 years after they were taken.

The free-to-use Fortepan digital photo archive collects and shares pre-1990 photographs under a Creative Commons licence, free for anyone to use with attribution. The collection, which does not exist in physical form, was launched in 2010 and currently contains some 156,000 images.

Fortepan can be said to appeal to our inner voyeur: scrolling the site is like flipping through the Instagram accounts of thousands of Hungarians from the past century. The mostly black-and-white pictures, frozen moments from the lives of strangers, invite the viewer to create the rest of their stories: who were these three well-dressed friends clowning by the River Danube in the 1930s? Whatever became of this teenager sashaying like a model on Budapest streets in the 1950s, or the two boys who posed in sailor suits in 1910 and would have been soldier-aged by the time the First World War came along?

The joy of perusing the online collection is its random nature, offering a loosely guided tour of Hungary in the 1900s. As these are Fortepan photos, the majority were taken by amateurs capturing a moment instead of professional press photographers trying to create a historical record. This all adds to the allure, and it is difficult to quit browsing.

The pictures do provide a glimpse into Hungarian history, with shots of bomb damage, soldiers from both world wars, grim-faced children in patriotically themed school pageants, and tanks in the streets of Budapest in 1956. Simple snapshots from watershed years such as 1919, 1944, 1956 and 1989 serve as reminders that ordinary people were living ordinary lives while history went on around them. The everyday portraits, candid shots and past images of Budapest streets and Hungarian villages are a compelling part of the collection.

Named after a brand of photo negative that was produced in Hungary until the early 2000s, Fortepan’s digital collection was started by two schoolmates, Miklós Tamási and Ákos Szepessy, who began scooping up old photos at junk sales in the 1980s. They started their community photo website in 2010 and asked Hungarians to contribute photos, which were scanned and returned. If the donors give information about a picture, it is included as a caption, and the collection has some news photos with detailed descriptions, but the subjects of most images are anonymous. People turned over personal collections or boxes of memories left behind by a relative. Celebrities, politicians and famous photographers became involved too, adding some of the more official historical images. Generally, the only captioning is the year the photo was taken, and perhaps its location. 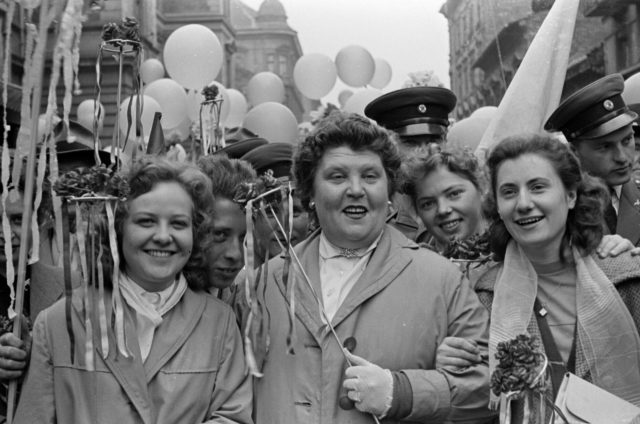 As well as being browsed, the photos can be download in high-resolution, free of charge. The descriptions attached to the images are compiled and edited by volunteers, utilising information contributed at the Fortepan Forum. They will gladly offer to process your photographs and negatives. If you have family photos you would like to offer, send an email to fortepan@gmail.com

The first permanent exhibition of Fortepan, KultúrFényPont, can be seen at Fény utca Market near the Mammut mall in District II. The free-to-visit display changes periodically, to showcase the diverse library that Fortepan has amassed.